January. It’s national puzzle month. I have no idea who declared that. Probably the chief hossenfeffer at Ravensburger, considering that they also offered us a deal on a schwack of new puzzles that few puzzle retailers could resist.*

Then the competition at Heye puzzles did a deal to compete with them. Naturally, I was weak and ordered them all… Where the heck am I going to put them?

“Tim! Get me the shelf stretcher!” (Editor’s Note: For those unfamiliar, Tim is our hard pressed and long suffering store manager).

Or maybe we can just Velcro them to the ceiling. Either way, we should have them all out for sale by January 10th.

When is the last time you worked on a jigsaw puzzle? If it’s been a while, you should consider getting a piece of the action again. Puzzles have come a long way in the 20 years since I started selling them.

The following is based on a true story. No meeples were hurt… 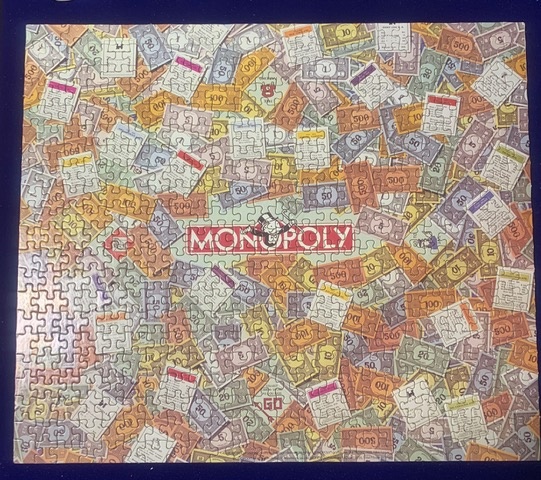 I, of all people, should know that puzzles have evolved - I just finished the one pictured above. It was trying to pass itself off as a board game, hidden in my stash of games for 15 years… I can’t remember where I bought it. I think it was part of a stack or box of “games” at a garage sale. It was squirreled away with my Monopoly games. Kind of like those little stuffies in the claw machine in Toy Story. Smart puzzle.

My wife said she was not surprised that I was finally doing the puzzle. I asked her, “Why, because I love Monopoly?”

She said, “No, because you love handling money.”

This was a fine puzzle inDEED. Amazingly none of the pieces were missing.

I returned to doing puzzles in 2016 as a way to help deal with the end of day stress and change gears prior to sleep. Since I’m often too tired to focus on a one-player board game or a book, I find the puzzles help. I do not watch TV. I can’t even spell Netfilx. Add one glass of red wine (which releases...now what did that book call it I read on the airplane in 2015? Melatonin?), some relaxing music, and let the brain forget about the day’s issues for a good half hour to an hour. Of my entire playlist, “Money” by Pink Floyd was the best selection for this puzzle.

Two months ago, I also did a 300 piece Hawaii puzzle with the missus and Don Ho came to our rescue.

Last year I finally started on the puzzle from hell. It had a price tag on it from value Village and I recall buying it around 20 years ago. The puzzle was called “To Kill a Mother-in-Law”. I bought it mainly as a bit of a joke, to leave lying around on the kitchen table while my wife’s parents visited. I knew my dad (I should say father-in-law) would get the joke, but I was not so certain about my mother-in-law, so the puzzle stayed in deep hiding and I stayed married.

With a marriage well cemented after 27 years, I felt I was safely out of the danger zone and took this baby out of storage. Signs of trouble first arose when I made my first rookie error. The puzzle was bigger than the puzzle assembly board I was building it on. Dummkopf! Oh well. After begging for my employee discount and getting a larger puzzle board, I finally finished the border and was dumbfounded to find it didn’t match the picture on the box. What the…?

So I carefully read the back of the box description where it said the photo on the cover of this murder mystery puzzle does not match the actual picture of the puzzle enclosed.

What madness is that?! Who would be crazy enough to buy a puzzle (even USED) without a picture on the cover of the box that matches the actual puzzle? Step up, one not-so-attentive store owner. 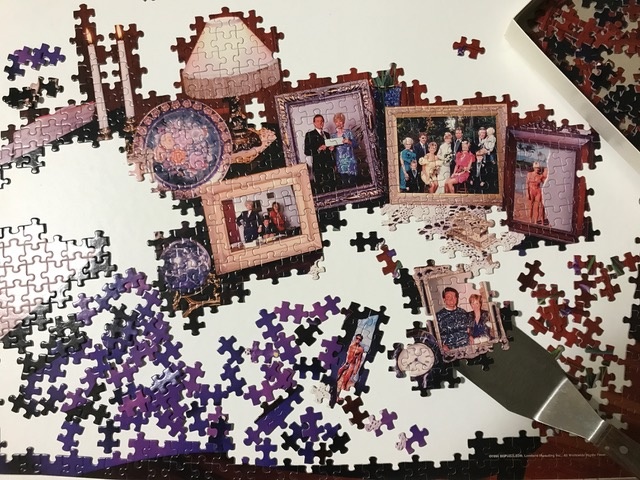 Tools are so important in a puzzling situation like this. Note the use of a spatula to carefully relocate an assembled section to its suddenly discovered correct location! Joy! [Drinks some wine].

My playlist while assembling this puzzle: “Murder Mystery” by The Velvet Underground, “Murder by Numbers” by The Police, “Murder for the Mission” (ugh) by GG Allin, “Mamma Mia” by Abba, “Mother and Child Reunion” by Simon and Garfunkel, and Pink Floyd was back with “Mother”. And just to be safe: “The Crystal Chandeliers” by Charley Pride (this was a late addition…the inside of the box showed a large chandelier but none was presenting itself in the actual puzzle).

I was becoming increasingly concerned about the incredible number of all-black pieces that were in the box as I continue through the assembly process. Holy crap. Just about 1/3 of this puzzle is entirely pitch black pieces!  More madness! This wasn’t a puzzle… this was torture! Wasn’t there a Geneva puzzle convention in ’37 in the city of Jigsaw outlawing this? Maybe it was Warsaw… I always get those two mixed up. 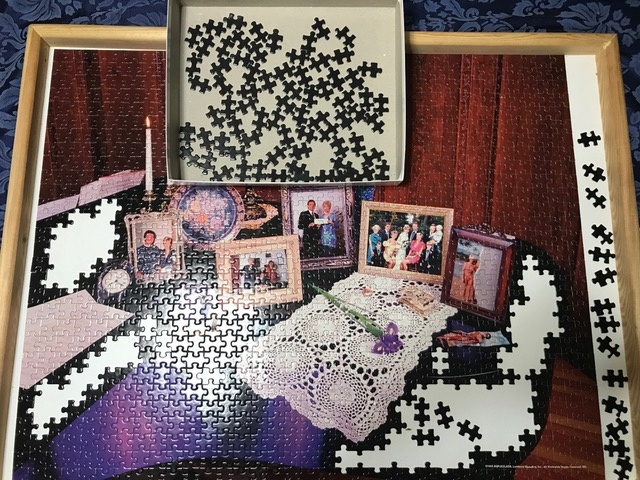 This was not a puzzle with a lot of uniquely shaped pieces either. They were all very similar in size and shape and nothing in my Google searches would help me. I even snuck out from work during one of my lunch breaks and took the puzzle outside in bright daylight with the hopes that I could see some subtle difference in the shades of black on the pieces - but no luck.

My only remaining strategy seemed to be to arrange all the black pieces carefully, in horizontal rows, so I could tell the subtle differences in the shape of the pieces and hunt down their potential locations... And to get more wine.

The puzzles gods whispered, “You must not give up! The pieces are all there. You should have counted them first you dummy.” 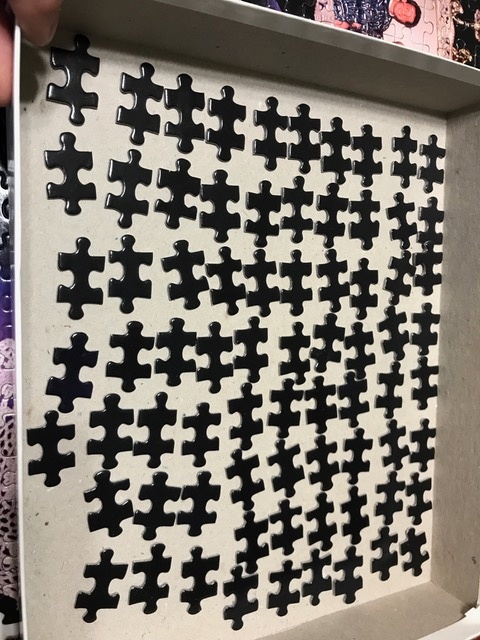 You can see that anxiety adds a certain amount of suspense to building a used puzzle. You’ll see a spot in the assembly where a really unique, perfect piece, has to fit. But then, you can’t find the piece in the lid where you carefully arranged them all and you think, “Maybe that one is missing. I have to move on. Look for another option. You paid three bucks for the damn thing used. Get the job done!”

It was war. The puzzle vs me.  The Beatles song plays in my brain over and over, “Come together”. (Another late addition to the playlist).

Somehow, I did complete the puzzle - no missing pieces! This calls for a toast! More wine!

The final dozen minutes or so in a puzzle are so rewarding. You know the end is near. Your heart starts beating faster. Your hands are moving faster than your brain is thinking. You forget to nibble on the doritos. (For red wine I recommend the Zesty Ranch). The pieces are now practically jumping out the box lid and into the matching spots, you just have to coach them in there.

With this puzzle complete, I then waited for the return of the missus the next day to admire my determination (“Oh, you did it?!”) and then read the murder mystery which we had to solve based on the completed puzzle. She figured out most of it. We went with her theory and read the answer to discover…we were right!  Mission accomplished.

So, I shrink wrapped the puzzle and put it out on the sales rack, used for $10. Not unlike games, puzzles get to live a lot of lives and lever a lot of love.

If you'd like to take the dive into the puzzling game yourself, you can browse out selection of puzzles here.

*Note: According to nationaldaycalendar.com: “Started in 2002 by Jodi Jill, National Puzzle Day was created as a way to share her enjoyment of puzzles.  As a syndicated newspaper puzzle maker and professional quiz maker, Jodi Jill developed classroom lesson plans especially for National Puzzle Day and the popularity has grown year after year.”

National Puzzle MonthPuzzles
John Engel, Lord of the Castle
Be the first to comment... 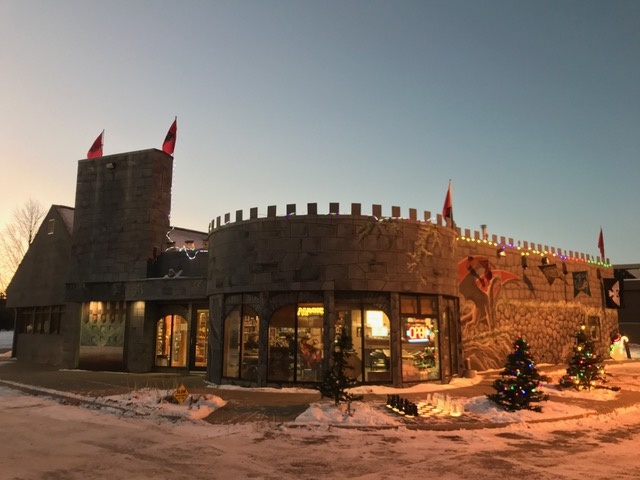