Did you just finish your Pandemic Legacy Campaign and you don't know where to go from there? Are you looking to play something other than Catan for the millionth time at your weekly board game night? Are tensions high within your play group and you need a game to help calm things down? If you answered "yes" to any of these questions, then the folks here at Mission: Fun & Games and Boardgames.ca have some bonafide recommendations if you're looking for something new to play! 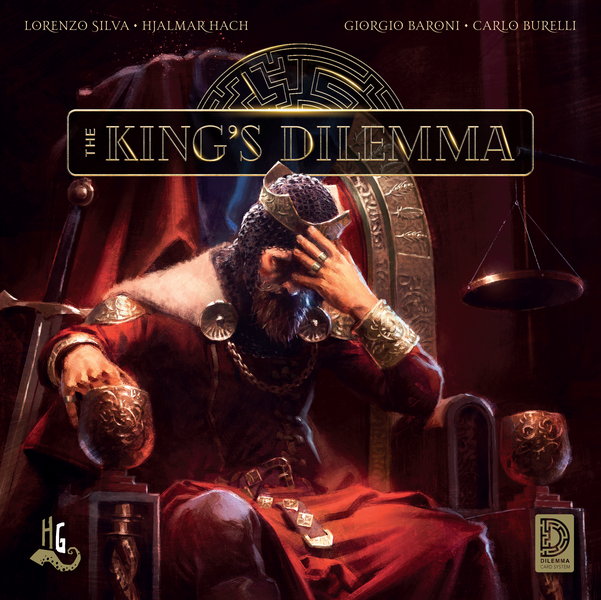 A board game for those that like TTRPG's! Play the role of a Duke or Duchess and bribe or swindle your way to glory or infamy. This legacy game has you voting on decisions that will benefit (or harm) your Duchy and potentially lead to the downfall of the King! I typically don't do well with bluffing and voting games, but this title is great because you are given clear objectives to try to achieve and a character archetype that you can really play into! 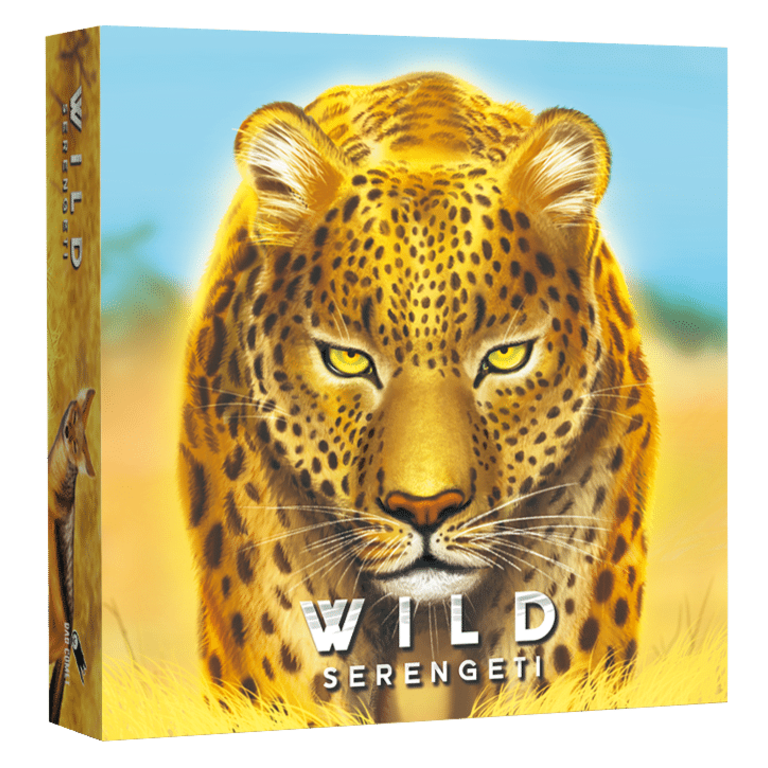 Become a nature videographer on the plains of Africa! Providing an excellent mix of worker placement and puzzling, attempt to place and line up different animals to capture your perfect shot on a common play area while your opponents do the same! 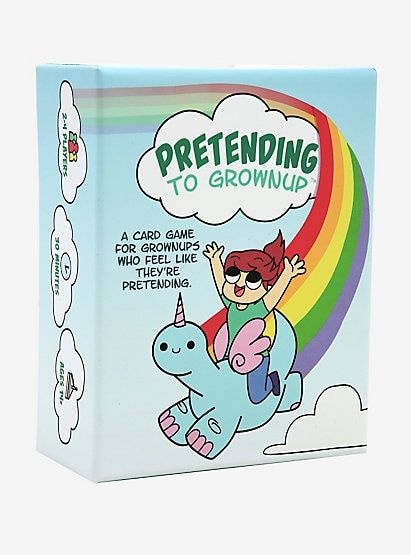 My pick this month is a cute and fun little game called "Pretending to Grownup", and it is as entertaining as it sounds! The art featured in this 2-4 Player card game is made by Web-Comic artist Megan McKay, and features dozens of other well known web-comic artists such as Cyanide and Happiness, Sarah's Scribbles, Owlturd Comix, Tiny Snek Comics, and many others! The goal is to use a bit of strategy to earn more points than the other players by squabbling with their Grown-up resources, Energy, Time and Money. But you don't need to squabble over adult things if you don't want to, you can choose to draw more cards, or Daydream, which gives you a boost in your resources in later squabbles. Oh! And the game takes less than 30 minutes to play, so it is easy to just pick up and play!

The Art and captions on each card are really funny, and some are way too relatable! 9/10 Will play again! (Would have given a 10, but the instruction booklet is short and a little vague, so you may need to be adults and make fair improvised rulings in certain situations. 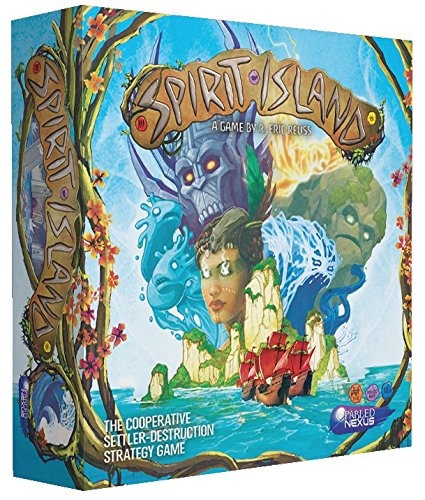 There is an abundance of games out there that play out the colonial power fantasy of claiming "unspoiled" land and bending it to your will. Spirit Island lets you flip the script in an incredibly refreshing way. Taking on the role of primal spirits to Protect your island paradise from plunder and conquest. Spirit Island takes full advantage of this premise with some of the most thematically reflective mechanics I've ever encountered. Best of all with a wide collection of adversaries and spirits (each playing in a wholly unique way) and some of the most customizable difficulty settings in any boardgame ever, Spirit Island is an immensely replayable game. 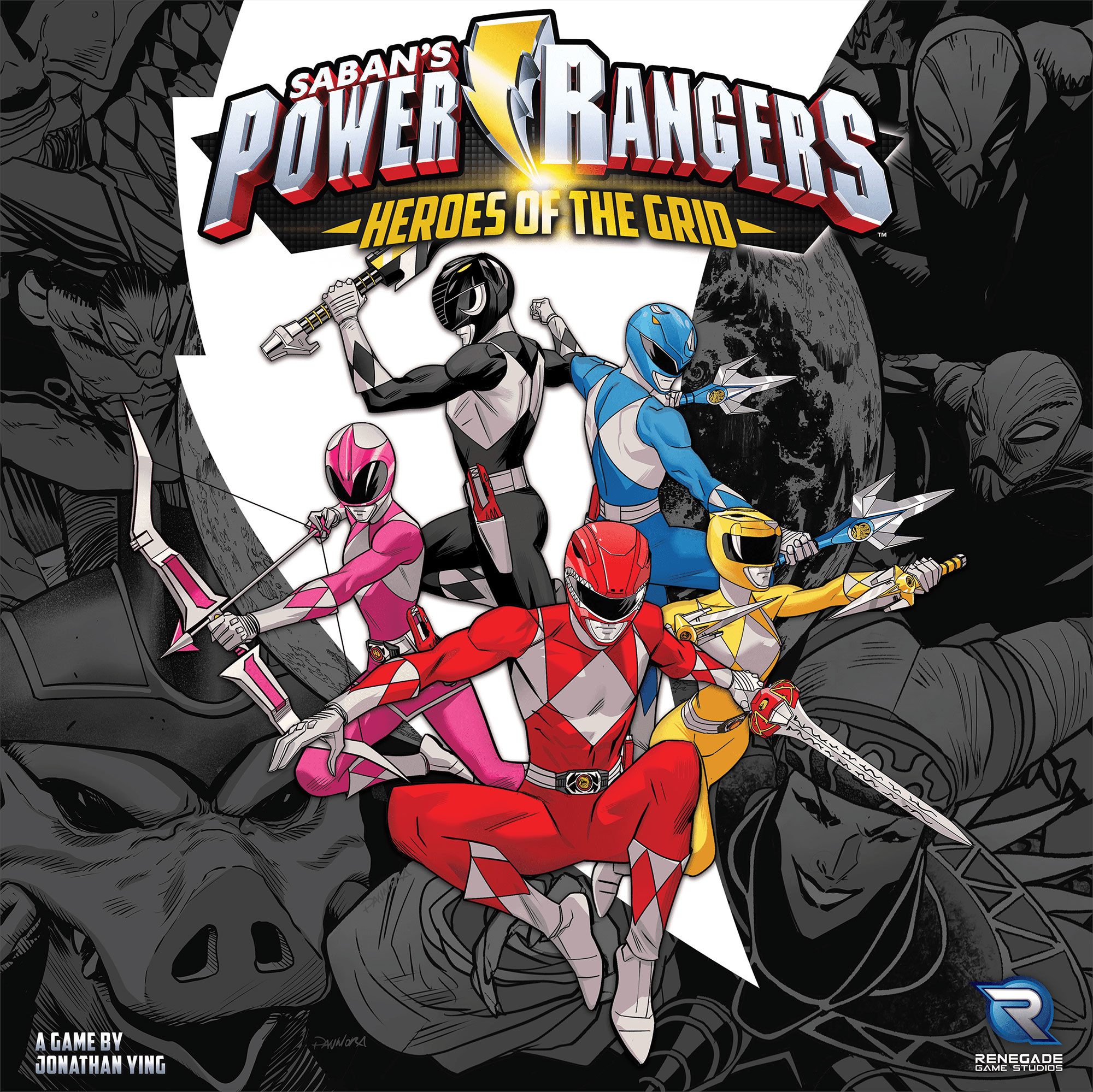 Aye-yi-yi-yi-yi what a difficult game, but so much fun and requires a lot of teamwork.
Everyone picks a Power Ranger, each Power Ranger has their own unique deck and play style.
Everyone decides which monsters to fight from classics like Pudgy Pig and Knasty Knight.
Using some very satisfying card and dice combos with your teammates you must defeat all the Puddy's, monsters and big baddie, Rita Repulsa before all the locations get overrun.
Plus there are tons and tons of expansions giving you more Power Rangers, Minions, Monsters, Big Baddie's, and even a massive Megazoid to replace that little token. 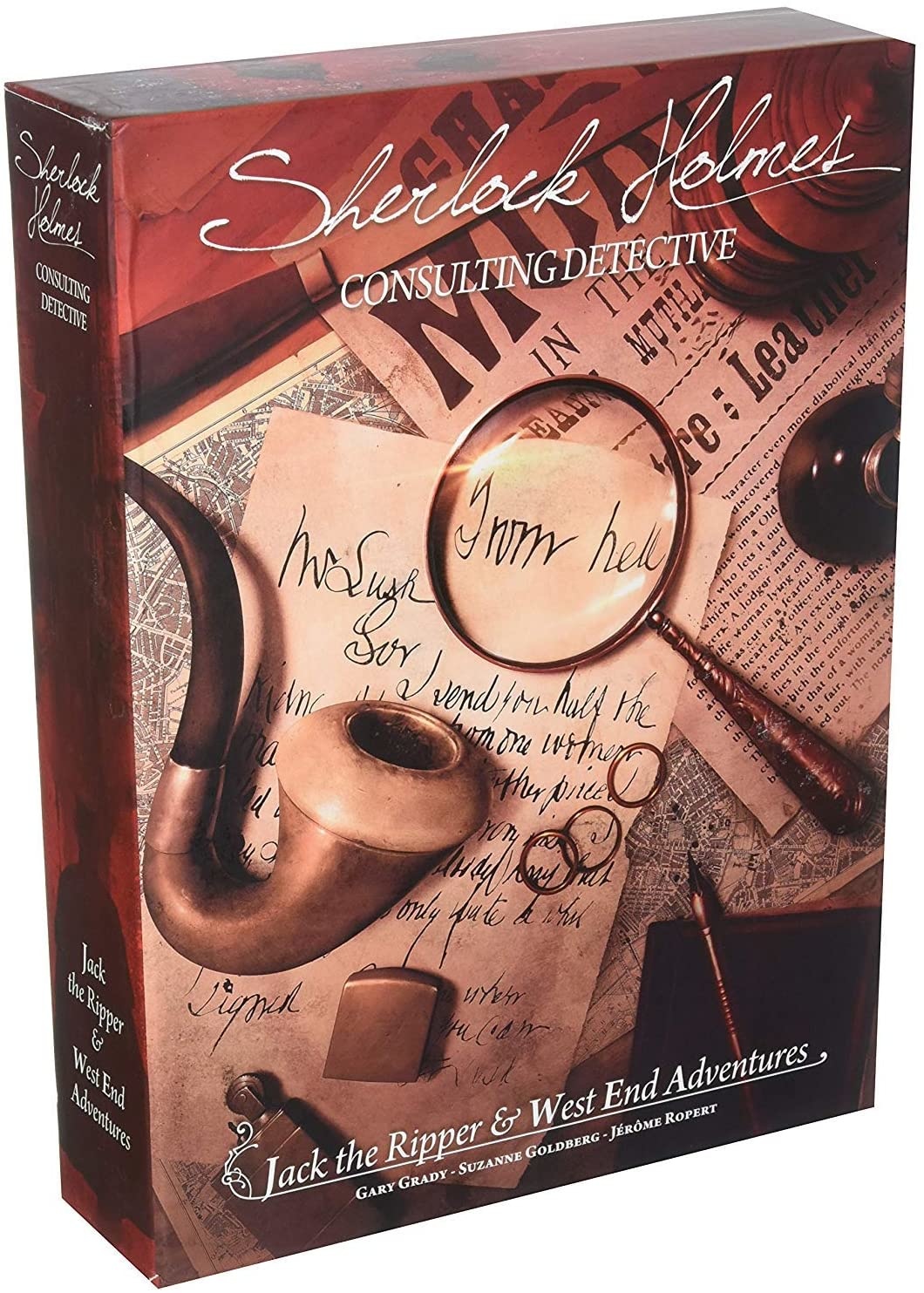 My favourite game currently is Sherlock Holmes Consulting Detective: Jack The Ripper & West End Adventures. As someone always looking for a game that can be played by ones self, this one hit all the marks. It's easy to pick up how to play but far from too easy to solve. There is deduction, puzzle solving and just a wide variety of things to keep you engaged. Plus you get to see how you stack up against the great fictional character of Sherlock Holmes when each case comes to a close. 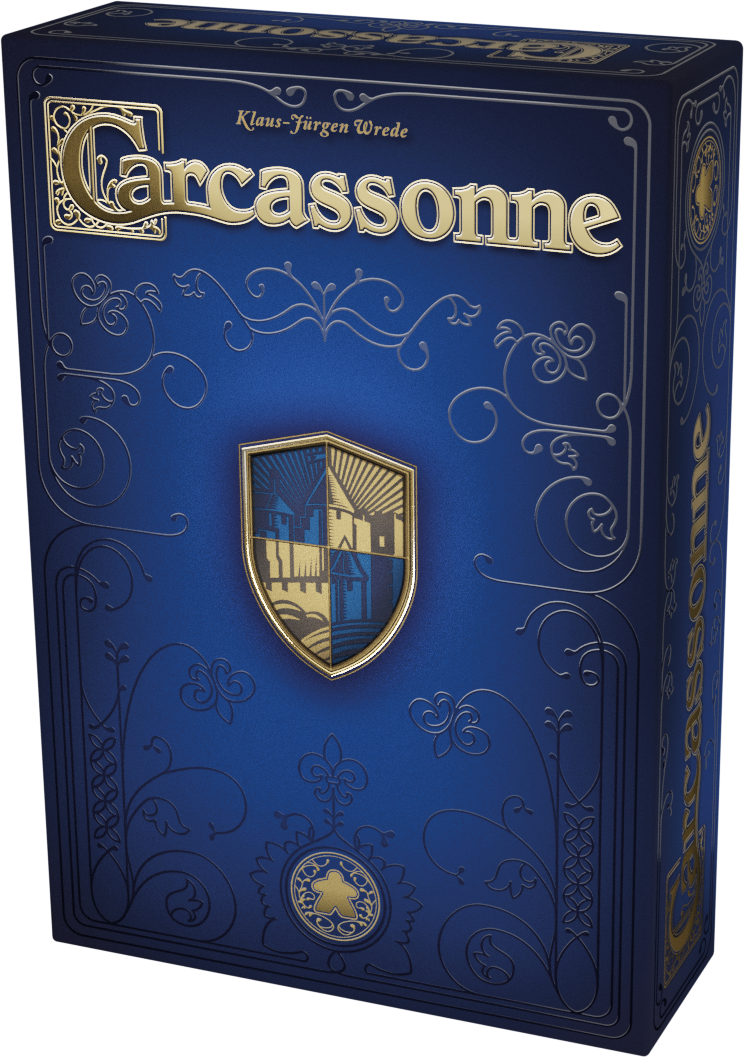 My staff pick would probably be Carcassonne! I got to play the 20th Anniversary Edition and quite enjoyed it. I like how Carcassonne will have a different layout each time you bring the game to the table, as each player draws a tile on their respective turns. Careful when building cities in the games as someone could place a tile and cut off your chance of finishing the city. Don't get too comfortable in first place though! At the end of the game you will score points based on various criteria such as the monastery you built and how many tiles surround it, incomplete roads and fields surrounding your cities. I hope you enjoy this game as much as I did! 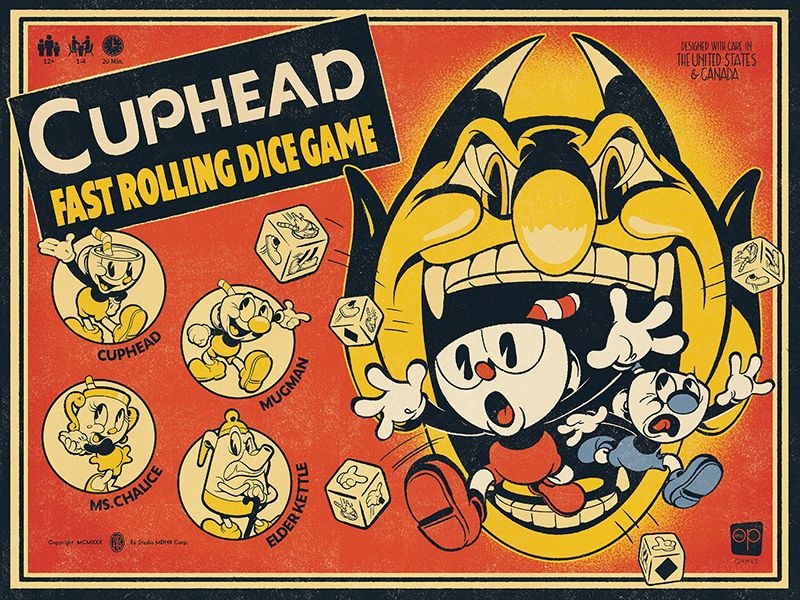 Inspired by the award-winning videogame of the same name, Cuphead is a frantic dice-roller requiring quick reflexes and a little bit of luck.  As a co-operative game, teamwork will also help you take down these challenging bosses.  As a solo game, you have the opportunity to heal yourself in order to persevere.  Featuring a plethora of fantastic artwork and custom dice, Cuphead is an immersive experience that will constantly leave you wanting to play one more round. 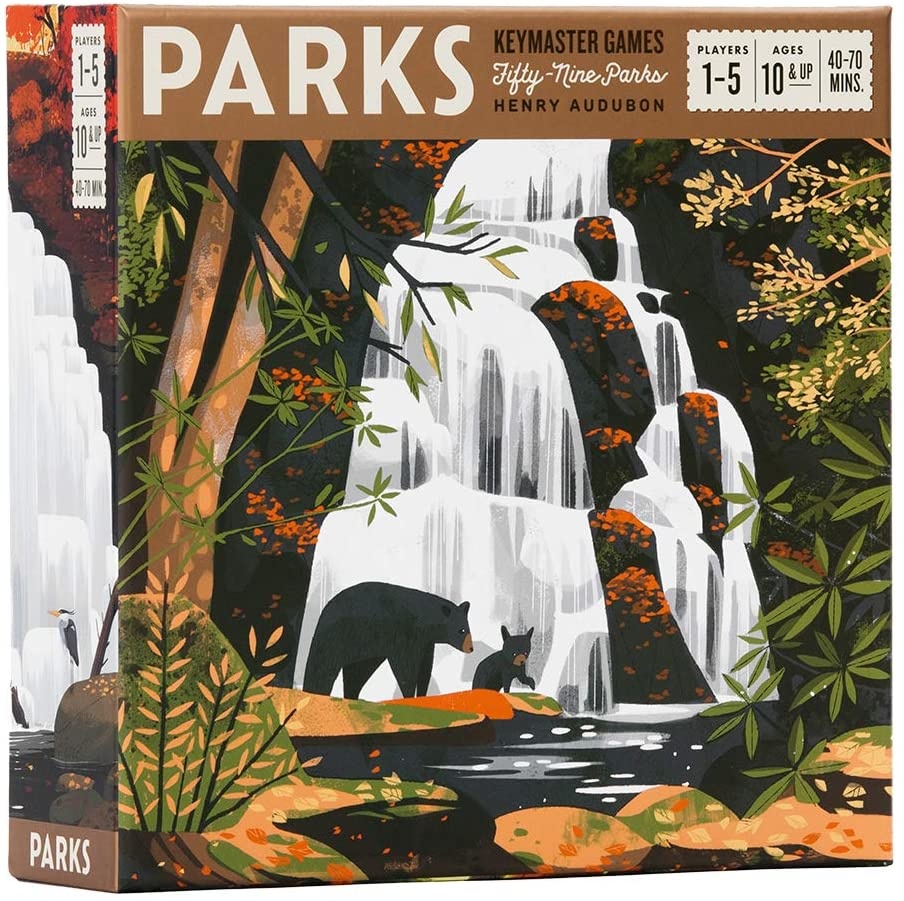 I played this one with my wife as an attempt to skew myself from the typical combat based games I like, Parks was a huge refresher and a beautiful experience with a simplistic resource collecting gameplay complimented by truly breathtaking art of national parks across America!