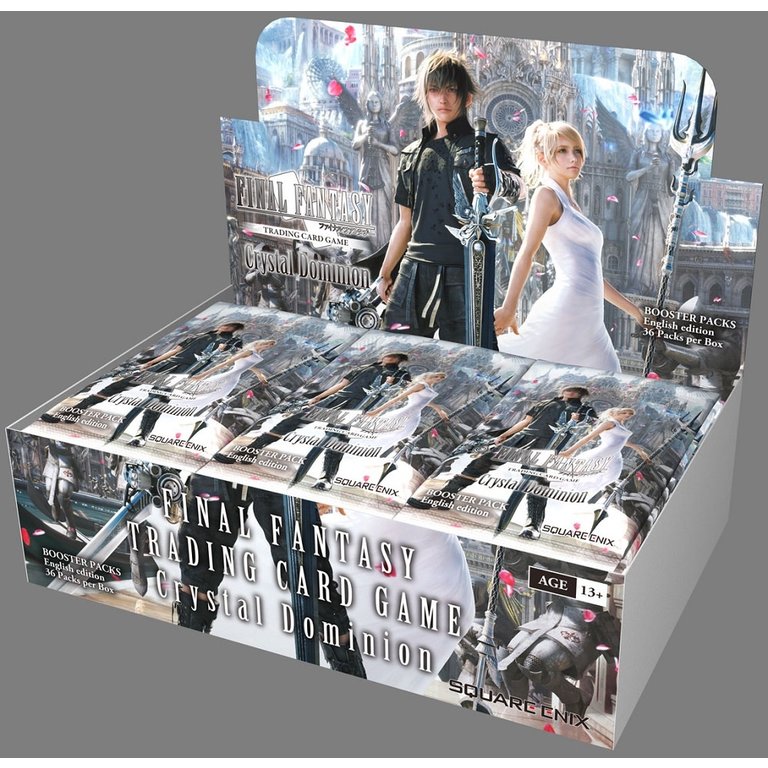 Carts submitted with multiple pre-orders, or with pre-orders and in stock items

together, will be cancelled and refunded.

Having gone through the Crystal trilogy of Opus XII, Opus XIII, and Opus XIV, FFTCG now gains a new power. A portion of the Character abilities, and Summons will now appear with a new cost to be paid called “Crystals”, not the usual “Crystal Points (CP).” Use abilities and more to gain “Crystals,” and experience the latest strategy. Dice or counters can be used to keep track of the number of Crystals, but Crystal Dominion includes two kinds of premium version Crystal cards that can be used during games.

Additionally, starting with this set, the product’s title will no longer include the “Opus” text and instead will include the subtitle only. Along with avoiding new players feeling intimidated by a high number, the prominent subtitle imparts an even stronger sense of the FINAL FANTASY atmosphere.

Legacy cards appear once again in this set, with particularly popular cards from past sets included as premium full art cards. In Crystal Dominion, the following three are included: Ace [9-003L], Yiazmat [9-057L], and Ashe [10-106L].

Quickview
Square Enix
Final Fantasy TCG - Boss Deck Chaos
Boss Fight is a multiplayer game format that is being introduced to FFTCG for the first time.
C$39.95
By using our website, you agree to the use of cookies. These cookies help us understand how customers arrive at and use our site and help us make improvements. Hide this message More on cookies »