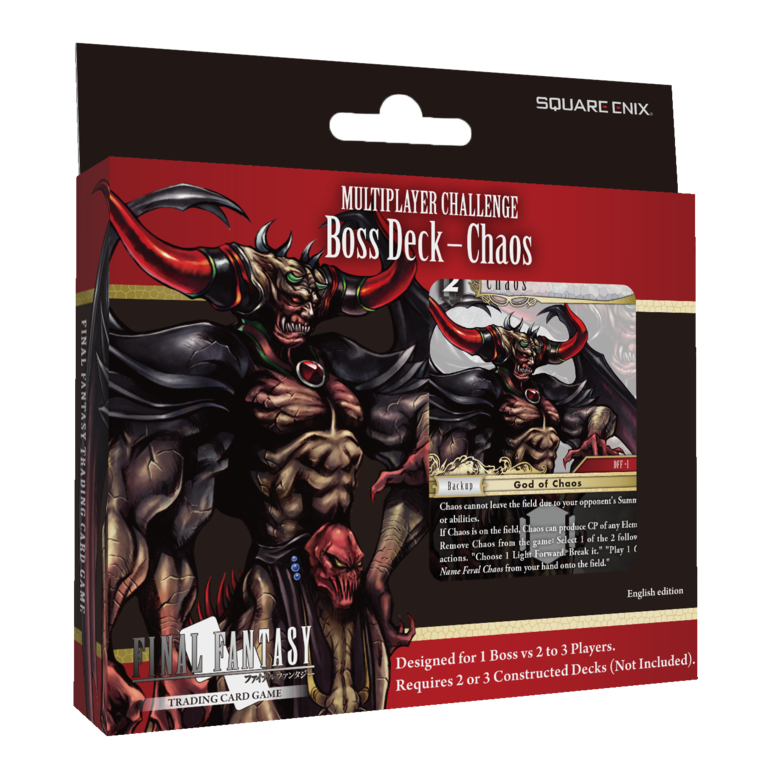 C$39.95
Square Enix
In stock
Article code 662248832173
Boss Fight is a multiplayer game format that is being introduced to FFTCG for the first time.
Share this product:

Boss Fight is a multiplayer game format that is being introduced to FFTCG for the first time. Played with 3 to 4 players, 2 or 3 players party up using their FFTCG constructed decks (not included) to discuss strategies and cooperate with each other to challenge the Boss player who holds a powerful “Boss Deck.”

“MULTIPLAYER CHALLENGE: Boss Deck - Chaos” is a pre-constructed 80-card deck to be played as the “boss deck” during a Boss Fight. There are many cards included in the deck, such as The Emperor, or Cloud of Darkness – boss characters who appeared throughout the FINAL FANTASY series – with powerful new abilities, to be used specifically for Boss Fights.

In addition to the pre-constructed deck, there are 17 cards that you can use to change the difficulty level, to make the boss deck stronger, and make for a more challenging fight. Players can adjust the difficulty based on their level; for example, beginners can use the pre-constructed deck as-is, and advanced players can use the cards to change to Hard mode, which allows for multiple repeated playthroughs with just one deck.

Boss Fight-specific cards have a different frame from those typically included in a booster pack and are unable to be used in standard Constructed format matches, but they are highly collectible.

out of stock
Quickview
Square Enix
Final Fantasy TCG: Final Fantasy Type-O Starter Set
C$19.95
By using our website, you agree to the use of cookies. These cookies help us understand how customers arrive at and use our site and help us make improvements. Hide this message More on cookies »