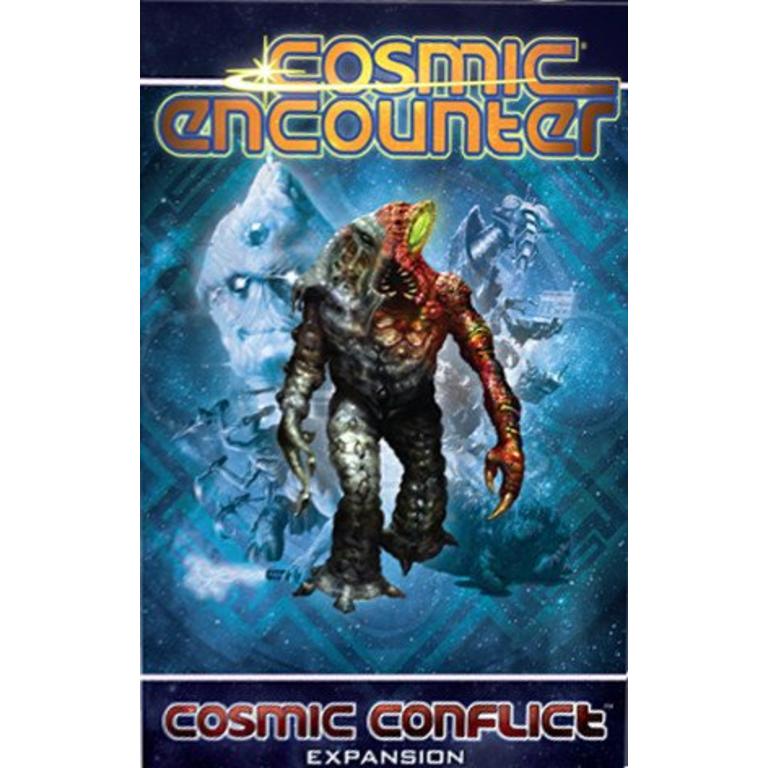 New and used copies may be available at

The galaxy was stretched out before you, and the vastness of space was yours to conquer. But other races sought to fill the cosmos with their colonies, and they used their strange and dangerous powers to aid them. Nevertheless, you ventured into the cold wastes to do battle. Now, turmoil has spread, and a new group of aliens hope to take advantage of it. How will these rulers attempt to seize power? Which will become your allies, and which your mortal foes? Who will survive this cosmic conflict? Only time will tell...

In Cosmic Conflict, the expansion for Cosmic Encounter, 20 new alien races explode onto the galaxy! Players will now shudder at the insidious kindness of the Empath, blink in confusion at the antics of the Lunatic, and howl in outrage as their planets are stolen away by the Claw!

Cosmic Conflict also makes the Cosmos even bigger, adding another player (and attractive black components) to the game. Cosmic Quakes will shake things up, ensuring that no player’s hand is truly safe. And as if that wasn’t enough, Cosmic Conflict introduces a new variant to the game – the hazard deck, which confronts the players with dangerous and amusing events that can crop up at any time!

Quickview
Fantasy Flight Games
Cosmic Encounter 42nd Anniversary Edition
Build a galactic empire...
C$78.95
By using our website, you agree to the use of cookies. These cookies help us understand how customers arrive at and use our site and help us make improvements. Hide this message More on cookies »