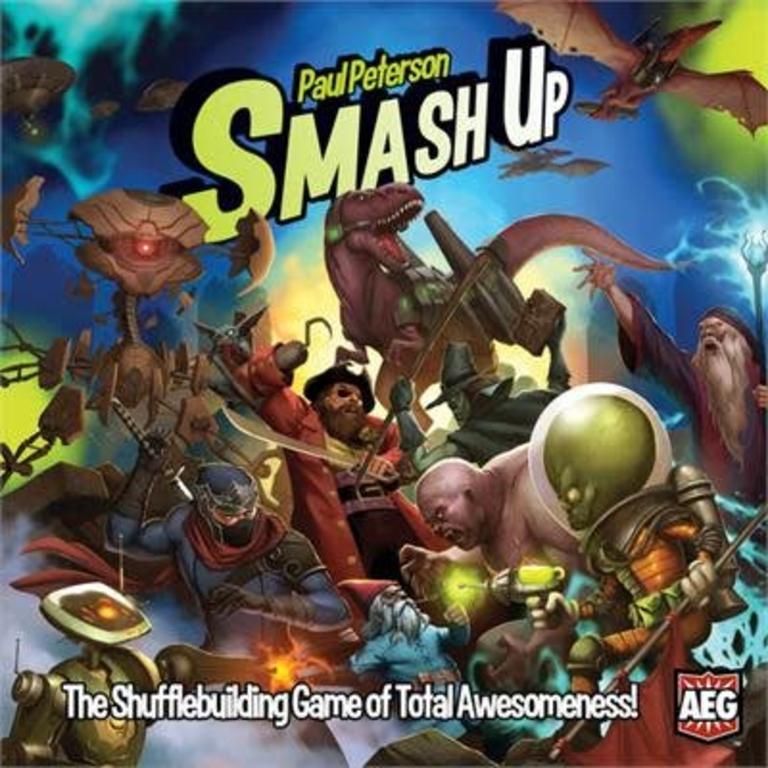 Smash Up, designed by Paul Peterson, is the Shufflebuilding game from Alderac Entertainment Group.  In Smash Up players draft two faction decks, such as pirates, ninja, robots, zombies, and more, and combine them into a force to be reckoned with!

When the game begins, players take turns drafting one of several faction decks.

Once each player has two decks, they shuffle them together, combining their distinct abilities into a unique 40-card deck.

A random selection of Base cards are dealt to the table, and players use their decks to attempt to have the most power on a base when it is scored.

It may sound simple, but how simple is it when the Zombie-Ninja deck Assassinates your minions then creates an Outbreak, loading the Base with minions from their discard pile?

Or when the Pirate-Dinosaurs Full Sail onto the base with the mighty King Rex, whose massive power dwarfs that of other minions?

Each combination gives a different experience, Pirate-Aliens play very different than Pirate-Zombies, and with 8 factions in the base set there are 64 combinations to try out and every expansion set increases the options exponentially!

Sleeves
If you require the 176 Standard sleeves needed for the cards in this game, we recommend: Two packs of Ultrapro Card Sleeves Standard Clear (66mmX91mm). This will provide the minimum number of sleeves needed to fully sleeve this game.

Smash Up: It's Your Fault! Expansion

Smash Up: Cease and Desist Expansion

Smash Up: What Were We Thinking? Expansion

Smash Up: Big In Japan Expansion

Smash Up: That 70's Expansion

C$28.12
In stock
Article code 729220055156
The Smash Up Bigger Geekier Box is the ultimate answer to storing Smash Up, which is of course the greatest need of our time.

Smash Up: Oops, You Did It Again Expansion

Quickview
AEG Alderac Entertainment Group
Smash Up: Oops, You Did It Again Expansion
Vikings, Egyptians, Samurai and Cowboys
C$17.25
By using our website, you agree to the use of cookies. These cookies help us understand how customers arrive at and use our site and help us make improvements. Hide this message More on cookies »