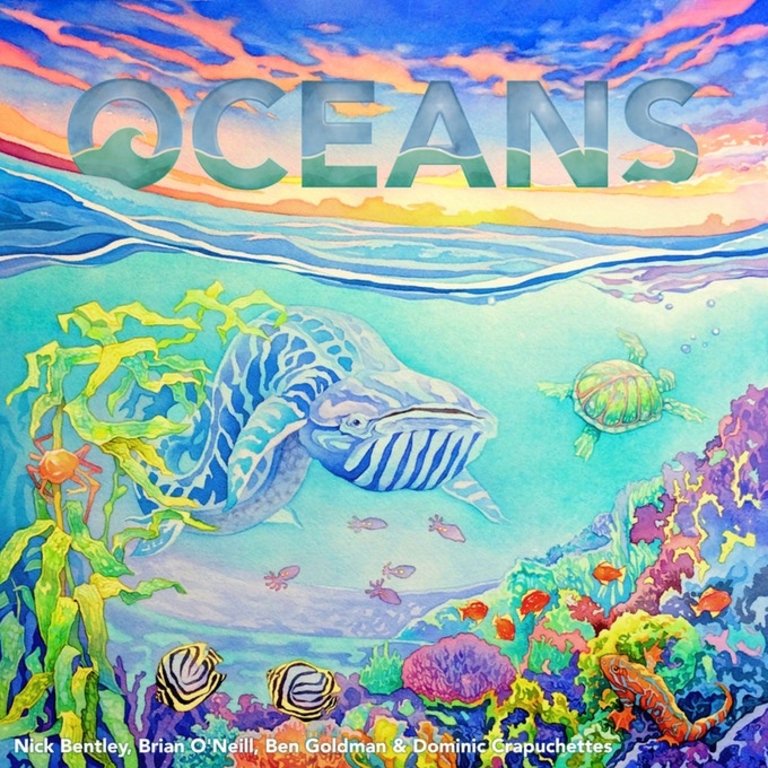 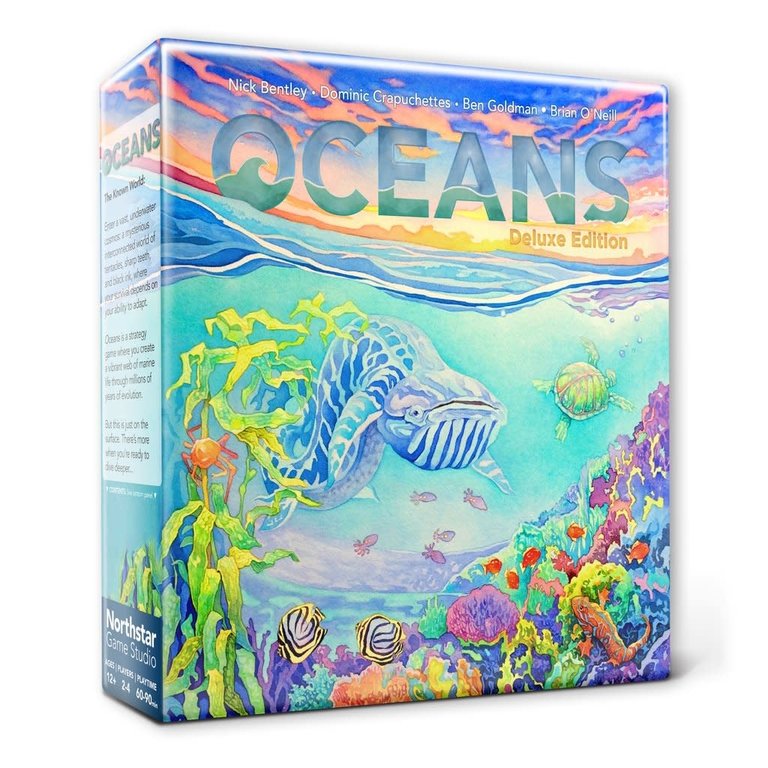 C$93.95
North Star Games
Out of stock
Article code 892884000029
Oceans is a 2-6 player strategy game in the Evolution game series where you create a vibrant web of marine life
Share this product:

Oceans is a 2-6 player strategy game in the Evolution game series where you create a vibrant web of marine life through millions of years of evolution.

The Evolution games are known for vivid themes, easy rules, and hidden depth. With many thousands of play-tests, years of non-stop design, over 100 unique illustrations, and more content than ever before, Oceans is North Star Games' most ambitious project to date.

At the game's start, the only food source is plankton, the foundation of the ocean food web. It populates the beautifully illustrated Reef and Ocean boards. Your goal is to create and evolve species so they find their niche in the growing ecosystem, by giving them helpful combinations of traits.

Each species is defined by its population, and its traits. Through the game it'll gain and lose traits, and gain and lose population depending on what it can eat, and what can eat it. Despite your best efforts, some species will go extinct! It's natural selection at work.

Because you can build species from any combination of traits, thousands of species are possible, and they all interact in their own particular ways as the ecosystem builds. Every game creates a one-of-a-kind world, never to be seen again.

Many species will be predators, each bigger than the next, all the way up to the dreaded apex predator. But some will eat in other ways, for example by scavenging on the sea bottom or filter-feeding on plankton.

Then there's a whole other side to the game. It's called The Deep.

Huge regions of deep ocean are unexplored, and what little we've seen of them can seem like fantasy. The Deep will contain, at minimum, 50 unique, powerful traits, which dramatically boost the range - and strangeness - of species you can evolve.

Each time you play, there are 2 scenario cards in play (chosen at random at the start of the game from a deck of at least 25). Each creates a major ecosystem-shift when activated, altering the whole game. It's another way the evolutionary timeline changes each play. The standard scenario deck can create about 600 distinct Ocean histories to evolve through.

Back to home
North Star Games

C$39.95
Out of stock
Article code 892884000814
Evolution: Flight, an expansion for Evolution, introduces avian species into the ecosystem.

C$55.95
In stock
Article code 892884000852
Evolution is an award-winning board game where 2 – 6 players adapt species in an ever changing ecosystem with hungry predators and limited resources.  Traits like Hard Shell and Horns will protect you from Carnivores, while a Long Neck will get food that

Quickview
North Star Games
Evolution Third Edition
Evolution is an award-winning board game where 2 – 6 players adapt species in an ever changing ecosystem with hungry predators and limited resources.  Traits like Hard Shell and Horns will protect you from Carnivores, while a Long Neck will get food that
C$55.95
North Star Games

out of stock
Quickview
North Star Games
Evolution - Climate: Playmat
C$16.27
By using our website, you agree to the use of cookies. These cookies help us understand how customers arrive at and use our site and help us make improvements. Hide this message More on cookies »