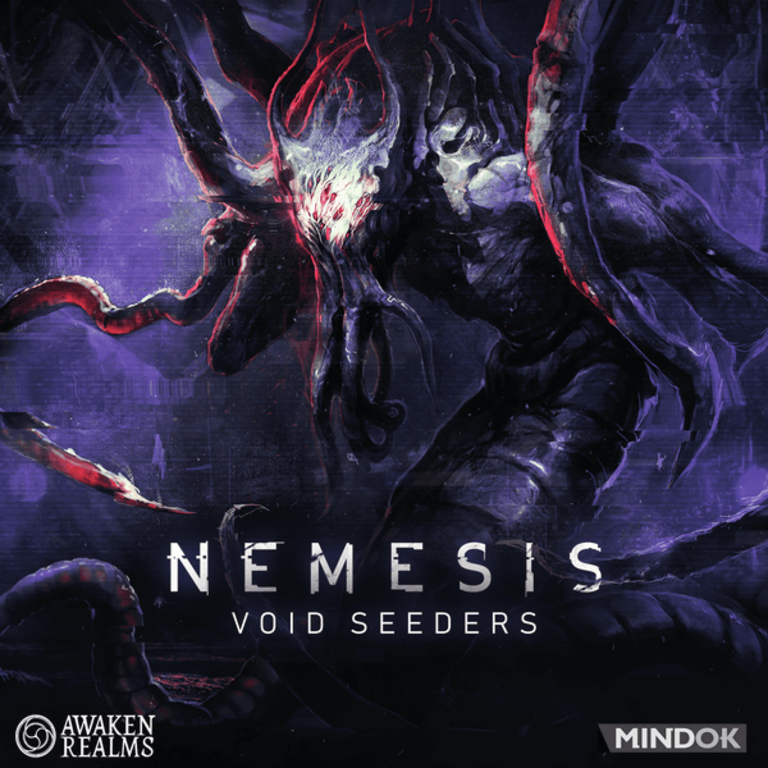 "Every spaceship has a voice; a melody of machinery and subsystems its crew learns intimately during long travels. The problem is, ever since the last mission our ship sounds WRONG. There’s something foul in the way it’s speaking to us. Barely audible murmurs. Strange whispers no machine could make. The dark corridors and vast halls almost seem to SING.

Some of us have tried to locate sources of these interferences, but they always seemed two steps ahead. Stalked by their never-ending presence, we soon started cracking. Our engineer has cut some words on his flesh. When we asked why he replied:‘Incandescent secrets need to be written in blood’. Then, our navigator took a spacewalk without her suit. When we pulled her in, her entire face frozen and cracked, she grinned in a way I will never forget.

Now, it got even worse. Noises turned into voices, sharing tales of slaughter and terror. They do not run from us anymore. They encircle us and herd us through the ship to some dark purpose. I need to UNDERSTAND them before it’s too late. I put my hand on the pistol grip, looking at the backs of my last two crewmembers. I see dark mysteries swirling under their skulls. It would only take two bullet holes to release them..."

Voidseeders are a race that can interact with the minds of crew members. They will have a few nests instead of one, but only one strong fighting presence at a given moment. Once killed, a new one will be awakened from the most developed nest.

This race will focus on whispering and controlling minds - people who will be near them will start to hear voices commanding them to do different destructive things.

On the board, there is normally 1 Nest as a room token, but there are additionally 2-3 smaller nests. Those are places where new Voidseeders will be born. At the moment of discovering the main Nest, you should put a Stalker miniature in it (this is the model that is on the ship from the beginning. He is very dangerous, especially when faced by people with a high Insanity level).

Other Nests will start showing up on the board together with discovering certain Exploration tokens. Those nests will be especially dangerous. They will not move, but if a crew member will happen to end the turn at the tile with a nest, he will get a serious wound.

They will spawn in nests, and their objective will be to spread insanity and try to move players to Nests.

They will work very similar to Voidlurkers, but with the difference that they will have the main goal of defending the main nest.

He is the main guardian. He takes advantage of the fear/insanity of the crew members and will focus on them.

The equivalent of the Queen. Actually, it is hard to say if she is real or if it is a mass hallucination. One way or the other, she will only emerge when all Insanity tokens are on players (number of tokens will be specific for different numbers of players). She is extremely strong.

Here it will change a little bit - players will normally get a contamination card every time they will get an insanity token. They will be easier to discard (you don't need to check if it was infected or not). Effect of the card will only take place at the very end of the game, and it will be the same as in the normal version - if it will turn out it was indeed "infected," it will mean that your character, even if escaped, went mad and lost the game either way.

This mechanism will change the noise mechanic. Whenever you move (or an event card will tell you to), you will need to roll for whispers. If you would get a corridor with a whisper token already in it (you hear something more) - you need to draw a Card from the Insanity deck. Those cards will apply to you or not based on the number of insanity tokens your character has. Effects might be very different - from one-time action to permanent disabilities.

In combat, Voidlurkers will only try to add insanity tokens to you and then run away to the closes nest. Whisperers will be harder to kill, as well as present some portion of actual physical danger, but their main weapon will still be giving you insanity tokens.

Things will change with Stalker and Despoiler - those two will be huge opponents who will give you real wounds, so you will not want to be near them.

But whenever you will be in a room with other people, this effect will be less harmful. (they can help you calm down)

Overall feel we will be going for will be way different from what you will have in the base Core Box. We have a lot of cool ideas on how to get Insanity cards in a way, that will be an additional layer of you not trusting your friends - not only because of their objective but perhaps because of the Insanity cards.

Additionally, interaction with Voidseeders will be way different, you will need to think very carefully about where to move or place your hero to not go insane.

Back to home
Awaken Realms

out of stock
Quickview
Awaken Realms
Nemesis: Terrain Miniatures Expansion
C$45.97
By using our website, you agree to the use of cookies. These cookies help us understand how customers arrive at and use our site and help us make improvements. Hide this message More on cookies »