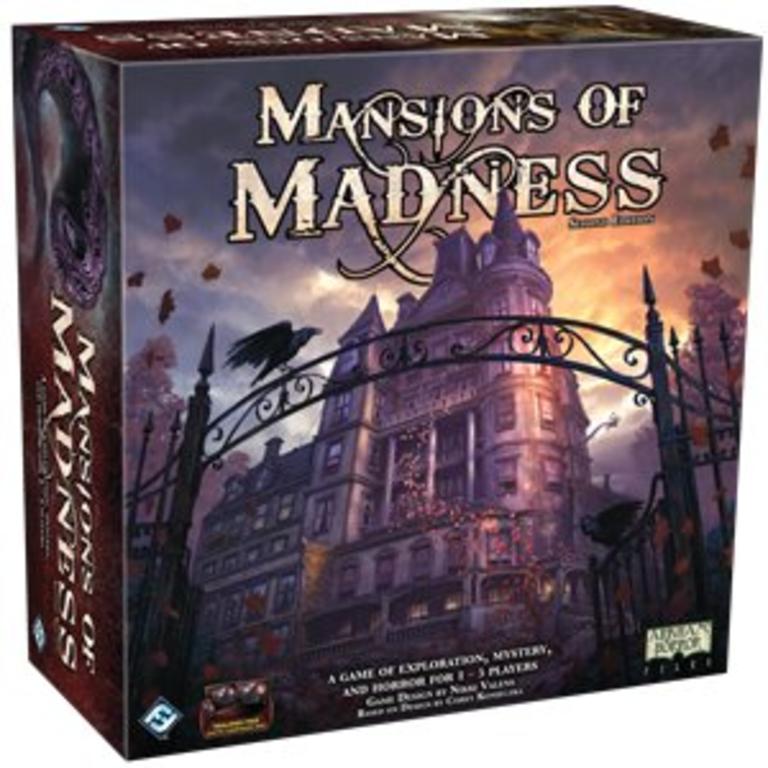 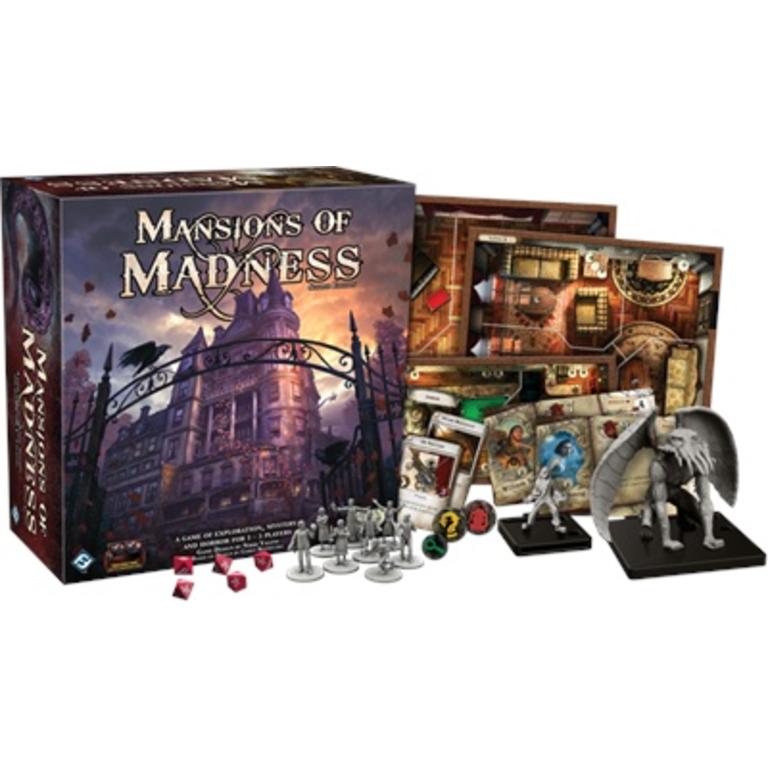 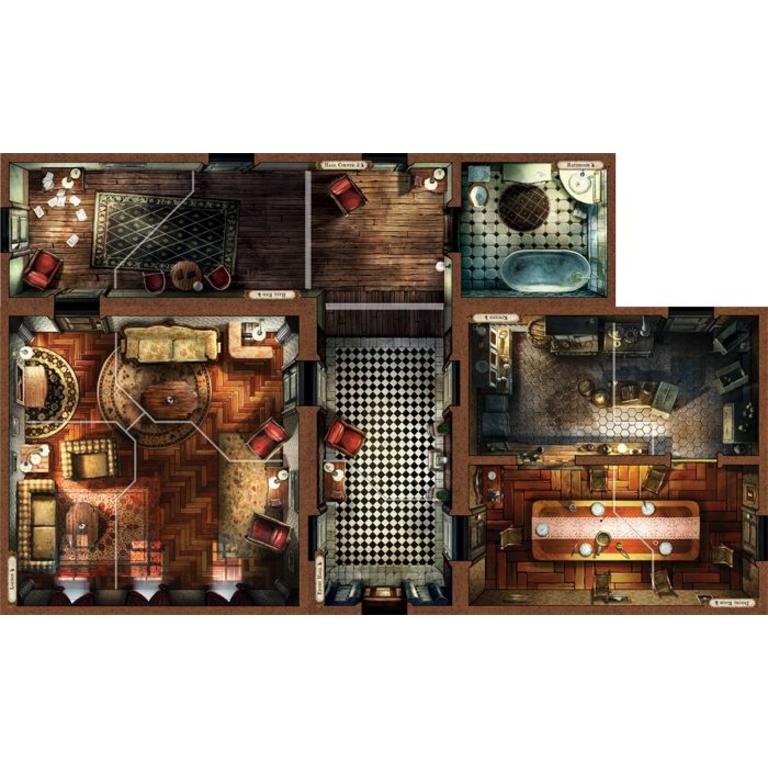 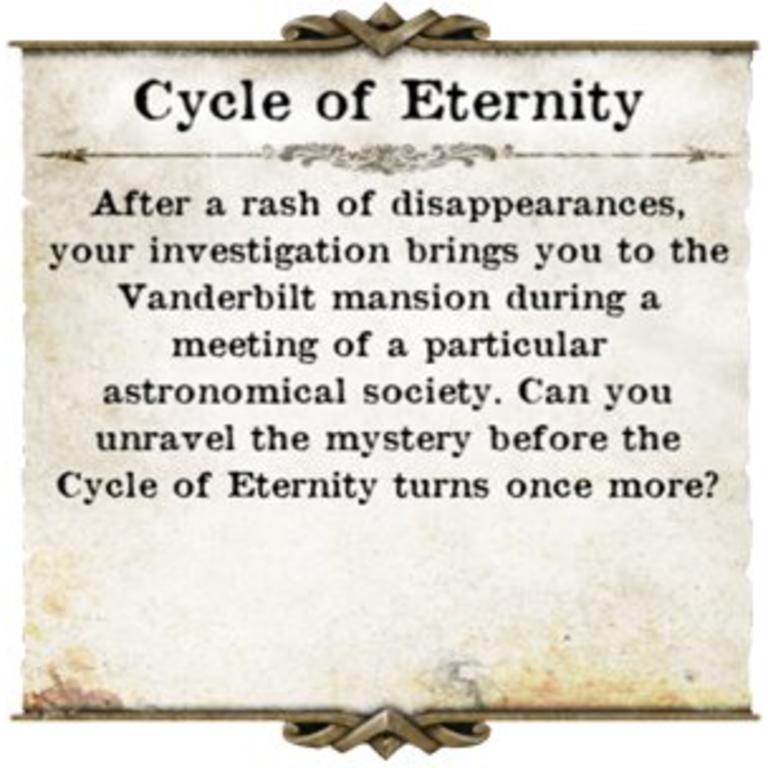 C$139.95
Fantasy Flight Games
In stock
Article code 841333101213
The secrets and scares that await you in Mansions of Madness Second Edition loom ever closer, and all that stands between you and the answers you seek are four days, countless monsters, and your own stability of mind. Can you keep your head?
Share this product:

As you huddle in the corner, knowing you cannot escape the paranoia infiltrating your mind, the monsters in your mind seem to creep ever-closer. Fangs drip with anticipation, tentacles coolly slide toward you from the shadows. Shivers shoot up your spine and the hairs on your neck stand upright. This is not the mansion you entered before... And yet, there is a strange sense of familiarity here. Perhaps you have dreamed the soft chanting that seems so unbelievably real now. It is possible, you think, that you have glimpsed those glowing eyes through the crack of the door once before. Though now, when you look again, they do not disappear. When you shake your head to expel the seemingly impossible, your misgivings do not fade. In fact, they grow even stronger than before...

The haunting happenings of Mansions of Madness Second Edition are rapidly approaching, just four days from their sinister arrival. With twenty-four double-sided map tiles, thirty-two plastic mini figures, and hundreds of cards and tokens, the possibilities of the game are vast. Using just the core set, your every play of the apps scenarios will vary, with unpredictable mythos events, monster encounters, and a variety of scenario-specific maps.

In your game box, however, you will also find a conversion kit, allowing Mansions fans to bring their existing, much-loved first edition components into their new second edition game. Used in combination with your first edition investigator figures, monster minis, and map tiles, the kit's investigator cards, monster tokens, and person tokens will deepen and expand your Mansions of Madness Second Edition game.

Each of the components in the conversion kit are marked with one of three symbols, each representing the game from which they originated. Mansions of Madness First Edition components are all marked with a key, Forbidden Alchemy expansion pieces have a conical flask on them, and a crescent moon symbolizes elements from the Call of the Wild expansion. If you do not have all three products, you can use these symbols to quickly and easily determine which pieces will complete your collection.

Between the base game and its two expansions, sixteen investigators were introduced to the Mansions of Madness game world. The conversion kit includes new, updated cards for each of these characters, creating a larger pool of investigators with which to play. Between these and Second Edition, there are twenty-four different investigators, each with unique skills, health, and sanity. From Harvey Walters, the frail but sharp professor, all the way to Michael McGlen, the brawny and single-minded gangster, you can take on the role of many varied characters in your investigations of Arkham.

In addition to their character statistics, the investigators also have special abilities. Many of these abilities are inspired by those from the first edition, for example, "Ashcan" Pete still begins the game with his loyal hound dog, Duke, and Vincent Lee is exceedingly talented at healing. When you begin the game, a number of items will be allocated to assist you on your quest. Some of these will be investigator-specific, but you will want to rely on your investigators' individual strengths and weaknesses in order to decide the distribution of the others. Kate Winthrop might benefit from bandages, due to her lower level of health. On the other hand, a character with more physical strength, such as Joe Diamond, would wield a close-combat weapon well.

The Frightening Monsters The Mansions of Madness Second Edition conversion kit includes thirty-three new tiles in order to incorporate these figures, representing seventeen monsters from the first edition and its two expansions, except the six cultists. Everywhere that you might encounter monsters, you may encounter any of a number of the horrors in the mansion. You may be haunted by new beasts, such as Hunting Horrors, Ghosts, or Star Spawn, or it could be Cult Leaders, Crawling Ones, or Dark Druids, long-forgotten nightmares returning for a second opportunity to drive you mad.

The monster figures in Mansions of Madness Second Edition are set on the same bases as the Arkham Horror Premium Figures and those featured in the first edition of Mansions of Madness. These bases allow you to slide information tokens underneath them, so you have quick and easy access to the monsters' traits and abilities. Because of the consistency between editions, you can seamlessly incorporate your first edition and painted minis into your new game, expanding the possibilities of your game and further immersing you in the bone-chilling happenings that have befallen Arkham's residents.

The Secrets in These Walls

In the Mansions of Madness Second Edition companion app, you will have the option to incorporate some or all of your old components. Whether you have the first edition and its expansions or just one of the products, you can still incorporate it into your game. Each product you add to your collection will allow you to play as that game's investigators, introduce the possibility for those monsters to spawn, include a few new people to encounter, and widen the pool of maps the app could generate for your chosen scenario. If you decide to play without certain expansions or add more to your collection, you can always go back and change your collection within the app, thereby altering the possible combinations of monsters, maps, and investigators.

The secrets and scares that await you in Mansions of Madness Second Edition loom ever closer, and all that stands between you and the answers you seek are four days, countless monsters, and your own stability of mind. Can you keep your head?

We dare you to try.

C$61.95
In stock
Article code DNR-5902643190771
e-Raptor Insert compatible with Mansions of Madness is a perfect accessory designed to organize and improve gameplay of the board game.

C$45.95
In stock
Article code 3800500972541
Insert compatible with Mansions of Madness 2nd Edition®, and Beyond the Threshold®, Streets of Arkham®, Sanctum of Twilight®, and Horrific Journeys® expansions.

C$79.95
In stock
Article code 841333106898
In the skies above the Atlantic, a dirigible’s peaceful journey is interrupted by a bloody act of revenge and an oncoming storm. On the sea far below, a treacherous saboteur plants the explosives that will sink a ship. In the New England countryside, a tr

Quickview
Fantasy Flight Games
Mansions of Madness 2nd Edition: Horrific Journeys Expansion
In the skies above the Atlantic, a dirigible’s peaceful journey is interrupted by a bloody act of revenge and an oncoming storm. On the sea far below, a treacherous saboteur plants the explosives that will sink a ship. In the New England countryside, a tr
C$79.95
Fantasy Flight Games

C$41.95
In stock
Article code 841333105235
It is a mistake to fancy that horror is associated inextricably with darkness, silence, and solitude. H.P. Lovecraft, Cool Air

Mansions of Madness 2nd Edition: Beyond the Threshold Expansion

Quickview
Fantasy Flight Games
Mansions of Madness 2nd Edition: Beyond the Threshold Expansion
C$42.95
By using our website, you agree to the use of cookies. These cookies help us understand how customers arrive at and use our site and help us make improvements. Hide this message More on cookies »