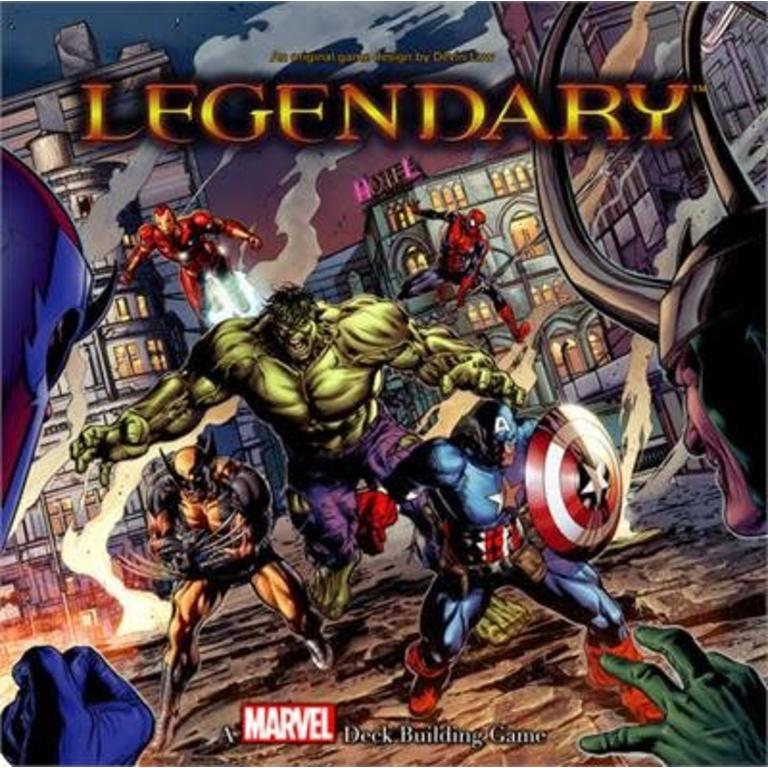 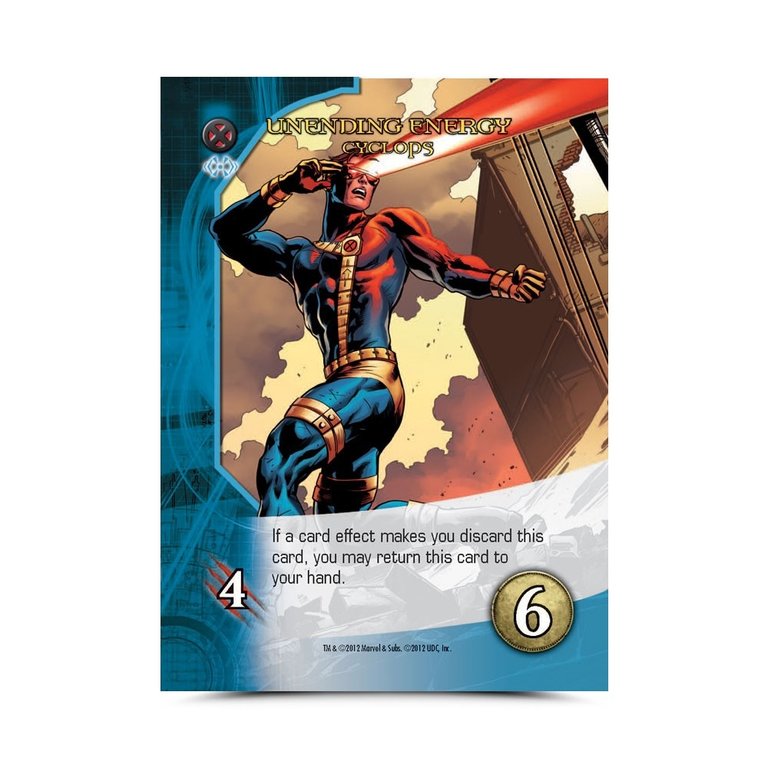 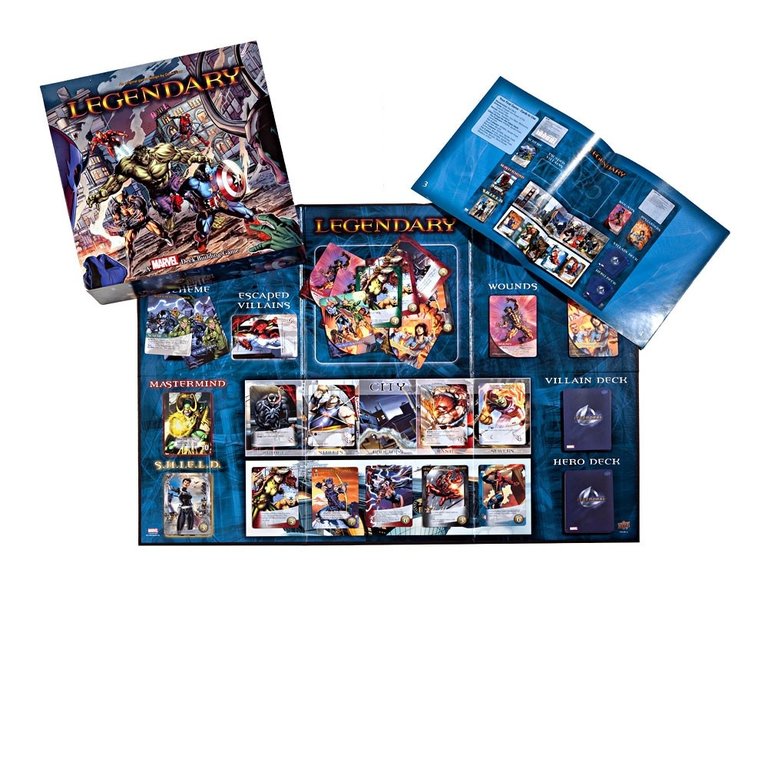 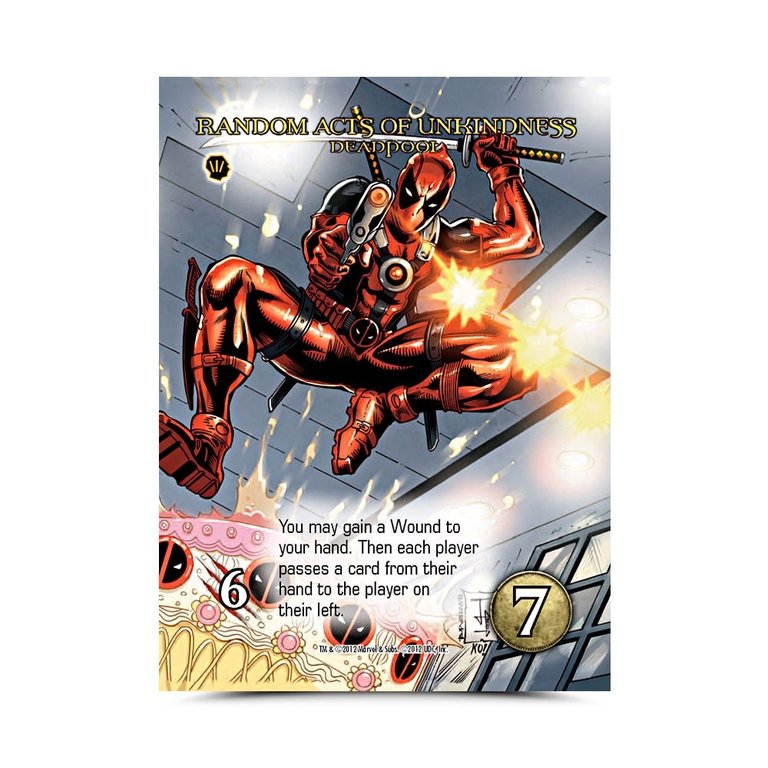 C$78.95
Upper Deck
In stock
Article code 053334803663
Do you have what it takes to defeat the villains? Or, will you let them escape? Play the all new Legendary: A Marvel Deck Building game to find what the cards have in store for you.
Share this product:

Legendary® is a deck-building game set in the Marvel Comics universe. To set up the game, players choose a number of hero decks from the likes of Spider-man, Hulk, Cyclops, or Wolverine, to name a few. Shuffle them together (since players use only a handful of hero decks out of the fifteen included) allowing the hero deck to vary widely in terms of what's available. Players then choose a mastermind villain (Magneto, Loki, Dr. Doom, etc.) and stack that particular villain's attack cards underneath it. Next, modify the villain deck as needed based on that villain's particular scheme. Over the course of the game, players will recruit powerful hero cards to add to their deck in order to build a stronger and more resourceful deck. Players need to build both their recruitment powers (to enlist more heroes) and their fighting ability (to combat the villains who keep popping up to cause trouble). Players recruit heroes from an array of six cards, with empty slots refilled as needed.

At the start of a player's turn, he reveals a villain and adds it to the row of villains. This row has a limited number of spaces, and if it fills up, the earliest villain to arrive escapes, possibly punishing the heroes in some way. Some villains also take an action when showing up for the first time, such as kidnapping an innocent bystander. The villain deck also contains "master strike" cards, and whenever one of these shows up, the mastermind villain (controlled by the game) takes a bonus action. As players fight and defeat villains, they collect those cards, which will be worth points at game's end. Players can also fight the mastermind; if a player has enough fighting power, he claims one of the attack cards beneath the mastermind, which has a particular effect on the game. If all of these cards are claimed, the game ends and players tally their points to see who wins. If the mastermind completes his scheme, however – having a certain number of villains escape, for example, or imposing a certain number of wounds on the heroes – then the players all lose.

Do you have what it takes to defeat the villains? Or, will you let them escape? Play the all new Legendary: A Marvel Deck Building game to find what the cards have in store for you.

Sleeves
If you require the 500 Standard sleeves needed for the cards in this game, we recommend: Five packs of Ultrapro Card Sleeves Standard Clear (66mmX91mm). This will provide the minimum number of sleeves needed to fully sleeve this game.

Back to home
Upper Deck

C$26.95
In stock
Article code 053334907521
The long wait for the fan-favorite Ant-Man is finally over as the size-changing scientist has arrived in his self-titled Legendary expansion!

Quickview
Upper Deck
Legendary - Marvel: Ant-Man Expansion
The long wait for the fan-favorite Ant-Man is finally over as the size-changing scientist has arrived in his self-titled Legendary expansion!
C$26.95
By using our website, you agree to the use of cookies. These cookies help us understand how customers arrive at and use our site and help us make improvements. Hide this message More on cookies »