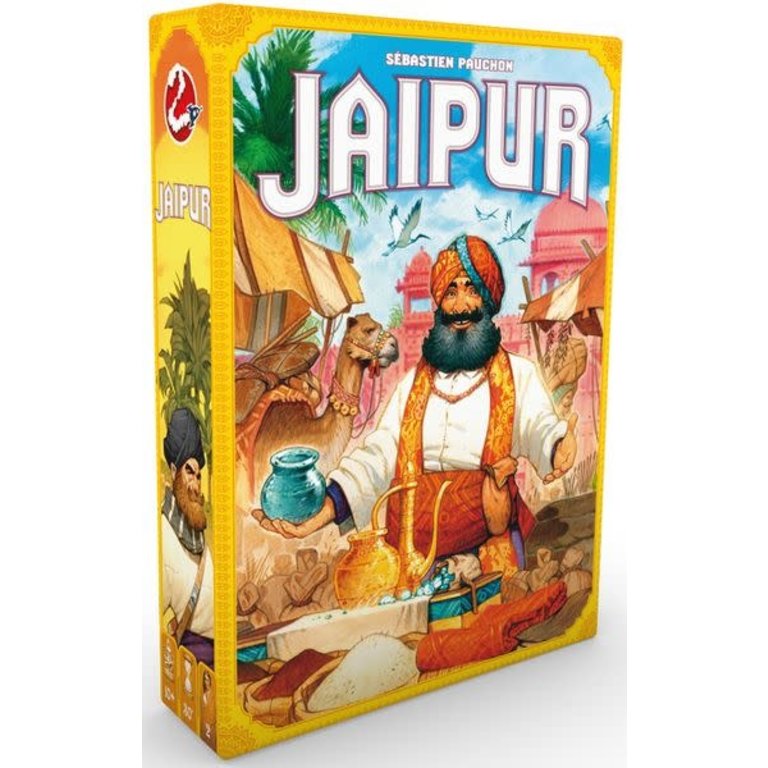 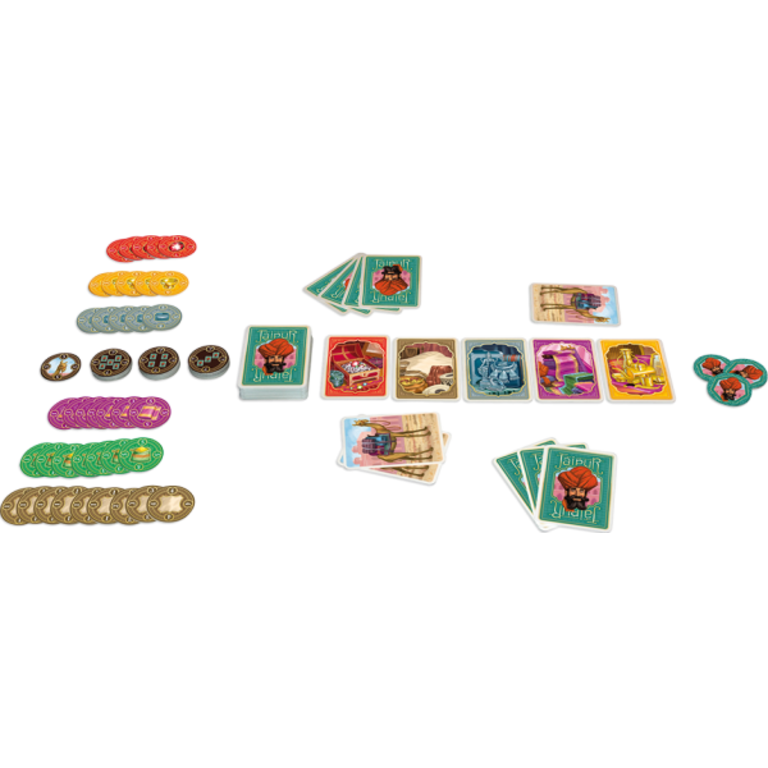 The Maharajah of Rajasthan has decided to build a new capital city called Jaipur, a place of opulence, wealth, and wondrous opportunity—especially for a trader such as yourself. You know the trade routes of this desert region, and you have access to the highest quality spices and silks. In Jaipur, you have a chance not only to become richer than ever before, but to become the personal trader of the Maharajah himself.

Jaipur is a quick, intense, two-player card game that invites you and an opponent compete for the Maharajah’s favor. Each turn, you must choose whether to acquire goods and camels or sell your stock for as many rupees as you can, but you cannot do both. At the end of a round, the wealthiest trader earns the Maharajah’s seal of excellence. The game lasts until one player earns two seals of excellence and wins!

BUY CAREFULLY
You’ll start the game with a hand of five cards which will likely be a mix of goods and camels. There will also be a market of five cards with at least three camels available for purchase. A good trader must balance buying goods with investing in the means to convey them.

When you’re buying, you must choose between taking one good, taking all the camels, or exchanging your own goods and camels for the same number of goods from the market. If you’ve got a strong hand already, you may want to take the single good that you can sell for the most profit. Yet camels are useful for two reasons: if you have more camels than your opponent at the end of the round, you earn five rupees. Camels can also be exchanged for goods from the market that may be worth more than the camels themselves. Of course, the most profitable purchase depends on what’s in your hand and how far into the game you are. Always be careful how and what you choose to buy from the market.

SELL STRATEGICALLY
In Jaipur, you can sell only one kind of good at a time, but you can sell as much of it as you want. Selling three or more cards at once earns you a bonus. So, for example, if you manage to sell four bolts of cloth in one turn, you’ll take four cloth tokens, each worth at least one rupee, and a bonus token worth four, five, or six rupees. If you only sell one or two bolts, you would only receive the two cloth tokens. The most lucrative goods—silver, gold, and diamonds—must be sold two, three, or more at a time. It’s hard to find a buyer who can afford such items, and such buyers always want more than just one diamond or piece of silver.

The sooner you start selling goods in Jaipur, the more you make in the sale. Once the city is flooded with spices or cloth, they cease to be as valuable as they once were. Tokens are stacked with the highest value on top, so that whoever sells something first earns more rupees for the amount sold than the next player. You can’t simply buy goods for the first half of the round and then sell them off near the end—not only is it an unprofitable strategy, but it’s prevented by the seven-card hand limit.

AIM FOR EXCELLENCE
A round ends when there are either no goods left to buy in the market or the tokens for three different goods are gone. The player with the most camels receives the camel token, worth five rupees, and then you count up your earnings. Whoever has the most rupees earns that round’s seal of excellence. Then, either the market refreshes and another round begins, or if one player has two seals, the game ends with that player’s victory!

Learning how to play Jaipur takes no time at all, but becoming a trader worthy of the seal of excellence is not easy. You must be able to read the market, learning the right time to acquire goods and the right time to sell them. You must make difficult choices in every turn and weigh your opponent’s options against your own. Whether you’re a seasoned expert at trading or just starting your business, Jaipur offers you a challenging, exciting market in every game.

Sleeves
If you require the 55 standard sleeves needed for the cards in this game, we recommend: One pack of Ultrapro Card Sleeves Standard Clear (66mmX91mm). This will provide the minimum number of sleeves needed to fully sleeve this game.