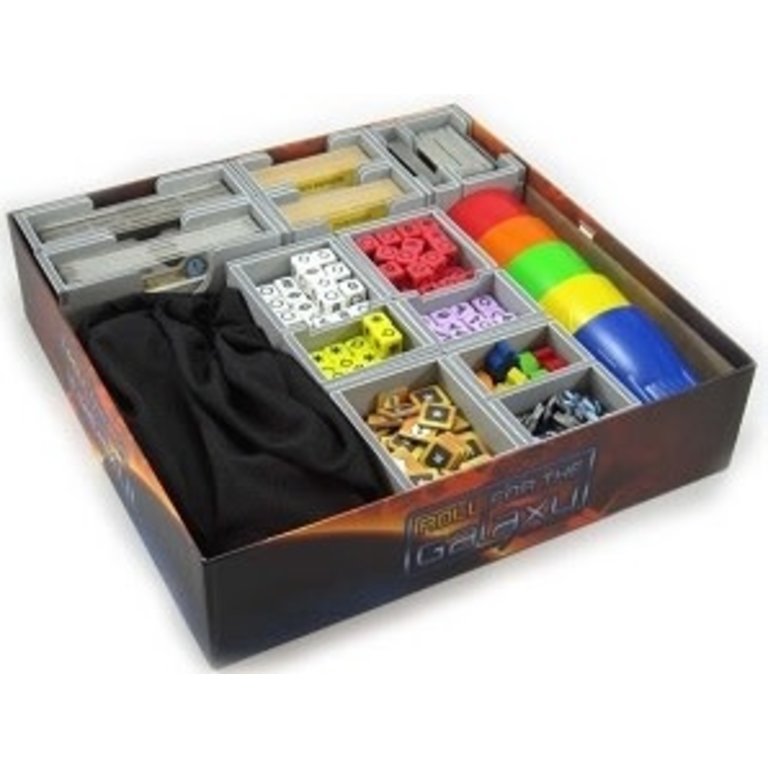 Insert for Roll for the Galaxy

C$11.77
Folded Space
Out of stock
Article code 3800500972336
Insert compatible with Roll for the Galaxy®, and the Ambition® expansion.
Share this product:

Insert compatible with Roll for the Galaxy®, and the Ambition® expansion. The design provides both efficient storage and improved game play. Many of the trays can be utilised during the game, and they greatly aid set-up and clear-away times. The rules act as a lid on top of the trays.

With the top layer removed you can see underneath the remaining dice and token trays.  At the top of the image you can see trays for the vertical storage of the game tiles with separate spaces for the faction, home world, objectives and other tiles. in the middle are the first of the dice and token trays. On either side of these are spaces for the game tile bag and player dice cups.

The dice trays are made with a lip in the bottom left of each tray slot so that the dice never lie fully flat. This makes extracting the dice very easy, no matter the number of each kind of dice in the tray.

The game tiles with separate spaces for the faction, home world, objectives and other tiles, are all stored vertically in purpose designed trays. These all have holes cut into the sides to make access easy during setup and game play.

The vertical game tile trays are stacked at the top of the box and are higher than the remaining trays. This leaves a space for the rules and player boards to fit into so that they do not move around when the game is transported. The rules act as a lid on the remaining trays holding the components inside.

All the trays can be removed form the box and used during setup and game play. This greatly speeds up the time needed to get the game to the table as well as the time it takes to clear away.

Roll for the Galaxy

Roll for the Galaxy: Ambition Expansion

Quickview
Rio Grande Games
Roll for the Galaxy: Ambition Expansion
C$31.77
By using our website, you agree to the use of cookies. These cookies help us understand how customers arrive at and use our site and help us make improvements. Hide this message More on cookies »