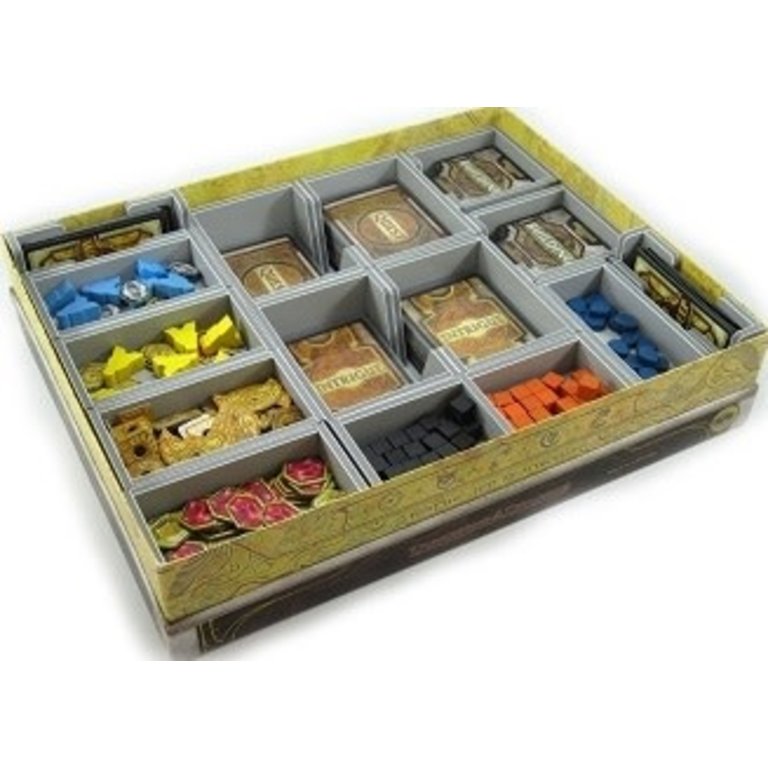 Insert compatible with Lords of Waterdeep®, and Scoundrels of Skullport® expansion. The design provides both efficient storage and improved game play. Many of the trays can be utilised during the game, and they greatly aid set-up and clear-away times. The rules and boards act as a lid on top of the trays.

The trays allow for storage of each card type separately, as well as the building tiles. There are separate trays for each player, so they can take their colour pieces and use in-game. The adventurer cubes also all have separate slots to ease access.

The card trays are removable and can be used during game play. There is space for all cards from the original game and the expansion to be sleeved in quality sleeves. The building trays have slots in the side to ease access, and can also be used during the game to keep the tiles tidy.

The trays are all made to be used during game play. They can be removed from the box and placed directly on or around the game board. The game boards and rule books all fit neatly in the recess left on top of the two tray layers. With the box lid on flush with the bottom, the game can be easily transported and stored vertically without a problem.

"Waterdeeples" Meeples for Lords of Waterdeep (100)

C$34.95
Out of stock
Article code 605546841119
Looking for Meeples for Lords of Waterdeep that are uniquely designed in house at The Broken Token?  Like your tokens made of wood with rich colors?

out of stock
Quickview
Broken Token
"Waterdeeples" Meeples for Lords of Waterdeep (100)
Looking for Meeples for Lords of Waterdeep that are uniquely designed in house at The Broken Token?  Like your tokens made of wood with rich colors?
C$34.95
By using our website, you agree to the use of cookies. These cookies help us understand how customers arrive at and use our site and help us make improvements. Hide this message More on cookies »