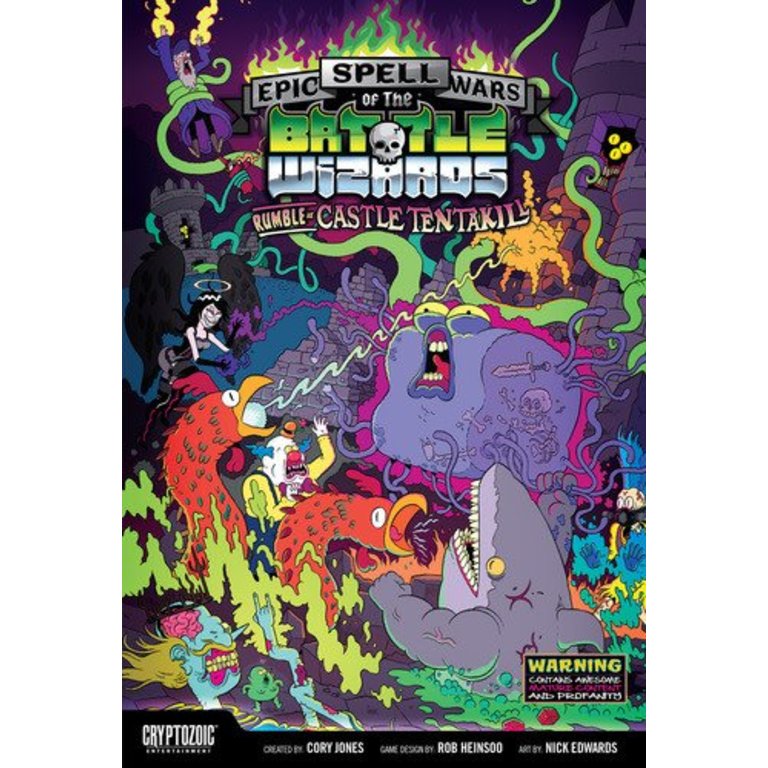 The sleeper hit has awakened! Epic Spell Wars II: Rumble at Castle Tentakill is finally here and it’s loaded with all-new ways to deliver a smoking death to all who oppose you. This stand-alone game is also 100% compatible with the original game, which allows players to turn an already epic game into an EP​IC game. Epic Spell Wars continues its epic quest after airing on TableTop on Geek and Sundry! Featuring game design and all-new art from the original creative team of Cory Jones, Rob Heinsoo, and Nick Edwards.

New Addition: Creatures! Delivery cards in this set can also become your pets if you roll well enough. With a familiar by your side for a few rounds, you’ll be unstoppable. But if a big splash of damage is heading your way, why not have your little buddy jump in the way and take that blast instead of you?

New Addition: Blood! Collect Blood as you slay your opponents and tempt fate with powerful magiks and treasures. Use your Blood points to make some spells even more powerful than before.

New Addition: Reactions! A few spells will partially resolve even if you die too soon. Now you can play a full-strength spell without fretting about dying before it resolves. With a Reaction in there, you’ll get your revenge…

New Addition: The Standee matters! That crazy stand-up piece is now a coveted heirloom in the game. If you control it, several of your spells will increase in strength. It can also earn you some extra Blood.

Whether you have played the original or not, this new set will provide everything you need to start blasting your opponents into tiny bits of goo. Experienced players will find new challenges and they’ll marvel at the all-new Treasures and Dead Wizard cards as well. Mix the two sets together for the ultimate carnage-fest!

Back to home
Cryptozoic

Epic Spell Wars of the Battle Wizards IV: Panic at the Pleasure Palace

out of stock
Quickview
Cryptozoic
Epic Spell Wars of the Battle Wizards: Duel at Mt. Skullzfyre
Did you know that magical wizards are battling to the death ... and beyond ... right now!?
C$29.95
By using our website, you agree to the use of cookies. These cookies help us understand how customers arrive at and use our site and help us make improvements. Hide this message More on cookies »