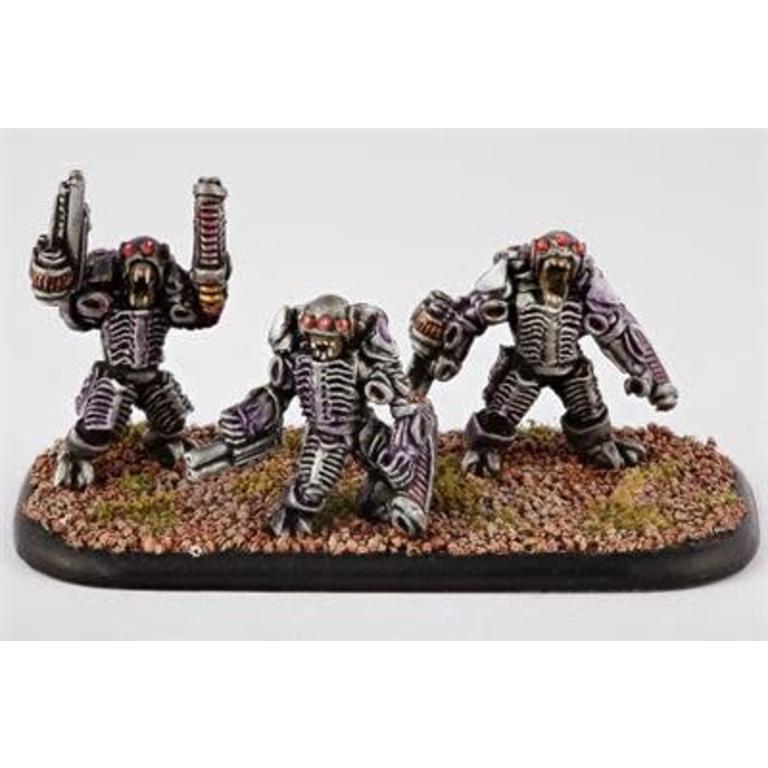 C$18.95
Dropzone Commander
In stock
Article code 639713388046
Share this product:
Destroyers are the only remnants of a brutal and savage alien race, long since conquered by the Scourge. In much the same manner as the Razorworms, they are now bred specifically as hosts due to their prodigious power and intimidating stature. In battle, they use this strength to lug a pair of heavy weapons and to batter unfortunate enemies to a pulp! Destroyers serve the dual role of mixed fire support and room clearance, where they can clear and hold buildings with immovable and bestial force.

Each destroyer carries a Shard Cannon, a fearsome anti-infantry weapon equivalent to a UCM heavy machinegun. Due to its heavy calibre and sheer weight of fire, the Shard Cannon can even be effective against light vehicles. As a broadly conventional firearm, the Shard Cannon is able to mow down enemy troops at a far greater range than standard issue plasma rifles. Destroyers are also armed with a miniaturised version of the Plasma Cannon, the Plasma Charger. While it is only charged for a single shot, the effect of a volley from these weapons is often devastating!

Destroyers have been known to literally blast their way through solid walls with brute force akin to a wrecking ball. They are usually unfazed by enemy opposition and can be expected to enter a building with guns blazing, seconds before crashing through the wall!

Full background and rules can be found in Reconquest: Phase 1