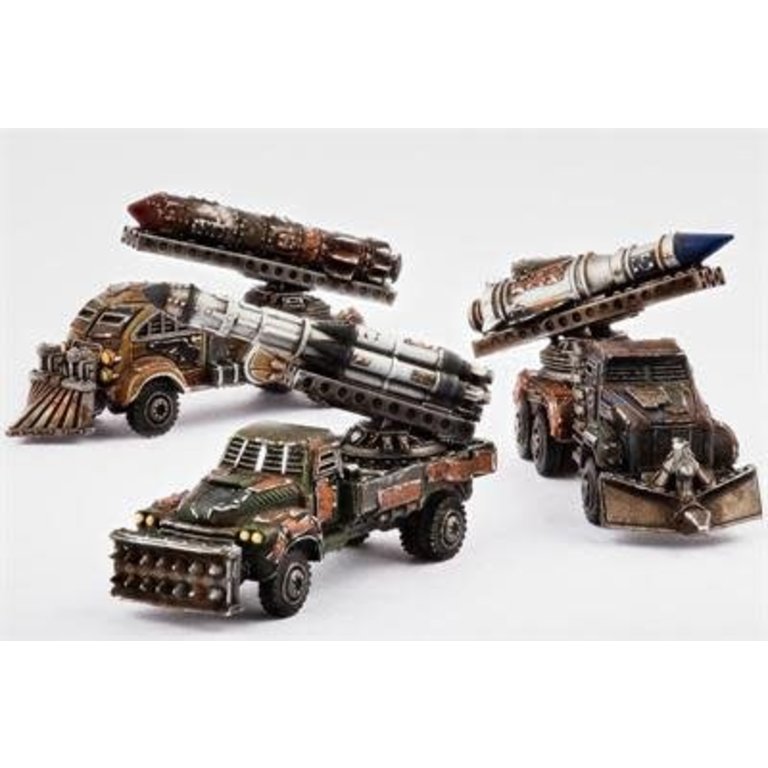 C$24.95
Dropzone Commander
In stock
Article code 740781772122
Share this product:
The storm wagon is known colloquially as Devils Guitar, Deathscreamer, Howler and Boomer, amongst other names. This is the most varied in design of all wagons, taking the concept of improvised munitions to its fullest extent. In essence, the storm wagon straps a massive quantity of unguided rockets (from different sources) to a traversable mount on the rear of the vehicle.

These are unleashed in a rapid fire, barely controlled salvo of screaming destruction, usually in an arcing trajectory allowing the base vehicle to operate safely from cover. Although their munitions are slow, they can overwhelm countermeasures by sheer quantity, increasing their effective range when multiple units fire as a battery.

The Resistance have always proven themselves nothing if not inventive. If a problem presents itself, they will adapt, avoid, adjustor smash it to pieces. The Thunder Wagon is a clear example of the Smash it to Pieces problem solving strategy. They take position behind the front line, co-ordinate with forward scouts and then deploy their Golgotha Missiles one at a time, causing untold havoc to the enemy.

The missiles themselves are un-subtle weapons of destruction, tipped with heavy armour plating and packed with explosives. Even the most effective countermeasures are little proof against the weight of a Golgotha Missile, which spreads death and destruction over a wide area even if detonated before impact.

Needless to say the effect on structures is equally awe inspiring and horrific, ripping huge chunks of masonry, superstructure and support out of even the largest building, and often reducing smaller buildings to little more than rubble with one hit.

Contents:
Storm Wagon shares blister Thunder Wagon
Three Models per blister
Length: 45mm (varies)
10mm Scale
Models supplied unassembled and unpainted
By using our website, you agree to the use of cookies. These cookies help us understand how customers arrive at and use our site and help us make improvements. Hide this message More on cookies »