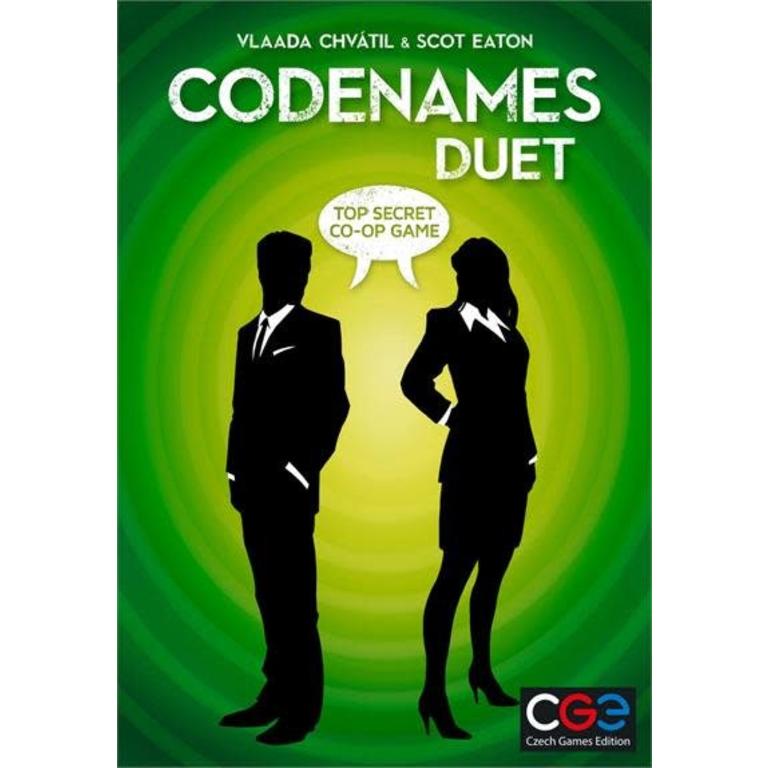 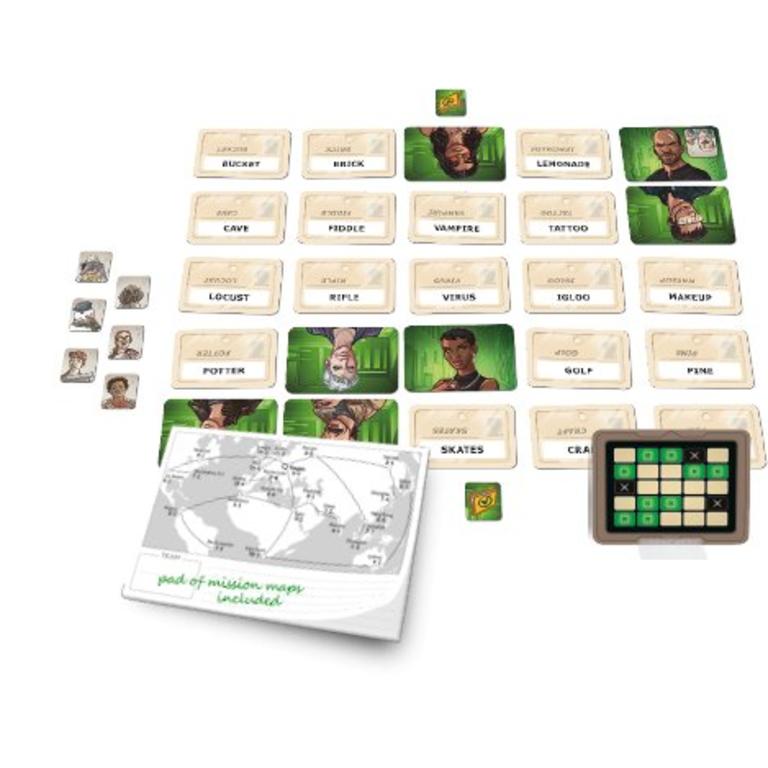 C$24.95
Czech Games Edition
In stock
Article code 8594156310400
Codenames Duet keeps the basic elements of Codenames, but now you're working together as a team to find all of your agents.
Share this product:

Codenames Duet keeps the basic elements of Codenames — give one-word clues to try to get someone to identify your agents among those on the table — but now you're working together as a team to find all of your agents. (Why you don't already know who your agents are is a question that Congressional investigators will get on your back about later!)

Collectively, you need to reveal all fifteen agents — without revealing an assassin — before time runs out in order to win the game. Either player can decide to give the first one-word clue to the other player, along with a number. Whoever receives the clue places a finger on a card to identify that agent. If correct, they can attempt to identify another one. If they identify a bystander, then their guessing time ends. If they identify an assassin, you both lose! Unlike regular Codenames, they can keep guessing as long as they keep identifying an agent each time; this is useful for going back to previous clues and finding ones they missed earlier. After the first clue is given, players alternate giving clues.

Contents
15 green agent cards for cooperative play
100 Duet key cards, double-sided so you and your partner can give each other clues
11 timer tokens to keep the pressure on
1 assassin card (Oh no!)
1 pad of mission maps
1 card stand
Rulebook
200 cards with 400 new words compatible with the original Codenames

Back to home
The OP

C$27.95
In stock
Article code 700304049018
The Disney Family Edition of Codenames combines the hit social word game with some of Disneys most beloved properties from the past 90 years.

Quickview
The OP
Codenames: Disney
The Disney Family Edition of Codenames combines the hit social word game with some of Disneys most beloved properties from the past 90 years.
C$27.95
Czech Games Edition

C$27.95
In stock
Article code 700304049179
The Marvel Edition of Codenames combines the hit social word game with the Marvel Universe including Spider Man, Guardians of the Galaxy, and The Avengers.

C$24.95
In stock
Article code 8594156310318
The two rival spymasters know the secret identities of 25 agents. Their teammates know the agents only by their CODENAMES.

C$24.95
In stock
Article code 8594156310363
Codenames: Pictures differs from the original Codenames in that the agents are no longer represented by a single word, but by an abstract image.

C$3.95
In stock
Article code 4251715402832
The well-known and established Sleeve Colour Codes by Fantasy Flight Games™ are continued in this product line.

out of stock
Quickview
Czech Games Edition
Codenames Pictures XXL
Codenames Pictures, now with larger pictures! No more magnifying glass needed!
C$42.95
By using our website, you agree to the use of cookies. These cookies help us understand how customers arrive at and use our site and help us make improvements. Hide this message More on cookies »