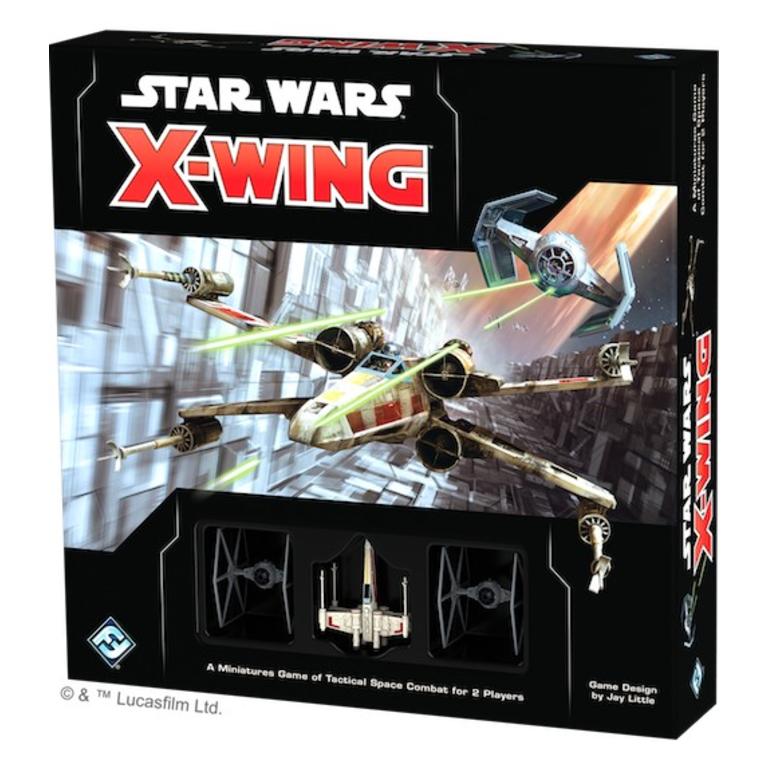 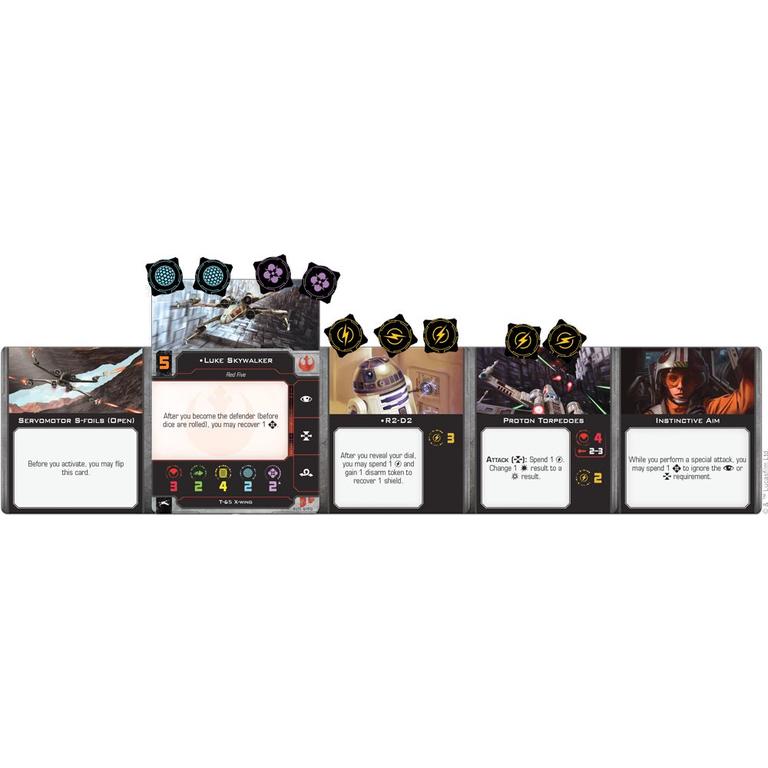 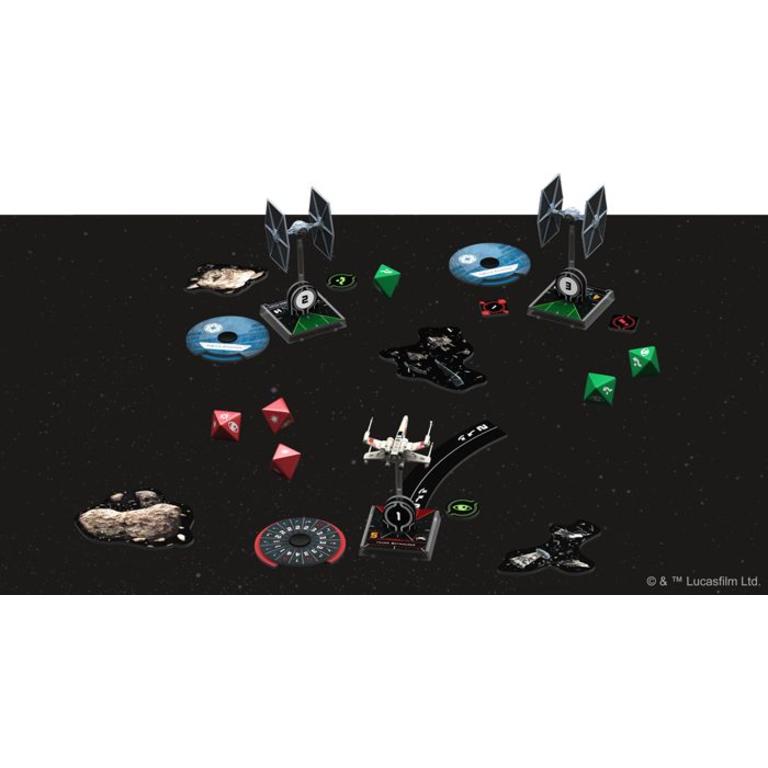 C$42.49
Fantasy Flight Games
In stock
Article code 841333105587
Now is your chance to pilot some of the most advanced starfighters in the galaxy. Assemble your squadron and recreate thrilling Star Wars space battles with X-Wing Second Edition!
Share this product:

Enter the next era of interstellar combat in the Star Wars galaxy! In X-Wing Second Edition, you assemble a squadron of iconic starfighters from across the Star Wars saga and engage in fast-paced, high-stakes space combat with iconic pilots such as Luke Skywalker and Darth Vader.

With refined gameplay that focuses on the physical act of flying starships, X-Wing Second Edition lets you create your own Star Wars space battles right on your tabletop. Intuitive mechanics create the tense atmosphere of a firefight while beautifully pre-painted miniatures draw you deeper into the action. Man your ships and enter the fray!

X-Wing Second Edition locks two players in fierce ship-to-ship combat. Each round, you’ll carefully plot a course for each of your ships, trying to anticipate enemy movement. If you can successfully outmaneuver your opponent, you’ll catch the enemy ships in your sights and open fire. One player wins when all enemy ships are destroyed!As the commander of your squadron, you begin each round by deciding how your pilots will fly their ships. As in the first edition, every ship in X-Wing Second Edition flies differently with a completely unique maneuver dial. Using these unique maneuver dials, you’ll secretly select each ship’s maneuver at the top of the round. Once a maneuver has been locked in for every ship, it’s time to start flying.  Any squadron is composed of pilots of varying skills, from rookies encountering their first action to hardened veterans used to the din of battle. Because of this, each pilot will react to their surroundings differently. On every ship card, you’ll find an initiative value that represents that pilot’s reflexes, skill, and even luck. This initiative value determines when your ships will act. During the round, the lowest skilled pilots are forced to move first, as they attempt to get into position to open fire.This straightforward system provides a wealth of tactical depth, allowing you to make gentle turns or aggressive loops while trying to stay one step ahead. Taking the foundational system from the game’s first edition, moving your ships in X-Wing Second Edition is quick and easy. Each maneuver that you select on your ship’s maneuver dial has a speed and a heading that determines the maneuver template you’ll use. To move, you simply move your ship along the maneuver template, as shown below!Every maneuver that you make affects your pilots and determines how they can be used later on. Pull off a daring red maneuver and you might get the drop on an enemy ship, but you’ll also have to take a stress token, limiting your options in future rounds. Execute an easy blue maneuver, however, and you can remove a stress token.Carefully plotting your movements is critical to success in X-Wing Second Edition. If you can anticipate your opponent’s movements, you may catch them off guard and set up the perfect shot, while keeping your own ships out of harm’s way.

A coordinated attack is essential to catching the enemy in your sights, but fancy flying will only take you so far. To win, you must make full use of your ships’ systems and capabilities. Like in first edition, every X-Wing Second Edition ship has a unique set of actions it can take. Unless the pilot is stressed, each ship can perform an action after it moves. Your pilots may focus and clear their minds of distractions, take evasive action, acquire a deadly target lock on an enemy ship, barrel roll to adjust their position, or activate additional thrusters to boost themselves forward.Effectively combining actions and maneuvers can help ensure your plans come to fruition, but this also means knowing when to take risks. In addition to red maneuvers, certain red actions in X-Wing Second Edition can cause pilots to become stressed. Whether you receive stress from a red maneuver or a red action, stressed pilots cannot perform any actions or execute red maneuvers. With so few options available to stressed ships, you must decide when to be aggressive and when to play it safe.In addition to regular actions, some pilots in X-Wing Second Edition can influence the Force to help them in the heat of battle. These pilots can spend Force charges throughout a battle to heighten their senses and hone their perception, allowing them to perform some otherworldly feats.Force-sensitive pilots have a Force capacity printed on their ship cards that determines the number of Force charges they receive at the beginning of the game. At the very least, a Force charge can be spent to change a single focus result to a hit or an evade. Force charges can be much more powerful than that, however, and several upgrade cards unlock even more potential in Force-sensitive pilots.

Maneuvering your ships and performing actions are all designed with one goal in mind: getting into position to fire at your opponent’s ships. To target another ship, it must be within your ship’s firing arc and in range. When you’re activating and moving ships, your pilots with the lowest initiative must move first, but when it’s time to fire, the order reverses and pilots with the highest initiative attack first!At the bottom of every ship card, you’ll find numbers representing a ship’s attack, agility, hull, and shields. When you make an attack, you gather red attack dice equal to your ship’s attack and roll them. After you’ve rolled your attack dice, your opponent will roll green defense dice equal to their ship’s agility.For example, a TIE fighter’s attack is two, so it would roll two red dice in an attack against an X-wing. As the X-wing has an agility of two, it would roll two green defense dice. Each evade symbol cancels a single hit or critical hit, but shots that connect cause damage.At first, damage whittles away a ship’s shields, but once all of a ship’s shields have been removed, it is dealt damage cards instead. For regular damage, the damage cards are dealt facedown. If a ship sustains critical damage, however, the damage card is dealt faceup, potentially causing all sorts of difficulties. Critical damage could cause a pilot to panic and gain stress. Or, one of your engines could be damaged, increasing the difficulty of your turn maneuvers. No matter what happens, a ship is destroyed when it has damage cards equal to its hull.

Before you start flying your ships, X-Wing Second Edition invites you to assemble your own squadron from some of the most iconic starfighters and pilots in the Star Wars galaxy. The first step is to choose a faction, and from there, you have two options. You can jump right into the action with Quick Build cards that list pre-built ship and upgrade combinations. Or, if you want full control over your squadron, you can use the X-Wing squad builder app to build your squadron on your computer or mobile device, allowing you to quickly create a custom squad.
The X-Wing squad-builder tracks the point values of ships and upgrades, letting you build your own X-Wing Second Edition squadron on your computer or mobile device. It also creates a dynamic environment for Organized Play or casual games!Once you’ve selected your faction in the X-Wing squad builder, you’ll be able to start adding ships and upgrades. In addition to choosing unique pilots such as Luke Skywalker and Darth Vader for your squadron, every ship can be outfitted with upgrade cards to enhance its capabilities. Whether you load proton torpedoes onto your Y-wing, upgrade an X-wing with an astromech droid, or outfit a TIE fighter with afterburners, every upgrade helps you create a squadron that fits your playstyle.The ships and upgrades that you choose are worth a certain number of points in your squadron, and the squad builder app explains all the rules of squad-building, enforces those rules so that you do not accidentally build illegal squads. Rather than printing point values on the ship and upgrade cards themselves, the X-Wing squad builder app governs the point costs of all ship cards and upgrade cards, and it also determines what upgrade slots are available to a given ship.Not only does the X-Wing squad builder app enable fast and accurate list-building, the versatility of the X-Wing squad builder app means that it will be easy to support multiple types of games, creating a more dynamic play environment. Whether you’re playing at an official tournament or around your table at home, the X-Wing squad builder can be used to create specific experiences that test all of your squad-building abilities. For example, the Organized Play team could easily adjust the point costs or upgrade slots available to certain ships for the course of a single event, a series of tournaments, or a season of the game.Certain ships, ship cards, and upgrade cards may rotate in and out of tournament legality, giving the Organized Play team an opportunity to create unforgettable and unique tournament experiences. You can even use the X-Wing squad builder app to create your own custom game types if you’re playing at home or running your own tournament in a local store! By restricting certain cards or ships, you can create a tournament that’s as unique as the game experience you want to explore.

Now is your chance to pilot some of the most advanced starfighters in the galaxy. Assemble your squadron and recreate thrilling Star Wars space battles with X-Wing Second Edition!
Watch a Review
2 player gamesspace gamesstar wars

C$21.24
In stock
Article code 841333106065
Few sounds can strike fear into the heart of a starfighter pilot like the howl of an incoming group of Imperial TIE/ln fighters.

C$11.04
In stock
Article code 841333105686
Now, you can further customize the aesthetics of your squadron by situating each ship’s maneuver dial within a stylish and secure plastic housing.

C$11.04
In stock
Article code 841333105679
Commanding a fighter squadron is an honor only bestowed on the best Imperial commanders and a distinction that shouldn’t go unnoticed.

C$42.49
In stock
Article code 841333105617
With the Lando's Millennium Falcon Expansion Pack, you can relive these exploits while adding this iconic ship to your Scum and Villainy squadron.

Quickview
Fantasy Flight Games
Star Wars - X-Wing 2.0: Lando's Millennium Falcon
With the Lando's Millennium Falcon Expansion Pack, you can relive these exploits while adding this iconic ship to your Scum and Villainy squadron.
C$42.49
By using our website, you agree to the use of cookies. These cookies help us understand how customers arrive at and use our site and help us make improvements. Hide this message More on cookies »