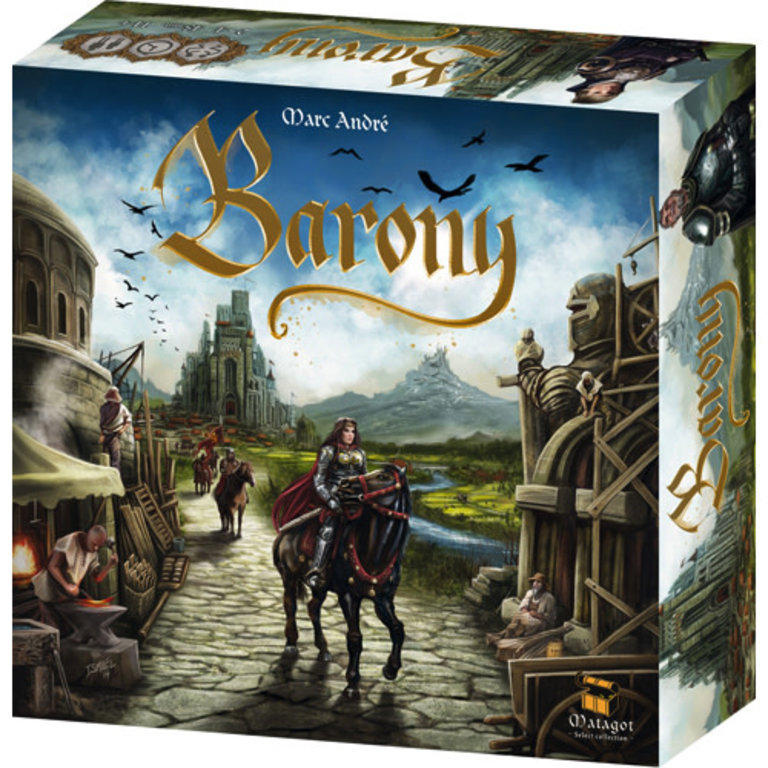 C$59.95
Matagot
Out of stock
Article code 3760146642072
In Barony, players are ambitious barons trying to extend their dominion over the land! Who will succeed and become the new king?
Share this product:

On the outskirts of the Empire, the tension is tangible: the internecine struggles for the power conquest take more and more important proportions. As a baron, you rule one of the fourth most influent families of the region. With your army of knights, you have to reach the most rich and fertile lands, colonize them and above all, defend them against your opponents! You have also to climb the stairs of power in order to, one day maybe, become the new king!

At the beginning of the game, players create the board at random with nine tiles per player; each tile comprises three hexagons, with each hexagon being one of five landscape types: forest, plains, field, mountain, lake. Players then each place three cities on the game board, with a knight in each city. They then take turns in clockwise order, with each player taking exactly one action from the six possible actions:

Once any player has gained the title of duke, finish the round, then tally the VPs, with players scoring for resources still in their possession, their rank in the game, and the number of cities they built. Whoever has the most VPs wins.

Back to home
Lookout Games

Quickview
Space Cowboys
Caylus 1303
A Classic Game is Back!
C$74.95
By using our website, you agree to the use of cookies. These cookies help us understand how customers arrive at and use our site and help us make improvements. Hide this message More on cookies »