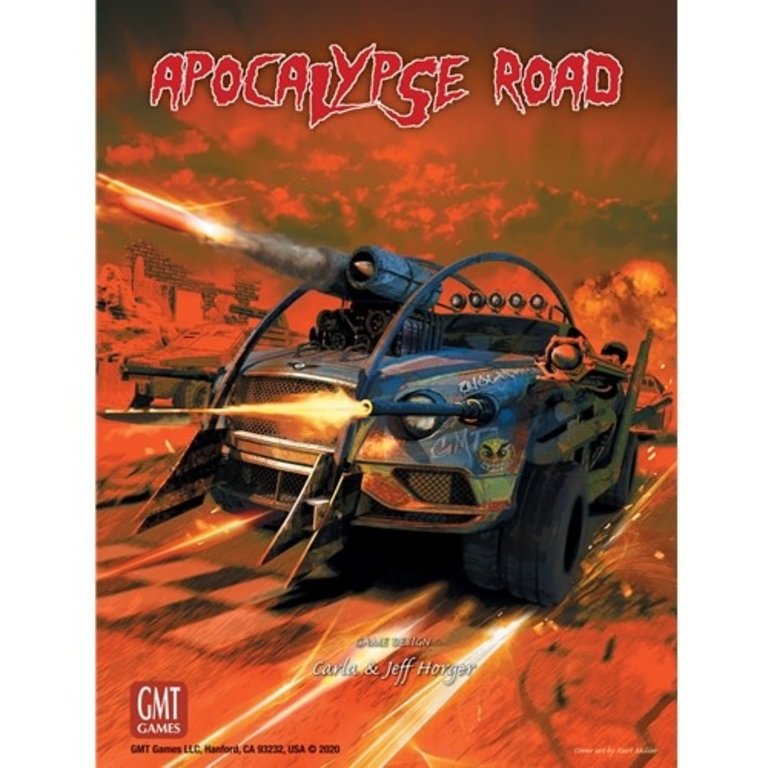 In the bleak future, after the collapse of our modern technological world, most of the structures we hold dearly today are no longer effective. The things that brought us comfort and ease have fallen into disrepair and disuse. Central governments have given way to localized strongmen. In some places the world is nothing but a vast wasteland and in other locals mankind thrives by calling back to its pre-modern lifestyle.

Through it all men still choose to compete and challenge each other in the various arenas. Auto racing is one of these sports that will not die. But the rules no longer apply. The racing circuits are no longer about speed and guile. Now they resemble high speed demolition derbies. The most famous organized racing competition of them all, the Apocalypse Road, is run by callous thugs and monsters who encourage drivers to arm their cars and literally destroy their opponents. It is the Roman Coliseum reincarnated.

Over time, new rules and organizational structures have taken hold. Ten teams now complete across the Thunderverse in a season-long show of firepower and twisted metal. Drivers work as part of a team struggling to complete laps under machine gun and even missile fire. The tracks, falling into decades of disrepair, are a jumbled mess of jumps, joker lanes and dirt. Much like the gladiators of old, in a time of intense anguish, the chance to be a hero, even for a day, calls drivers out to risk life and limb for wealth and food. The arena beckons, will you take the wheel?

Apocalypse Road is a race game using the Thunder Alley/Grand Prix engine. Players attempt to score points by crossing the finish line (somewhat like roller derby) and by eliminating opposing cars. The first team to 15 points wins the event and gets a double portion of foodstuffs as a reward.

In Apocalypse Road, a race is played to the accumulation of 15 skins for a team. A Skin may be scored in two ways.

•  Each time a car crosses the Finish Line is worth 1 Skin.

• Each opposing car that is eliminated during your activation is worth 1 Skin.

• There is no leading and there is no tracking of lapped cars.

Each team consists of 5 cars and 3 alternates. Each time a car is eliminated it is removed from play. On the next turn players that have lost cars may replace cars with alternates out of “The Chute.”

In Apocalypse Road players must choose between three strategies. Do you:

• Employ the race strategy and go for the finish line.

• Race and shoot opportunistically trying to maximize both aspects.

Although you can play Apocalypse Road on those shiny tracks from Thunder Alley and Grand Prix, the game really shines on the four included tracks. Highlights from the tracks:

• Figure 8 (you do not want to end an activation in the intersection!)

• Diagonal Lead Movement: All the diagonal movement you can handle.

• Ram Movement: Movement into the back of another car stops movement but allows you to attack that car.

• Lead Ram Movement: Bring other cars along with you as you ram the opposition.

There is no specific events phase in Apocalypse Road. Instead players control their risk and rewards. When a player attempts to damage another car, a Combat Results card is drawn to resolve that combat. If a player uses one of the most effective Race Cards, they require a draw from the Movement Event deck. These events could be good or bad and are often situational, depending on the car’s position on the track and the type of terrain it is passing through.

Cars no longer are completely dependent on the draw of the card to determine speed. Of course it is a factor, but each car is rated for weight with the lighter, less-armed cars having higher base speeds while the heavier armored vehicles have a low base speed. Base speeds are modified by the cards played to give cars their total speed for the activation.

Cars in Apocalypse Road are all equipped with some degree of weapons, armor and electronics. These include: Machine Guns, Missile Launchers, Auto-Cannons, EMP Guns, Armor, Turrets, Mounts and Targeting Computers. There may some secret technologies not listed here that may make it into the final game. Each race/battle has a combination of these items to bring a unique profile to each play of the game. The weapons each have their own profile for types of damage and amount of destruction they inflict.

Damage is not a hindrance in Apocalypse Road. You are either functional or you are not, so having 2 damage is no less debilitating than 5 damage on a car. Taking 6 damage renders a car into a pile of twisted, smoking metal. Anything less and you are good to go.