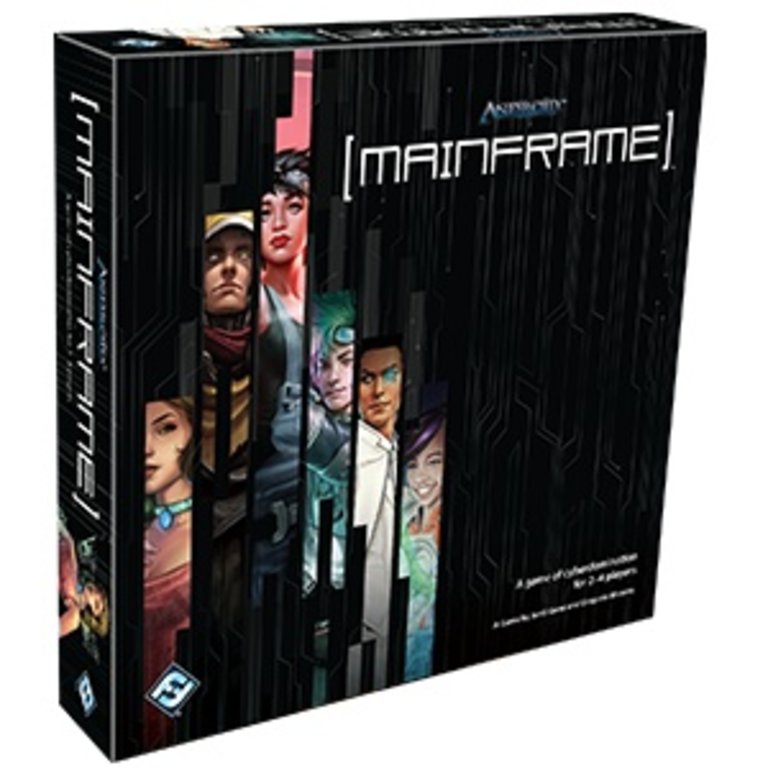 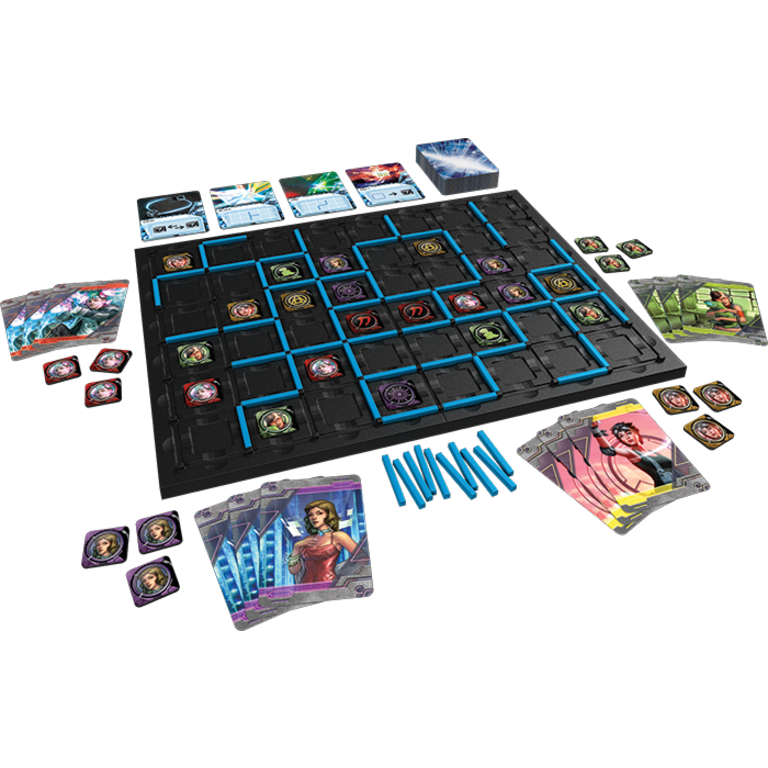 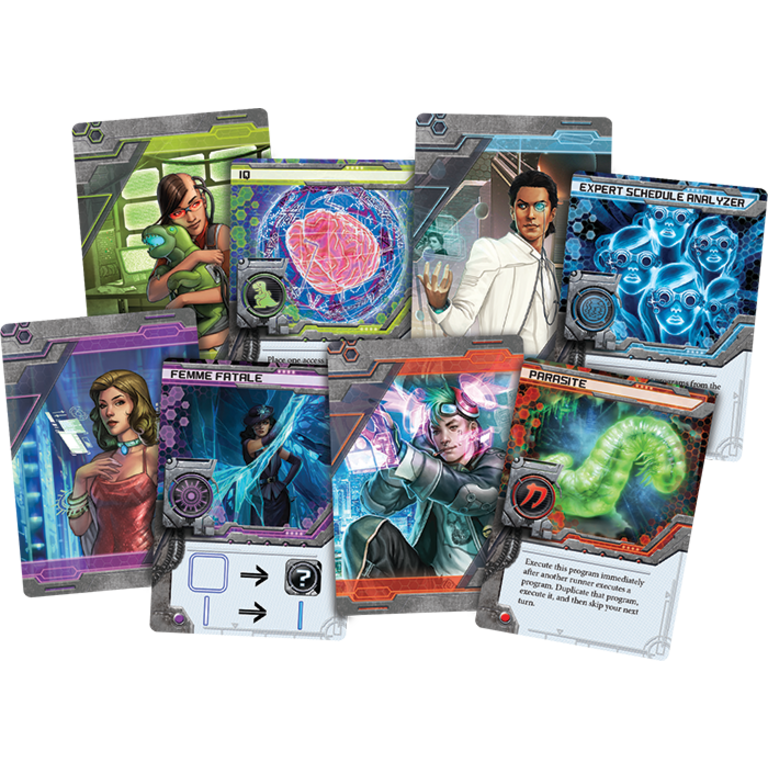 C$42.95
Fantasy Flight Games
Out of stock
Article code 841333101343
The mainframe at Titan Transnational Bank has been isolated. Its security protocols have been deactivated and the sysops shut out. You have 23 seconds to use a Sneakdoor before the security comes back online. Grab what you can
Share this product:

Run fast. Score big. Android: Mainframe is a fast-paced game of futuristic crime and cyberdomination for two to four players.

You are a runner, an elite cybercriminal capable of hacking through corporate servers with ease. When you receive an alert that the security protocols at Titan Transnational Bank have been deactivated, you know it's time to go to work. However, you quickly realize you're not the only runner to have received the alert, and you're not the only runner looking to extract cash and data from Titan's servers…

It's one thing to slice and weave through corporate security. It's another thing entirely to outhack rival runners. Can you do it? In Android: Mainframe, you and your friends compete for control of Titan's various nodes. Establish your access points, reroute data pathways, and secure as many of Titan's nodes as you can. In the end, the runner with the biggest haul wins!

It's Not Your Programs. It's How You Use Them.

As a runner, you rely upon your programs, and in Android: Mainframe, it's your ability to use your programs effectively that will separate you from the competition.At the beginning of the game, you and your opponents shuffle the program stack and then turn the top four faceup, laying them side-by-side in a row. These generic programs are available to anyone, but once used, they're discarded, meaning there's no guarantee you'll have the opportunity to use them later.Each round, then, on your turn, you can take one action. You can execute a program, discard the top card of the program stack to establish a new access point, or pass. Your goal is to use these actions to claim and secure as many of Titan Transnational Bank's nodes as possible, and that means that you need to be able to place partitions to close off areas of the board so that yours is the only access point within them.
Most of the generic programs in the program deck allow you to place a specific number of partitions in a specific shape. You can rotate the shape, but you cannot mirror it. Nor can you place the partitions if you cannot place the whole arrangement. Accordingly, Android: Mainframe rewards your ability to envision how the different shapes might fit on the different sections of the board. But programs can do more than place partitions. They can also move partitions, allow you to swap one of your access points with one of your opponents', and disrupt your opponents' plans in other ways.Because you and your opponents will constantly be disrupting each other's plans, you'll need to keep your strategy and your tactics flexible and fluid. Then, when you recognize the opportunity to make a game-changing play, you need to strike hard and fast, frequently relying upon the power and surprise afforded by your signature programs.

When you assume the role of a runner in Android: Mainframe, you don't become just some ordinary runner; you assume the identity of one of six of the Android universe's most notorious cybercriminals. They run the gamut from a precocious teen wünderkind to a calculating information broker to a bioroid whose core directives have somehow been compromised, compelling him to hack.Each of these different runners comes with five different programs that are unique to him or her alone, and you start the game with a random selection of three of your runner's five signature programs. These are generally more impactful than the generic programs you'll see flowing through the program stack. In fact, in many ways, the signature programs violate the premises established by other programs, which—in a game of futuristic cybercrime—really ought not come as a surprise.The different ways these unique programs can alter the game are almost startling in their diversity. They can allow you to place extra access points, erase your opponents' access points, replicate the programs that your opponents use, or even take multiple actions in a single turn. As a result, you have to remain wary of any signature programs your opponents might still hold in their hands, and much of your success will depend upon your ability to identify the best moments to employ your own.Of course, the fact that each of these six runners and their programs are so tightly themed together means that they offer powerful distinct approaches to the game, and your experience as the dispossessed ristie known as Andromeda will be decidedly different than when you play as the irreverent g-mod Ji "Noise" Reilly.

Titan's accounts stand unsecured. You have only twenty-three seconds, but a lot can happen in twenty-three seconds. Especially when some of the world's greatest runners are competing for fame and fortune. Can you hack your way to the top of the heap? Prove yourself the best of the best in Android: Mainframe!
Game Contents

Sleeves
If you require the 75 Standard sleeves needed for the cards in this game, we recommend: One pack of Ultrapro Card Sleeves Standard Clear (66mmX91mm). This will provide the minimum number of sleeves needed to fully sleeve this game.

Quickview
Fantasy Flight Games
Android Netrunner LCG Core Set (Revised)
The Revised Core Set is your ticket to the not-too-distant future of Android: Netrunner The Card Game.
C$119.95
By using our website, you agree to the use of cookies. These cookies help us understand how customers arrive at and use our site and help us make improvements. Hide this message More on cookies »