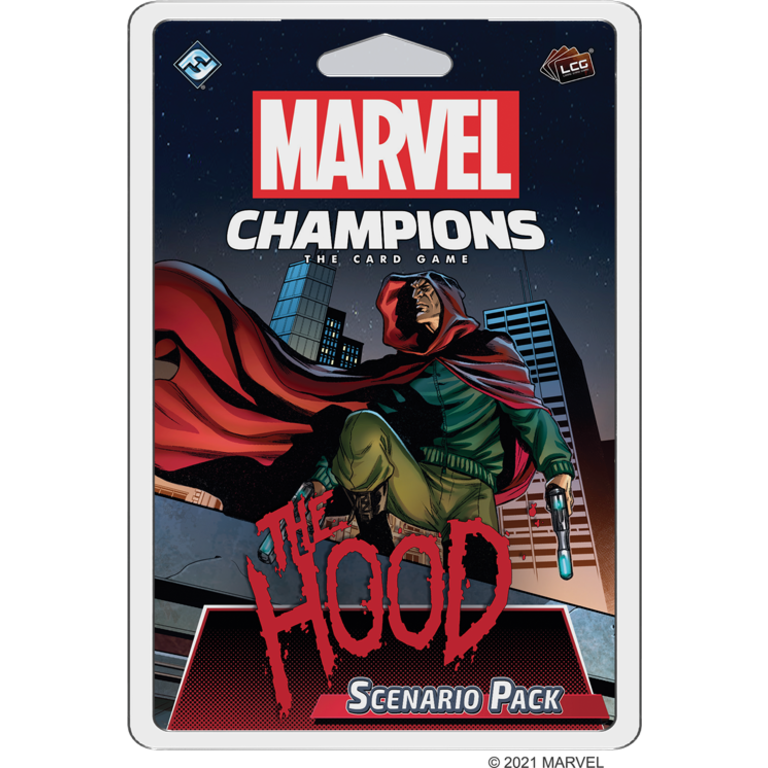 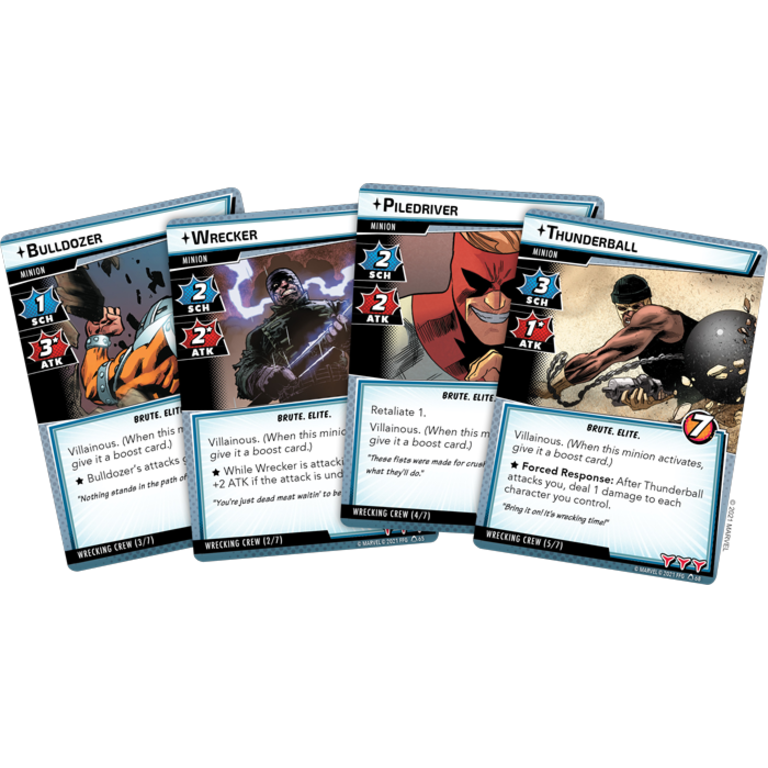 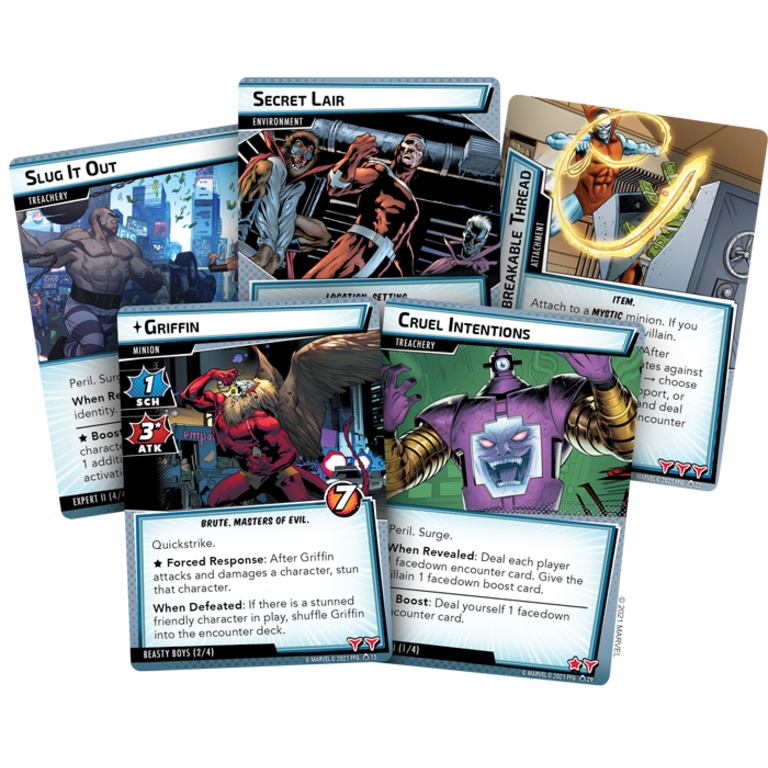 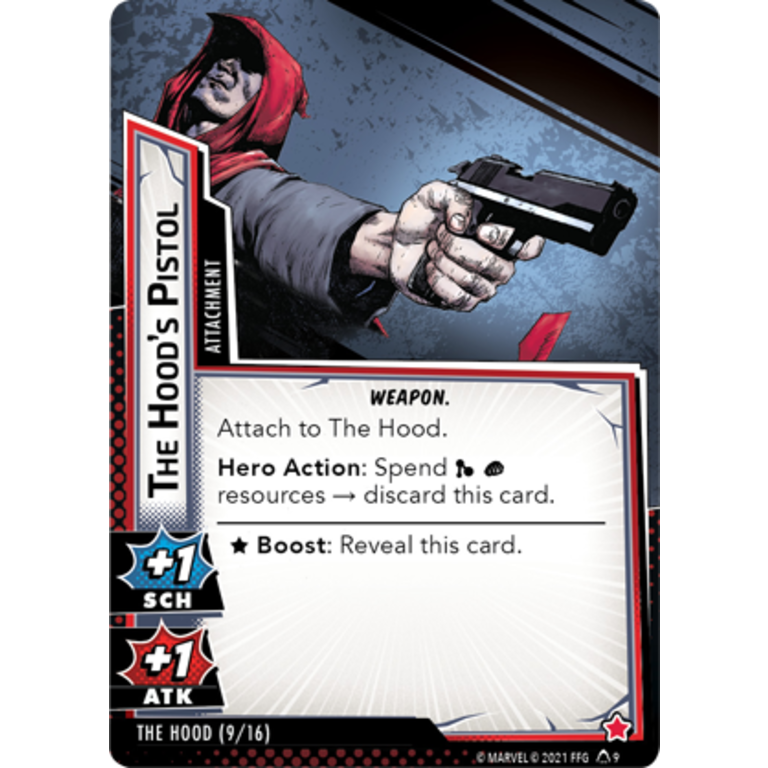 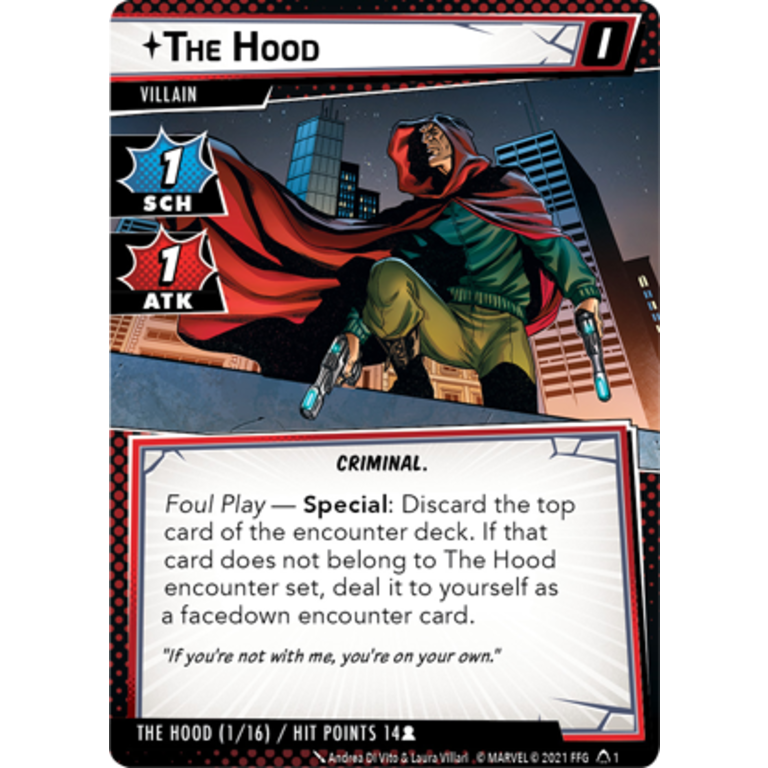 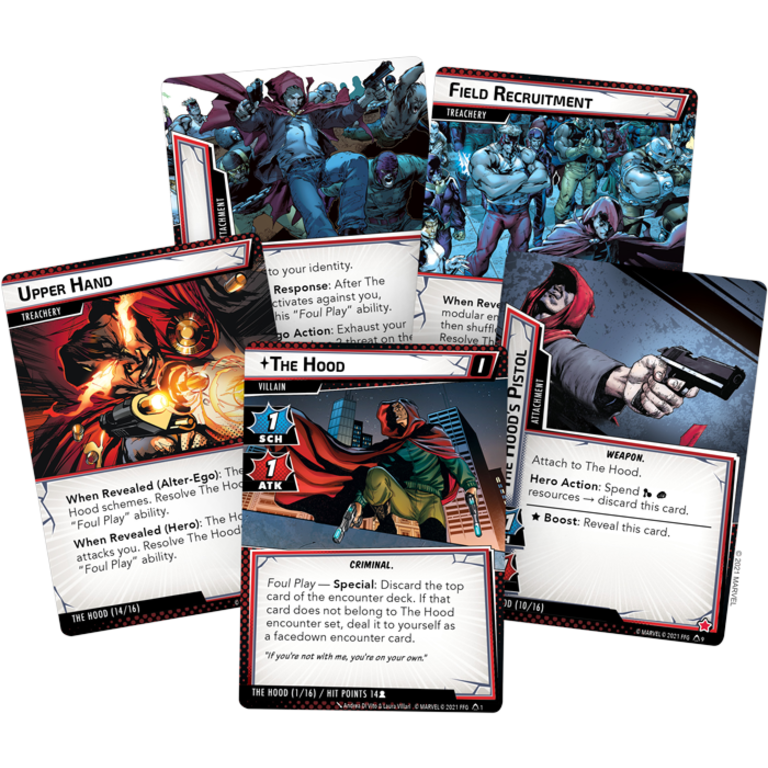 C$21.95
Fantasy Flight Games
Out of stock
Article code 841333113230
“If you’re not with me, you’re on your own.” – The Hood
This 78-card scenario pack introduces a new scenario to Marvel Champions showcasing the Hood and his notorious organization of supervillains.
Share this product:

Ever since he witnessed a battle between Electro and Daredevil as a child, the life of a supervillain was enticing to Parker Robbins. Later, while stealing money to pay for his mother’s medical care, a chance encounter with a demon left Robbins with a pair of boots that let him walk on air and an equally-mystical red cloak. Now, as the Hood, Robbins and his budding criminal empire are swiftly becoming a formidable threat to the people of New York City.

This 78-card scenario pack introduces a new scenario to Marvel Champions showcasing the Hood and his notorious organization of supervillains. Also included are a whopping nine modular encounter sets that can be mixed in with any scenario—including the Hood’s—to add more customization options to your Marvel Champions experience. Are you prepared to take down a dangerous criminal empire?

As the heroes battle the Hood, they will repeatedly be forced to resolve his Foul Play ability through cards like Establish Dominance (The Hood, 7) and Madame Masque (The Hood, 10). A side-effect of this ability is that it swiftly burns through the Hood’s deck, causing him to gradually build up acceleration tokens on the main scheme. As he completes his schemes, the Hood draws more and more criminals into his organization with Promised Prosperity (The Hood, 5A), permanently adding additional encounter sets from the set-aside pool into the game. Add in the chance for some Field Recruitment (The Hood, 12), and suddenly the Hood’s budding empire has grown into a threat that even some of Earth’s mightiest heroes might struggle against!

Even when he isn’t building up his criminal organization, the Hood is still a formidable threat in his own right. Armed with his two Pistols (The Hood, 9), the Hood can easily dish out enough damage and threat to keep heroes on the defensive, and his Mantle (The Hood, 8) can protect him from the heroes’ attempts to slow his momentum. Once he has the Upper Hand (The Hood, 13), the Hood will call in his new supervillain friends to make things even more difficult for the heroes—you’ll have to stay on your toes to keep yourselves from being overwhelmed!

As we mentioned before, this expansion comes with nine new modular encounter sets for your Marvel Champions collection. While you can use any seven encounter sets for the Hood’s scenario, the nine that come in his pack are all thematically related to his criminal empire in some way.

For example, as was mentioned in the S.H.I.E.L.D. briefing in the previous section, the Hood has reached out to notable villains like the scheming Calvin Zabo (The Hood, 34). While not a very imposing minion on his own, the true terror of Zabo is when his Self-Experimentation (The Hood, 33) causes him to transform into the monstrous Mister Hyde (The Hood, 35). Hyde is a powerhouse of a minion with a ridiculous amount of health, which means he is a perfect distraction to keep the heroes away from the Hood’s plans.

Other notable villains in the Hood’s organization are Boomerang (The Hood, 44) and Shocker (The Hood, 45) from the Sinister Syndicate, Crossfire (The Hood, 26) and his Crew, and all four members of the Wrecking Crew. Even beyond the members of his organization, the Hood can arm his lackeys with a Flamethrower (The Hood, 37) from a ransacked armory, take advantage of a Citywide Crisis (The Hood, 59) to keep the heroes busy, and retreat to a Secret Lair (The Hood, 61) to accelerate his schemes even further.

Finally, if all that still isn’t enough challenge for you, this scenario pack also comes with more difficult versions of the Standard and Expert encounter sets. The Standard II and Expert II encounter sets can be implemented in any scenario in place of the usual Standard and/or Expert sets, and they pack quite the punch. For example, Standard II makes the villain a more Formidable Foe (The Hood, 49A), utilizing Dark Dealings (The Hood, 50) to advance the scheme and Total Annihilation (The Hood, 54) to tear through heroes and allies. With all this and more, now is the perfect opportunity to revisit some old foes and see if you can rise to the new level of challenge!

Just because the Hood isn’t a powerful cosmic entity like Thanos doesn’t mean he is any less threatening. Muster your heroes and get ready to challenge his criminal empire when The Hood Scenario Pack arrives this fall!

C$13.77
In stock
Article code 841333110505
With his iconic shield made of pure vibranium, Captain America can lead the charge against even the most fearsome of foes, inspiring those around him with legendary valor.

C$18.95
In stock
Article code 841333131791
As a sometimes-friend, sometimes-enemy of the Guardians of the Galaxy, Nebula blitzes into action in this expansion pack, which introduces her as a brand-new playable hero, along with her fifteen signature cards.

Quickview
Fantasy Flight Games
Marvel Champions LCG Nebula Hero Pack
As a sometimes-friend, sometimes-enemy of the Guardians of the Galaxy, Nebula blitzes into action in this expansion pack, which introduces her as a brand-new playable hero, along with her fifteen signature cards.
C$18.95
Fantasy Flight Games

Quickview
Fantasy Flight Games
Marvel Champions: LCG The Mad Titan's Shadow
The Mad Titan’s Shadow campaign expansion boasts a massive infusion of new content for players’ games of Marvel Champions.
C$49.95
By using our website, you agree to the use of cookies. These cookies help us understand how customers arrive at and use our site and help us make improvements. Hide this message More on cookies »