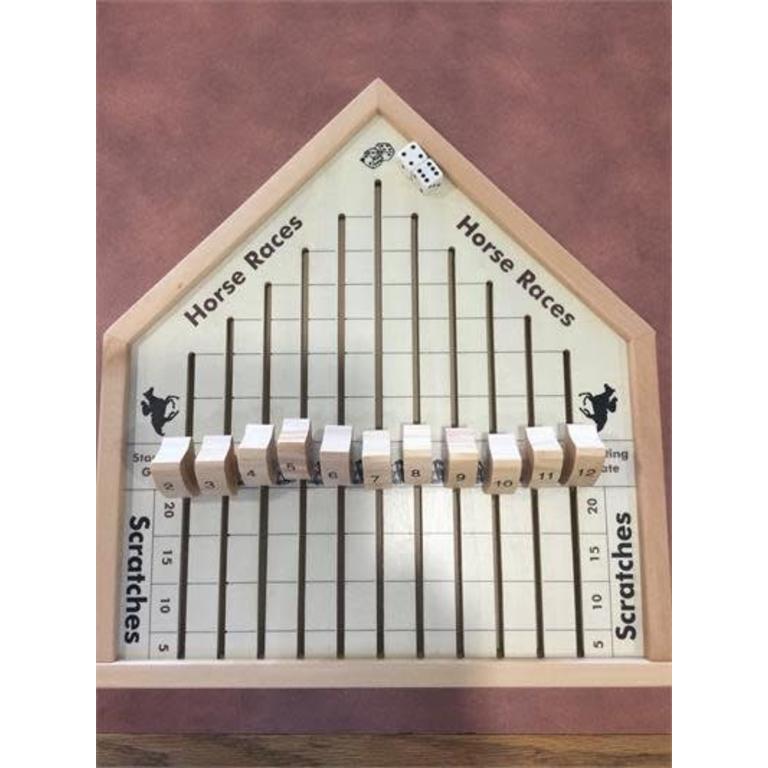 Please Note: There is no red ink printed on the board. The game itself features black and brownish-purple ink. Also, the horses themselves are the same blond color as the wood, and do not have eyes as depicted on the box. The horses are a slightly different shape than shown and also feature numbers printed on the back. Also the "5 scratches space" is not as deep as the other "scratches" spaces. We have sold about 700 of these in the past 20 years, and one customer did complain that this narrow last lane was not wide enough to clearly establish that the #5 scratch horse is in that lane

Limit of 2 per household.

Fun for the whole family from the starting gate to the finish line. Game Includes:
wooden game board
two dice
rules right on the board

Frequently Asked Questions:
Comments: Do the wooden horse racing board games that you sell come with some type of wooden cover that protects the upright horses when the board is being stored? In particular, I'm looking at the two boards you sell for $57.95 (WOODEN HORSE RACE GAME) and $48.95 (BIG BUCKS BOARD. I'm concerned about spending that much (plus S & H) on these boards if the horse pieces could be broken while not in use.

Answer: None of the horse race games come in a wooden box. this has been discussed, and the high extra cost added to the extra cost of shipping due to weight/volume has been the main reason why not
We ship in a sturdy card board box to protect it during travel. Keeping this box for storage for your game is up to you, we're sure a lot of folks do.
As a rule of thumb, the more expensive the game is, the more sturdy the horse are and less prone to breakage accidentally. We have had one on display for years of this very version by Northern Games (soon it will be by a new company called Play It Direct as Northern Games is out of business). The display version was dropped and one horse broke. Some good quality wood glue did the job fine. We had to set some spacers in between the horse to keep it upright, and put some weight on top of the horse, while the glue settled overnight.

To play you also need a pair of 6 sided dice and a std deck of cards.
Poker chips can be substituted for money. We do not recommend using real money to play this game. There. Now the Alberta Gaming and Licensing Commission won't be coming after us. Use chips representing 5 pessos, 10 pessos, and 25 pessos.

From the deck of cards, discard the aces, kings, and jokers, leaving you with 44 cards. Shuffle and deal these cards. Each player may not get the same amount of cards.

Place the horses at the starting gate. Four horses must be eliminated, or “scratched”, before the start of the race.

The next player rolls the dice for the second scratch. That horse moves back to the SECOND line and cost TEN cents for each of those that you have in your hand. Continues with the third and fourth horse scratches, moving up to fifteen and twenty cents, respectively. Pay the designated amounts, and discard the cards accordingly. If you the roll the same number on the dice as a horse already scratched, you (the roller) pay the amount on that horse's line and pass the dice to the next player.

The horses remaining at the gate are now ready for the race to start.

The next person to roll the dice totals them, and move that horse forward one space. However, if the total on the dice is that of a scratched horse, then that player must pay the amount which that horse is standing on.

Play continues around the table, until one of the horses reaches the finish line!

Each card in the winning horse's number wins 25% of the pot.

After the pot has been divided, the cards are passed to the next player, the horses are all moved to the starting gate, and you are ready to begin the next race!

A pair of ones on the dice would be a #2 horse.