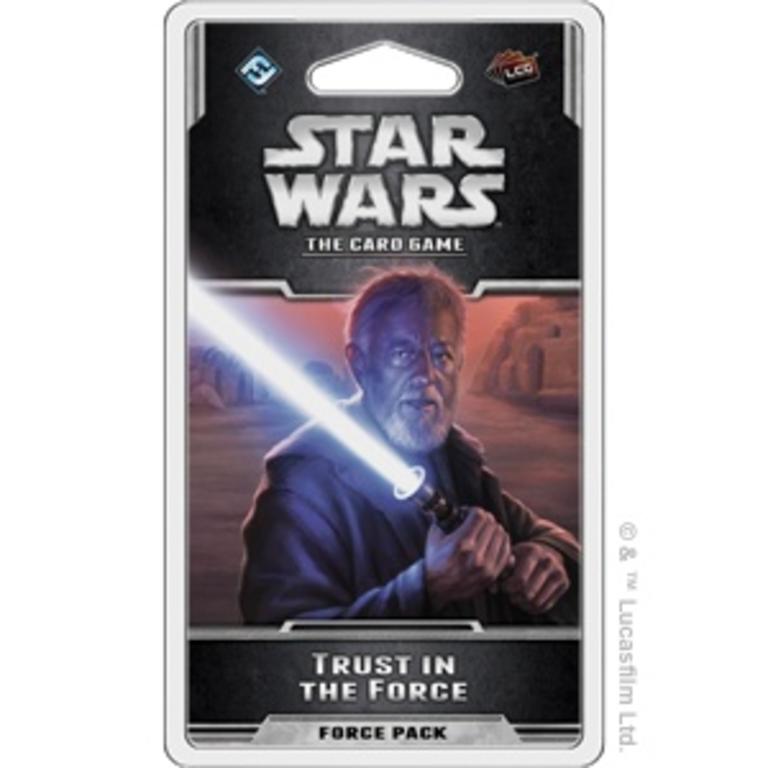 C$18.95
Fantasy Flight Games
Out of stock
Article code DNR-841333103125
Share this product:
"This is Master Obi-Wan Kenobi. I regret to report that both the Jedi and the Republic have fallen, with the dark shadow of the Empire rising to take their place. This message is a warning and a reminder for any surviving Jedi: Trust in the force. Do not return to the Temple. That time has passed, and our future is uncertain."
Obi-Wan Kenobi

Trust in the Force is the fifth Force Pack in the Alliances cycle for Star Wars: The Card Game.

While the mighty mechanical feet of the Galactic Empire's AT-ATs and AT-STs trample across the galaxy, the defenders of freedom hide themselves on desert planets and in the icy wastes, biding their time until they can mount a critical counterattack. The Jedi haven fallen. Alderaan has been destroyed. But these Scouts, Leaders, Troopers, and Force Users still have hope for a brighter future. They still trust that if they can rally new recruitsand spur new worlds to actionthey can still win the war.

With its sixty new cards (including two copies each of five new objective sets), Trust in the Force pushes the Alliances cycle closer to its climactic conclusion. Even as it continues to develop the cycle's support for decks that feature two or more affiliations, Trust in the Force follows the march of General Veers and his Walkers across the frozen surface of Hoth. It lends support to those massive war machines with a new Scum objective set that protects and enhances your Vehicles. And it peers into the hidden corners of Hoth and Tatooine, where Jawas, Rebel Troopers, and Jedi Masters all work in secret to rally new forces against Imperial tyranny.

This is not a standalone game experience. Requires a copy of the Star Wars: The Card Game Core Set to play.
By using our website, you agree to the use of cookies. These cookies help us understand how customers arrive at and use our site and help us make improvements. Hide this message More on cookies »