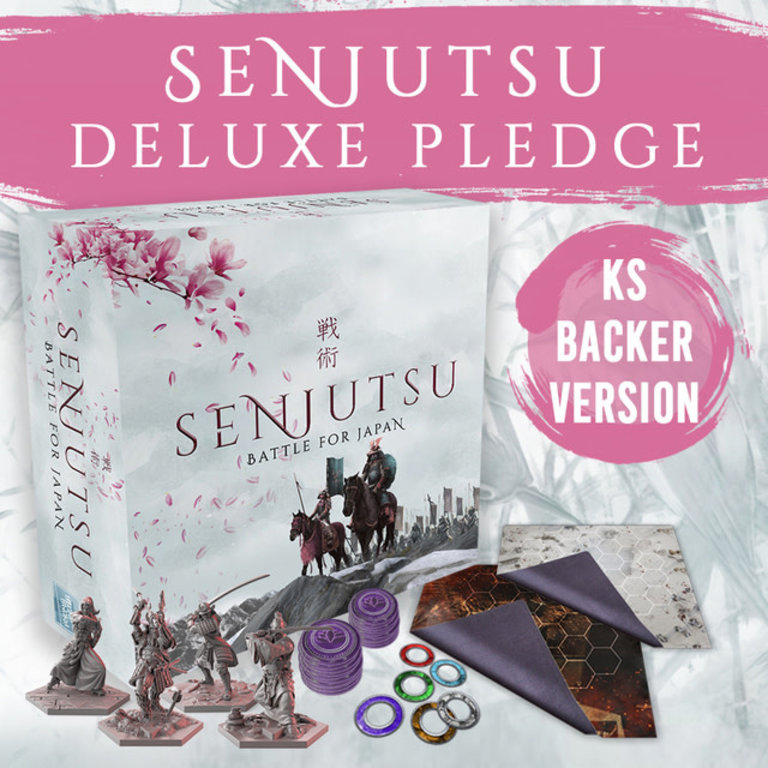 The Retailer Deluxe version includes the same content as the Kickstarter "Backer" Deluxe version. You get everything the Backer gets in their version of the Deluxe Game.

Senjutsu is a ferocious Samurai duelling game for 1 to 4 players.

Choose from the Student, Master, Warrior and Ronin and before crafting a deck of 40 Ability Cards to represent your Samurai and their fighting style.

Winning the game is simple, inflict 5 wounds to the enemy Samurai and they are defeated.

Senjutsu includes a beautiful hex-based Battlefield Board which provides the perfect gaming surface for this tight, melee-driven board game.

Every card has its own "initiative" that defines which card acts first within the turn. Matching your opponent's initiative allows you to perform dodges and blocks, making for fast yet tactical deck building and decision making on when to play your best cards!

Every card has its own "initiative" that defines which card acts first within the turn. Matching your opponent's initiative allows you to perform dodges and blocks, making for fast yet tactical deck building and decision making on when to play your best cards!

Cards can also allow or force you to change your "Kamae", which represents how you character fights with regards to fighting stance and mental state.

Some cards also generate "focus", spending focus allows you to use your characters most devastating abilities, some players might choose to save up focus for one singular strike, whereas others might spend it early in a gambit to defeat their foe before their most dangerous attack can be used!

Players each select a card for that turns activation.

The initiative decides which card activates first, this means you can either go in for a lightning strike or wait until you opponent has acted and spring your trap, there are many ways to win in Senjutsu.

When the cards are selected and played then you work out who acts first, and then perform the actions.

Sometimes this is simply moving, other times it is a deadly thrust from a weapon!

Many cards also have secondary abilities, for example if you are in the defensive Kamae when you play "Quick Stab" you additionally draw up to two cards.

No matter how deadly an attack is, you can always attempt a block!

​Blocking cards require you to match the initiative number on the attacking card.

​These can be played out of your hand as usual, or some allow you to interrupt the regular flow of play and block in an emergency.

There are many ways you can defeat your opponents in Senjutsu, on the battlefield you will learn which character suits your play style best and which card set for them is the most powerful.