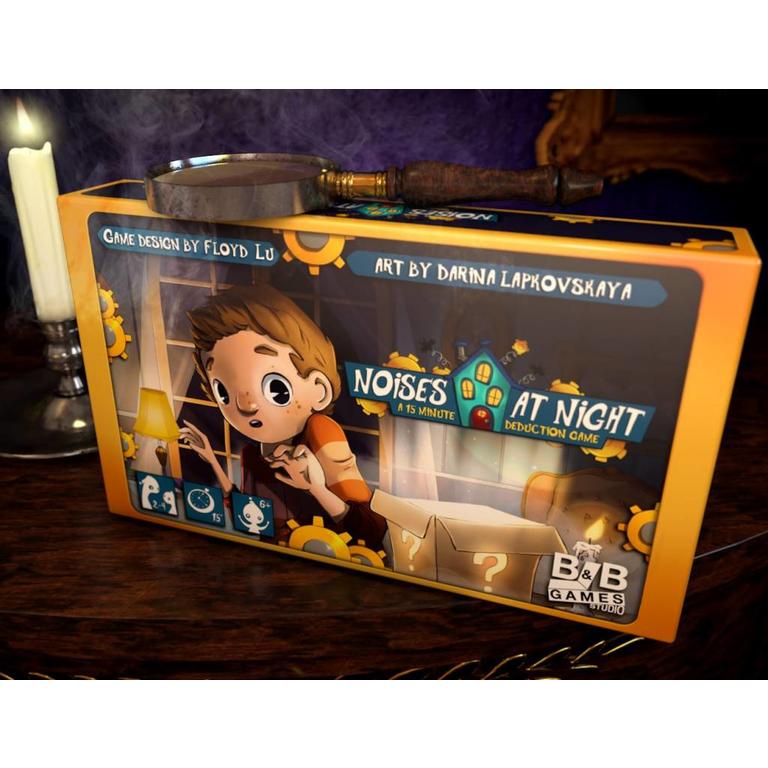 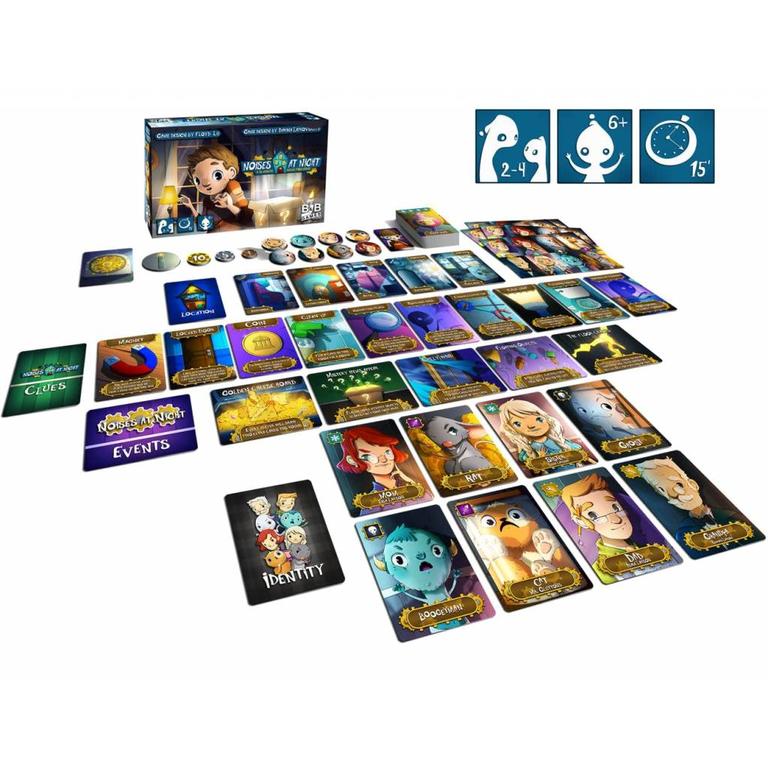 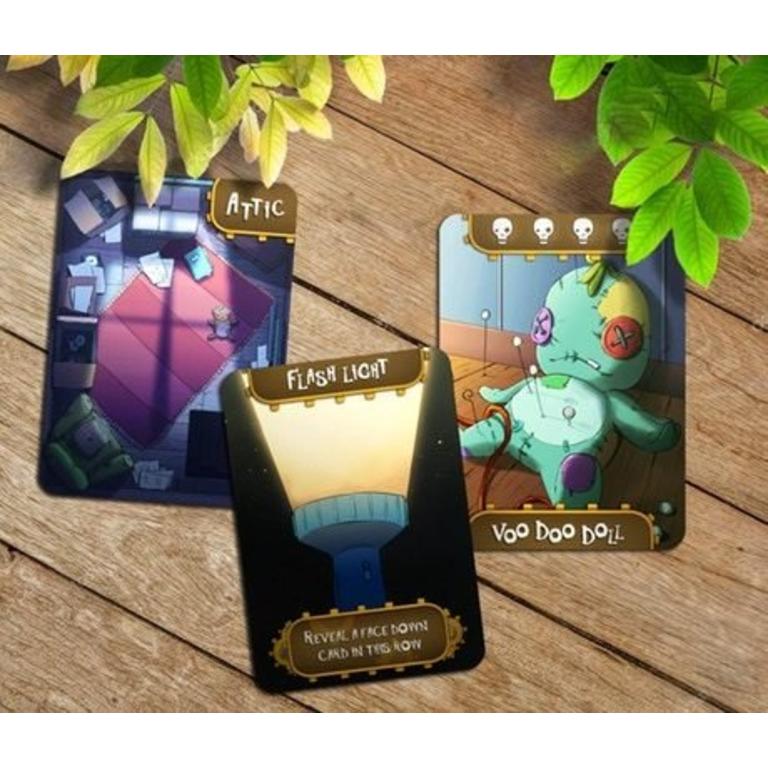 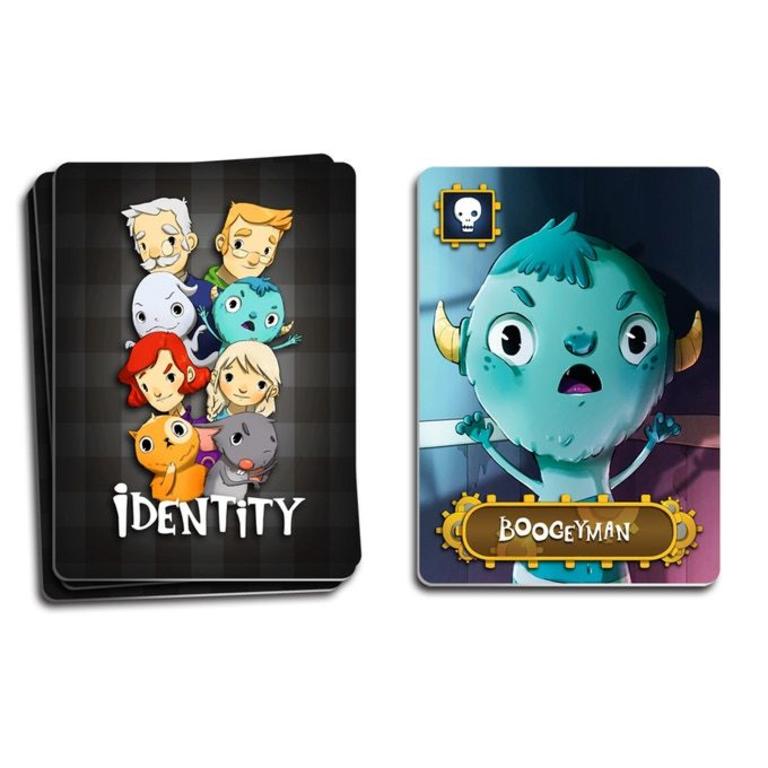 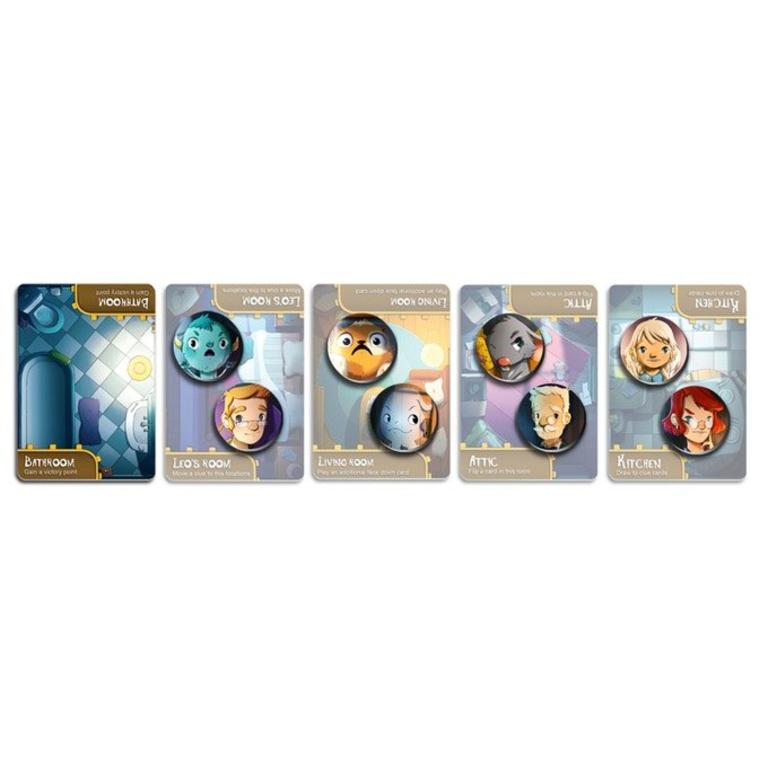 A crashing noise in the kitchen, a tumbling sound in the attic, a scratch at the window; there is something odd going on in Grandpa's spooky house. It's up to Leo to solve the clues, and figure out the suspects in each room before the timer runs out. But beware, it has been rumored that there are ghosts and monsters lurking in the night!

In this competitive deduction card game, up to four players will compete to score victory points. At the beginning of the game, each detective will receive a secret identity card which will have it's own character image and a custom objective symbol on the top left corner of the card.

On each player's turn, two clues are placed under locations to score community points.  Points are achieved in many ways, but in general, ahem.. just be a good detective.  In this example, player one has just placed a card with four flower symbols in Leo's room, and another card with four skull symbols in the living room.  Each symbol is worth 1 point at the end of the game.

Some clues are action cards, and are performed at the time they are played.  Playing cards in a location will also trigger room effects, which may alter the course of the game.

Face up cards will score a point per objective symbol.  When this happens, you are scoring for everyone. Therefore, take extra precaution when placing clues down, especially since other players don't know your identity. In addition, players will have a location at the start of the game. Any cards played in your location will score you one bonus point each clue card that is stacked in that room.

If you suspect somebody, don't be shy, simply solve the identity of that player in the guessing phase.  If you are victorious, you will be rewarded with additional guessing points. If not, the person you are guessing will be getting the hard earned points. Its not the end of the world, its just a penalty for poor detective work.

At the end of each round, the timer will go down by one, and a new event will unfold.

When the timer reaches zero, the game is over. The remaining identities get revealed so that all the players know which points can be counted towards their character. The person with the most victory points is clearly the best detective.

Back to home
Bézier Games

C$19.95
In stock
Article code 722301926246
To be successful, you must destroy the influence of your rivals and drive them into exile. In these turbulent times there is only room for one to survive.

Quickview
Indie Games
Coup Card Game
To be successful, you must destroy the influence of your rivals and drive them into exile. In these turbulent times there is only room for one to survive.
C$19.95
Indie Games

C$23.95
In stock
Article code 722301926178
The Resistance is a party game of social deduction. It is designed for five to ten players, lasts about 30 minutes, and has no player elimination. The Resistance is inspired by Mafia/Werewolf, yet it is unique in its core mechanics, which increase the res

Quickview
Indie Games
The Resistance Third Edition (Red Box)
The Resistance is a party game of social deduction. It is designed for five to ten players, lasts about 30 minutes, and has no player elimination. The Resistance is inspired by Mafia/Werewolf, yet it is unique in its core mechanics, which increase the res
C$23.95
Bézier Games

Quickview
Restoration Games
Dinosaur Tea Party
It's the most sought-after invitation of the year: Dinoton Abbey for high tea.
C$22.95
By using our website, you agree to the use of cookies. These cookies help us understand how customers arrive at and use our site and help us make improvements. Hide this message More on cookies »