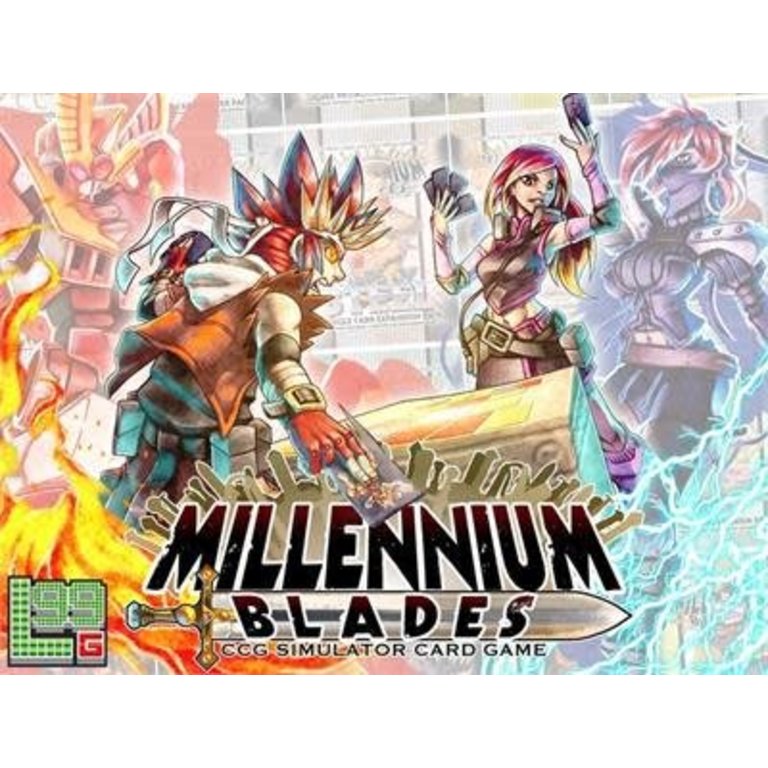 In this game you will build decks, play the meta, acquire valuable collections, crack open random boosters, and compete in tournaments for prizes and fame. The game takes you from Starter Deck to Regionals in about 2-3 hours.

Multiple games can also be chained together to form a Campaign, going from Regionals to Nationals in game 2 and from Nationals to Worlds in game 3, with each game introducing ever more powerful cards and higher stakes, but also resetting the power of the game so that each player has a fair chance to win each 'season' of the campaign.

At its heart, it’s a commodity trading game, except that instead of cubes or stocks, the things you’ll be buying, selling, and speculating on are trading cards that can be used throughout the game in periodic tournaments. By trading wisely, playing the market, working together with friends, building collections, and winning tournaments, you’ll secure points and become the Millennium Blades World Champion.

The game features a system of card pods, where you will play with about 400 of the base game’s 600 cards every game.

Back to home
Level 99 Games

out of stock
Quickview
Level 99 Games
Millennium Blades: Professionals Mini-Expansion #6
C$14.95
By using our website, you agree to the use of cookies. These cookies help us understand how customers arrive at and use our site and help us make improvements. Hide this message More on cookies »