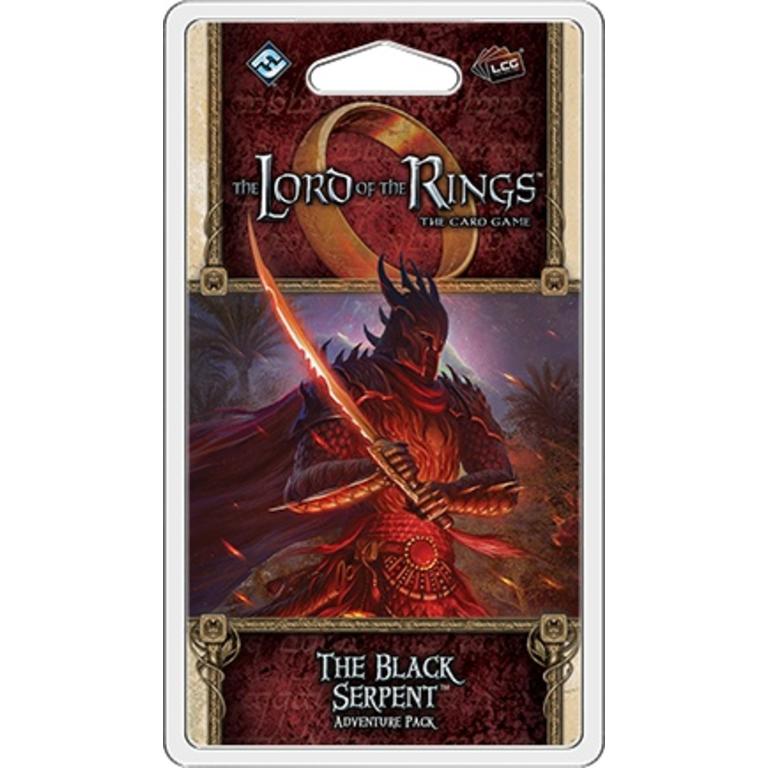 The Lord of the Rings LCG: Haradrim Cycle 4 - The Black Serpent

C$19.95
Fantasy Flight Games
Out of stock
Article code 841333101602
Share this product:
Hundreds of miles from home. Stranded in enemy territory. Outnumbered. Short on supplies It's time to be a hero!

Fantasy Flight Games is proud to announce the upcoming release of The Black Serpent, the fourth Adventure Pack in the Haradrim cycle for The Lord of the Rings: The Card Game. Its sixty cards (which include a new hero and three copies of each new player card) lead several of Middle-earth's greatest heroes along a detour from their homeward path. Even in the arid wastes of Harad's deserts, even after traveling league upon grueling league, and even after just barely surviving their encounters with Orcs, Wargs, and giant spidersthe heroes remain true to themselves and committed to their fight against the Dark Lord.

Accordingly, when your heroes come across an opportunity to strike against a caravan of Haradrim carrying tributes to the Dark Lord of Mordor, they hesitate only long enough to devise a plan. When the caravan camps inside the walls of a dilapidated desert fortress, the heroes and their allies will launch their ambush. But will their tactics prove sound enough to account for the caravan's greater numbers? You'll join these heroes and fight alongside them in the new scenario from The Black Serpent.
By using our website, you agree to the use of cookies. These cookies help us understand how customers arrive at and use our site and help us make improvements. Hide this message More on cookies »