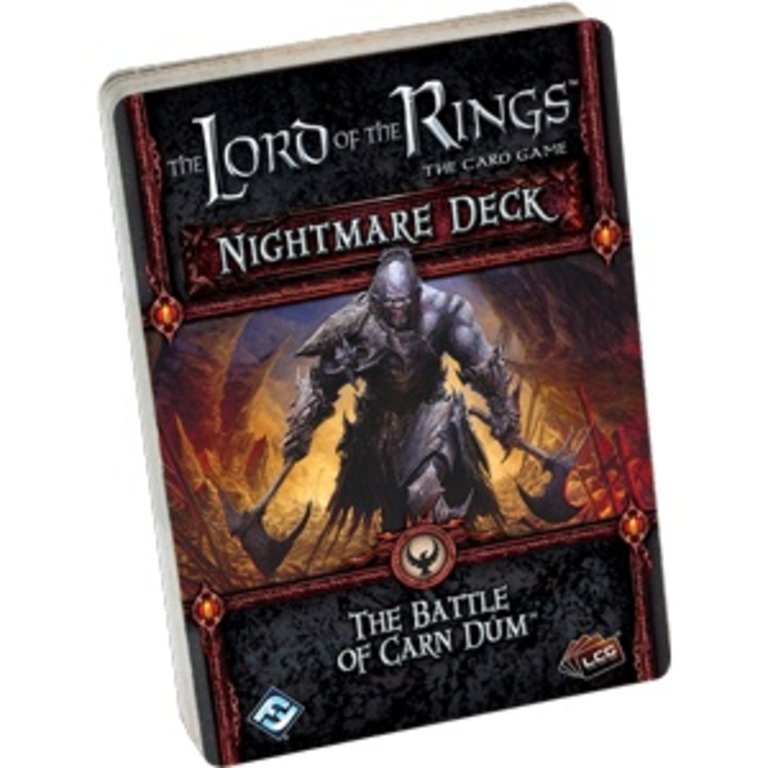 The Lord of the Rings LCG: Angmar Awakened Cycle 5 - The Battle of Carn Dum Nightmare Deck

C$9.95
Fantasy Flight Games
Out of stock
Article code 841333102463
Share this product:
Nightmare Decks for The Lord of the Rings: The Card Game allow you to revisit your favorite scenarios cast in the shadows of the game's challenging Nightmare Mode. Featuring deadlier enemies, darker locations, and more terrifying surprises, each Nightmare Deck introduces new, alternate encounter cards and instructions for using them to reshape a scenario's encounter deck. The result? A nightmarish journey through territory you thought you knew, but with twists and turns that will have you on the edge of your seat!

In The Battle of Carn D√ªm, you command some of Middle-earth's greatest heroes as they join with the Rangers of the North and the Elves of Rivendell to lead an assault against the dark fortress of Carn D√ªm. There's everything you'd expect from a heated battleenemies, a terrible Captain, and the chaos of war. With The Battle of Carn D√ªm Nightmare Deck, these elements are all given an extra bit of weight, especially the chaos of war as it's represented by the game's shadow effects. You'll find deadlier enemies; cards that increase the terrible might of the Undead Captain, Thaurdir; and other cards that increase the potency of the scenario's mechanics that power your foes with piles of shadow cards.

Nightmare Decks are available via FFG's In-House Manufacturing and may differ subtly in appearance and texture from Core Set cards. Players are thus encouraged to utilize opaque or art sleeves while playing in Nightmare Mode.

Contents:
20 Cards
By using our website, you agree to the use of cookies. These cookies help us understand how customers arrive at and use our site and help us make improvements. Hide this message More on cookies »