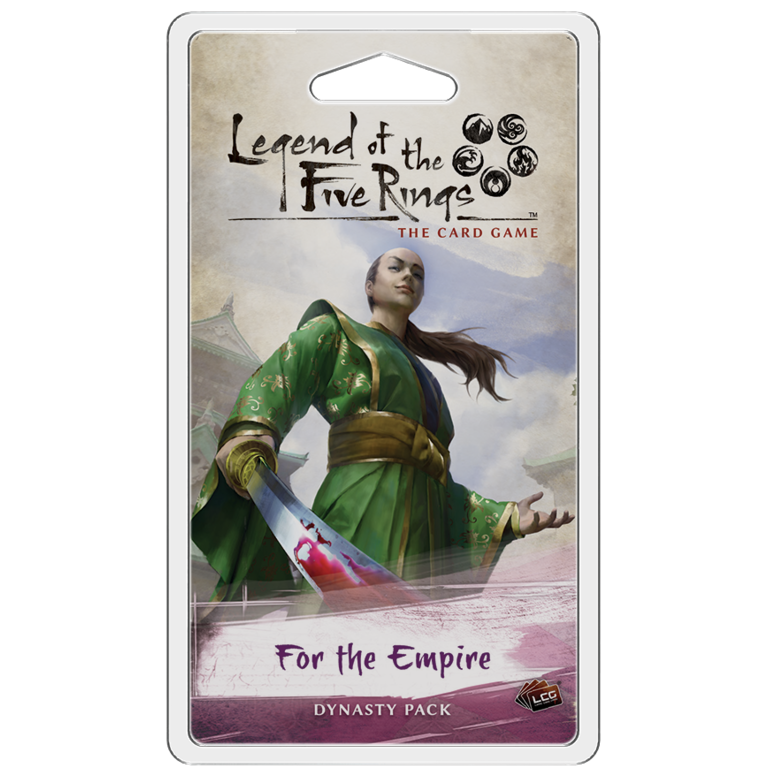 Legend of the Five Rings LCG: Inheritance Cycle 1 - For the Empire Dynasty Pack

C$20.95
Fantasy Flight Games
Out of stock
Article code 841333108915
Take to the battlefield with For the Empire, the first Dynasty Pack in the Inheritance Cycle for Legend of the Five Rings: The Card Game!
Share this product:

Though the Great Clans clash on the battlefield and in the courts, they have one common cause. Each, in their own way, serves the Empire. The Crab may cut a smuggling deal to obtain more jade, but this stone is vital to the protection of the Kaiu Wall. Likewise, no matter how dishonorable the task, a Scorpion can always find solace in their duty to Rokugan. Even the Emperor's actions are guided by what will be best for the Empire.

The Inheritance cycle marks a drastic change in the status quo of Rokugan as the Great Clans continue to battle amongst themselves. With the Emerald Empire becoming more dangerous than ever, iconic samurai must disguise themselves in their travels, only revealing their true identity when they are needed most. Furthermore, Bushi and Courtiers alike are now more valued than ever, fighting for their clans as Rokugan shifts around them.

While the Imperial and Elemental cycles were released over the course of six weeks, the Inheritance cycle will be released on a one pack-per month basis, providing a steady stream of new cards for Legend of the Five Rings: The Card Game!

More than Meets the Eye

In these dangerous times, a samurai must sometimes hide their true identity in order to best serve their clan and the empire. For the Empire introduces a brand-new mechanic that sees unique characters enter conflicts disguised as other samurai before revealing their true skill and abilities at the most opportune time. These samurai bear the new disguised keyword, followed by a trait or clan affiliation—for example, Akodo Zentarō (For the Empire, 9) has the disguised keyword followed by the Bushi trait. These disguised characters can be played normally, but they also have a unique way of entering the battlefield from your provinces or from your hand.

Importantly, your disguised samurai can't have additional fate put on them when they're played in this way! Thematically, they are the same samurai that has been in the conflict all along, only with their true identity revealed. Even if they are a dynasty card like Akodo Zentarō, you can use the disguised keyword any time you could play a character from your hand during the conflict phase, and they will always enter the field unbowed.

Disguised characters have abilities that can drastically change the face of the game, and with Akodo Zentarō able to steal a holding from an attacked province, you can turn the tables on anyone who dares stand up to the might of the Lion.

While Courtiers do the work of their clan in the glamorous courts of the Emerald Empire, Bushi serve their clans in the blood and dirt of the battlefield. Glorious tacticians, skilled duelists, cavalier commanders, and even the crown prince himself are represented throughout the Inheritance cycle, their boldness and skill overwhelming their foes in military conflicts.

The Crab need these Bushi to defend Rokugan from the horrors to the south—should these samurai fail to hold the Kaiu Wall, the Emerald Empire would fall to corruption and rot. The Fifth Tower Watch (For the Empire, 5) understand the sacrifices that must be made to prevent Rokugan from falling to this terrible fate. When you sacrifice a character with Fifth Tower Watch on the field, your opponent must bow one of their characters with a lower military skill than the sacrificed character. With this and other effects, every sacrificed character serves an even greater purpose, and this ability is emblematic of one of the Crab’s major themes in the Inheritance cycle: sacrifice. While the Elemental cycle saw the Crab tempted by the power of mahō, the Inheritance cycle examines the human cost of defending the wall, and the strength this gives Rokugan’s most stalwart clan.

Even the Phoenix, known for their focus on Shugenja and pacifism, train Bushi to defend the clan when military conflicts are inevitable. The Shiba Sophist (For the Empire, 10) is a two-cost Bushi that lets you search your conflict deck for cards that share a Trait with the element of the contested ring. Not only is the Shiba Sophist a great way to enhance your hand of conflict cards, the Bushi trait itself is a valuable asset in the Inheritance cycle.

For example, the Shiba Sophist is a viable target for Purity of Spirit (For the Empire, 19), a new event that allows you to honor a Bushi for the duration of a conflict. While this honored status does not last, it can be the jump you need to break a province, especially when combined with the massive glory of a card like the Serene Warrior (Core Set, 88). At one influence, Purity of Spirit is also an attractive splash for the Lion Clan, a clan known for their prolific Bushi, who can also take advantage of A Perfect Cut (For the Empire, 22) to emerge victorious in the battlefield.

The honor of a Bushi is essential to victory, and none are as honorable or glorious as those hailing from the Hantei dynasty. Favored by Heaven, this long line of Emperors has held Rokugan together for centuries. For the Empire sees the Crown Prince, Hantei Sotorii (For the Empire, 13) himself, grace us with his presence. With the ability to boost the glory of any character participating in a conflict, Sotorii can pump your own honored characters or shame your opponent’s characters who have fallen into the pit of dishonor. The pure presence of Hantei Sotorii is enough to mold the shape of battle, and his skill in a conflict is just as impressive. However, allies of Sotorii must beware—the crown prince is prone to fits of rage, and the pride keyword could be his downfall should he experience defeat.

A Line in the Sand

With battles breaking out across Rokugan, Bushi are more important than ever. As battle lines between clans are drawn, it will be these samurai who help determine the fate of their clan. Will you stand alongside these warriors in the conflicts to come?

For the Empire includes one copy of three new cards, and three copies of nineteen new cards for Legend of the Five Rings: The Card Game. This Dynasty Pack focuses on the brave Bushi who fight for their clans on battlefields strewn with blood and dirt. Furthermore, look for the introduction of the new disguised mechanic, which sees hidden iconic samurai take on the identities of unassauming non-unique characters, only to reveal their true skill and ability at the most oppurtune moment. All of this and for awaits you in For the Empire!

C$49.95
Out of stock
Article code 841333104146
Legend of the Five Rings: The Card Game is a player-influenced LCG¬Æ that sees two players take on the role of one of the seven Great Clans of Rokugan,

Legend of the Five Rings LCG Premium Expansion 1: Children of the Empire

Quickview
Fantasy Flight Games
Legend of the Five Rings LCG: Clan Pack - The Emperor's Legion (Lion Clan)
RELEASE NOVEMBER 1 2019
C$26.95
By using our website, you agree to the use of cookies. These cookies help us understand how customers arrive at and use our site and help us make improvements. Hide this message More on cookies »