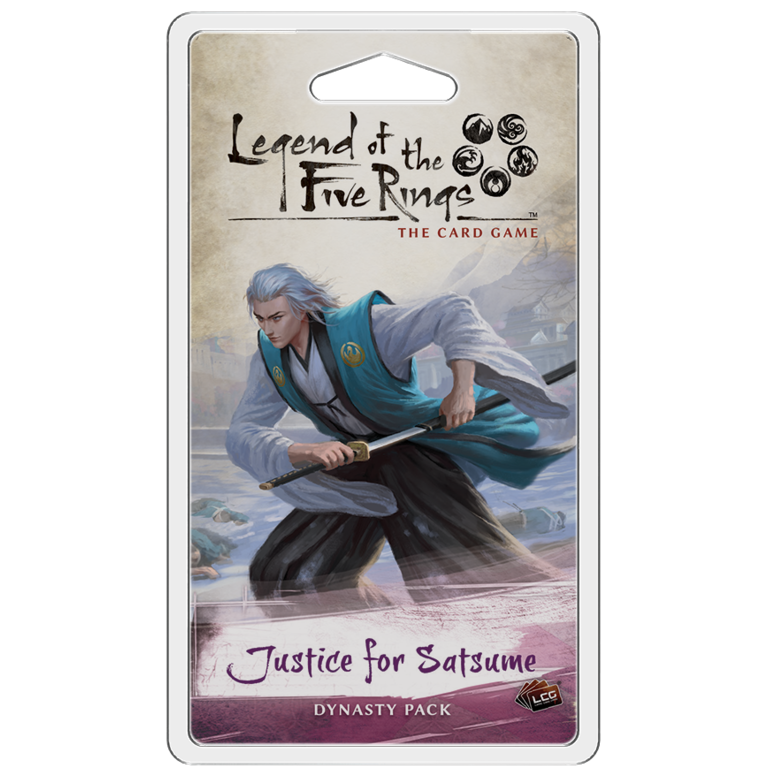 C$20.95
Fantasy Flight Games
Out of stock
Article code 841333108939
The Emerald Empire is breaking down into chaos—who will you support?
Share this product:

All eyes are on Otosan Uchi as a chaotic Imperial succession is hastily planned. While the Imperial City is the focal point for these dramatic events, strife is infesting Rokugan from all angles.

Justice for Satsume continues the themes of the Inheritance cycle, placing an emphasis on Courtiers and Bushi, introducing two new disguised characters to surprise your opponent, and offering up two Clan Champions!

The Field of Battle

The Right Hand of the Emperor is a straightforward clan, relying on pure military might to win conflicts against the other Great Clans. Throughout the Inheritance cycle, the Lion Clan gains special advantages when they have fewer cards in hand than their opponent. Naturally, this encourages low bidding, keeping your hand size low and your honor high.

The Matsu Swiftspear (Justice for Satsume, 53), for example, is a modest two-cost Bushi with two military and two political skill. However, her true value comes when you have fewer hands than your opponent, giving the Swiftspear an additional two military skill. If you can maintain the number of cards in your hand via low honor bids—or play enough cards in a conflict to drop below your opponent—the Matsu Swiftspear is one of the most efficient samurai in the game, contributing greatly to military conflicts for minimal investment.

While the Matsu Swiftspear defends the Lion on the field of battle, the Steward of the Rich Frog (Justice for Satsume, 54) defends the clan’s honor. While you have fewer cards in hand than your opponent, the Steward of the Rich Frog keeps your characters from receiving dishonor tokens! With three political skill, the Steward is already a sound investment, but protecting your characters from cards like Way of the Scorpion (Core Set, 185) can ensure the Lion don’t fall for any tricks, keeping their honor and glory intact.

Of course, both of these abilities are meaningless if you can’t keep fewer cards in hand than your opponent. Luckily, the Lion have new tools to ensure this happens. Sharpen the Mind (Justice for Satsume, 63) is a zero-cost attachment that lets you discard a card to give the attached character an additional three military and three political skill. At two influence, Sharpen the Mind can fit into a number of different decks, but the cost of discarding a card can become an even greater boon for the Lion Clan, whose single-minded focus can lead to a glorious victory.

The Unicorn are no strangers to overwhelming their foes with a stampede of warriors and courtiers.

The Shinjo Gunsō (Justice for Satsume, 58) is not the most fearsome warrior, but instead acts as a beacon for the samurai of the Unicorn Clan. When you play this character, you can search the top five cards of your dynasty deck for a low-cost character and put it in into play. The Gunsō can bring cards like the Young Warrior (Warriors of the Wind, 5) and Honest Challenger (Children of the Empire, 37) to the field of battle, helping the Unicorn overwhelm their opponents with pure numbers and skill.

The Wayfarer’s Camp (Justice for Satsume, 59) offers another way to deploy your swarm tactics, letting you play two cards from your provinces before turning a card faceup. Not only does this empty your provinces quickly and put you in position to pass first, you also gain the ability to play an additional card from your provinces, further outnumbering your foe with your Unicorn horde.

The more non-unique Unicorn samurai you have on the field, the greater benefit Ujik Tactics (Justice for Satsume, 66) provides. This free event simply boost the military skill of your non-unique characters until the end of the conflict, making it the perfect card for a large-scale assault. Depending on the number of Unicorn in the conflict, this could even be enough to break a province.

The Inheritance cycle introduces disguised characters into the world of Legend of the Five Rings: The Card Game. These samurai will only reveal themselves at the most opportune time, shedding their disguise and unleashing their true strength when your opponent least expects it.

The Scorpion’s Shosuro Miyako (Justice for Satsume, 65) is a master of disguise, and in fact can only be played through the disguised keyword, and only by replacing a non-Scorpion character. At two influence, this means Miyako is much more consistent in a deck that only splashes Scorpion cards. However, when she does enter the field, she has an immediate impact, helping you to dishonor a non-unique character your opponent controls. As a conflict character, Miyako can reveal herself at the most opportune time, deflating your opponent’s skill with a dishonor token and her own formidable talents.

The Hour of the Boar is upon Rokugan. As all eyes turn towards the Imperial City of Otosan Uchi, what other fractures are appearing across the Emerald Empire? Discover a new war in the Justice for Satsume Dynasty Pack, releasing in the third quarter of 2019!