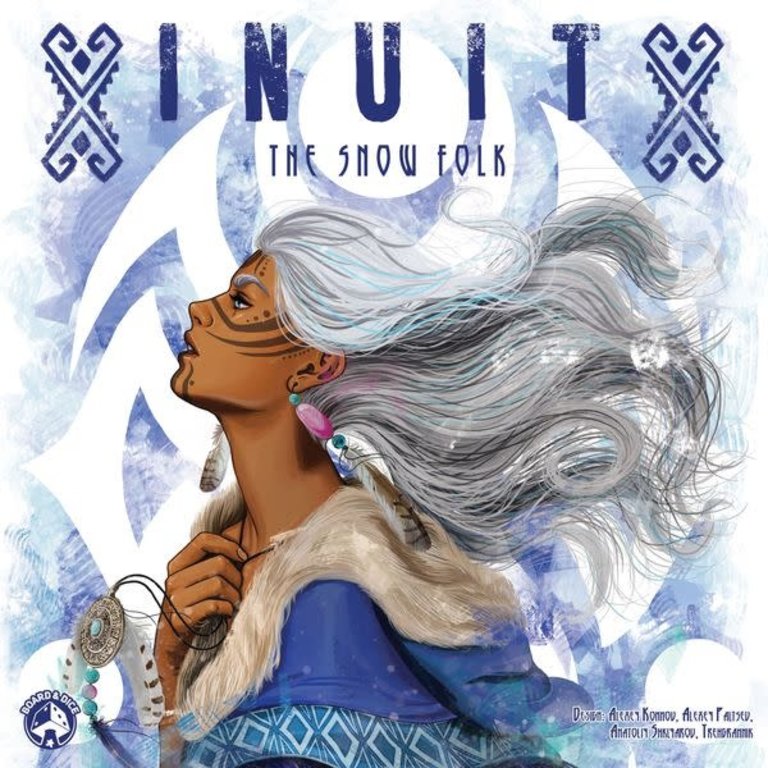 Inuit: The Snow Folk is a card-based strategy game of drafting and tableau building for 2-4 players.

Inuit: The Snow Folk is a creative reimplementation of Natives, a 2017 release, updated with new lavish art and adding 2 new modular expansions: The Spirit of the Great White and Rising Sun.

From the Board & Dice team:
Portraying a living and existing culture and people that is not your own should not be taken lightly. Our motivation for publishing an Inuit themed board game is rooted in appreciation and respect for Inuit, their culture and history.

While Inuit: The Snow Folk is not intended as a simulation of Inuit life, but rather a thematic portrayal of certain aspects of Inuit culture, acknowledging a board game cannot possibly encompass the full and rich history, traditions, and life of an Inuk — nor does the game pretend to do so — it was, from the very beginning, important to us to make sure that inaccuracies were avoided to the greatest extent possible. Therefore, in addition to conducting our own research, we sought feedback and collaboration with various Inuit organizations, institutions, and individuals.

Our desire is for this game to pay respectful tribute to Inuit everywhere. While Inuit advice and feedback has been incorporated into the game and its artistic interpretation, we also realize there are many cultural aspects and nuances of Inuit culture that we are unable to properly portray.

Perhaps, after playing this game, you will gain a richer appreciation for Inuit and desire to learn more about their culture. We encourage you to seek information and first-hand accounts from reputable sources. We must all strive to better educate ourselves and work to protect the heritage of all nations, peoples, and cultures.

— Board and Dice Team