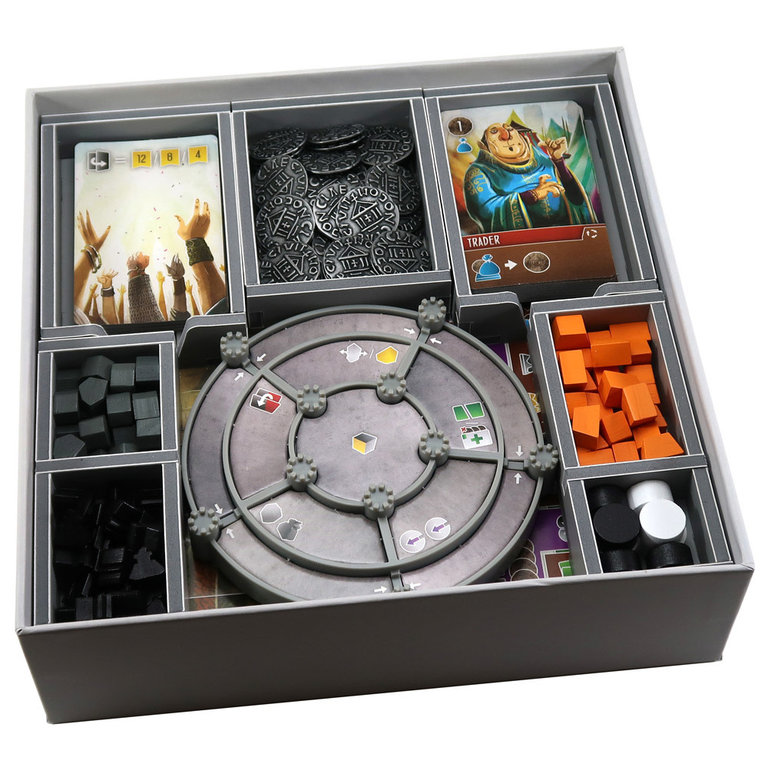 Insert for Viscounts of the West Kingdom

Insert compatible with Viscounts of the West Kingdom®. The design provides both efficient storage and improved game play. Many of the trays can be utilized during the game, and they greatly aid set-up and clear-away times.

The trays are arranged in two layers, where the viscounts pieces are placed underneath the castle, leaving two layers of trays that are separated by two of the player boards.

The insert includes one large tray for storing both large and small cards. In addition there are two regular sized trays for large cards. There is space for all cards to be sleeved with quality sleeves. There is one tray for each of the player piece colours, and two trays for the resources and round markers.

Note that the manuscript tiles do not have a tray, they are instead placed in-between the player piece trays resting on a sloped wall of the larger card tray. As these tiles are all placed directly on the board during setup they do not need a dedicated tray during game play.

The coin tray works equally well with either the card coins from the game, or the upgraded metal coins.

When packing the box, first place the remaining two player boards on top of the trays to cover them. Then place the rule book, followed by the main board segments. This fully fills the box and allows for vertical storage of the game.

Back to home
Renegade Game Studios

Viscounts of the West Kingdom

C$24.77
In stock
Article code 810011721265
Build the kingdom, defend its borders and increase your influence throughout the lands.

Quickview
Renegade Game Studios
The West Kingdom Tomesaga
Build the kingdom, defend its borders and increase your influence throughout the lands.
C$24.77
By using our website, you agree to the use of cookies. These cookies help us understand how customers arrive at and use our site and help us make improvements. Hide this message More on cookies »