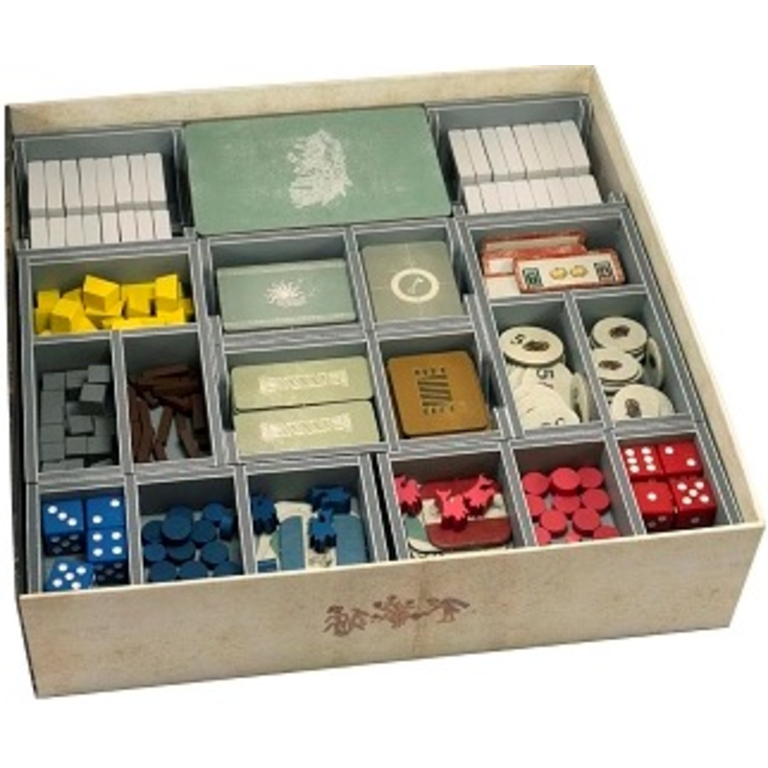 Insert for Teotihuacan and the Late Preclassic Period

Insert compatible with Teotihuacan® and the Late Preclassic Period® expansion. The design provides both efficient storage and improved game play. The trays can be utilised during the game, and they greatly aid set-up and clear-away times. The rules and boards act as a lid on top of the trays.

The insert is arranged in two layers. There are two trays for vertical storage of the pyramid tiles. Then two trays for the large tiles from the game: one for the technology and starting tiles, and one for the royal and season tiles. You have one tray for the wood, stone and gold, and an identical tray for the cocoa and teotibot tokens. There is a tray for neatly stacking the discovery tiles, and a fourth tray for the buildings, decoration tiles, and the temple bonus tiles. The two calendar discs go in the slot for the temple bonuses. There are trays for the player pieces. Each tray has three slots, one for the dice, one for the wooden discs, and a slot for the player token, the multiplier token, and the player order token. This third slot also stores the wooden worshipers from the expansion.

As mentioned above all the trays can be used during the game to organise the components and make access by all players easy. Using the trays in-game also makes clear-away times much quicker. The main game board placed first on top of the insert trays acting as a lid. Next goes the expansion board, followed lastly by the two rule books. Note that when fully loaded the box has a very small amount of lid-lift, which is between 1 and 2 mm.

Quickview
Board & Dice
Teotihuacan
Travel back in time to the greatest city in Mesoamerica...
C$64.95
Board & Dice

Quickview
Board & Dice
Teotihuacan: Late Preclassic Period Expansion
Teotihuacan is bustling with action!
C$47.95
By using our website, you agree to the use of cookies. These cookies help us understand how customers arrive at and use our site and help us make improvements. Hide this message More on cookies »