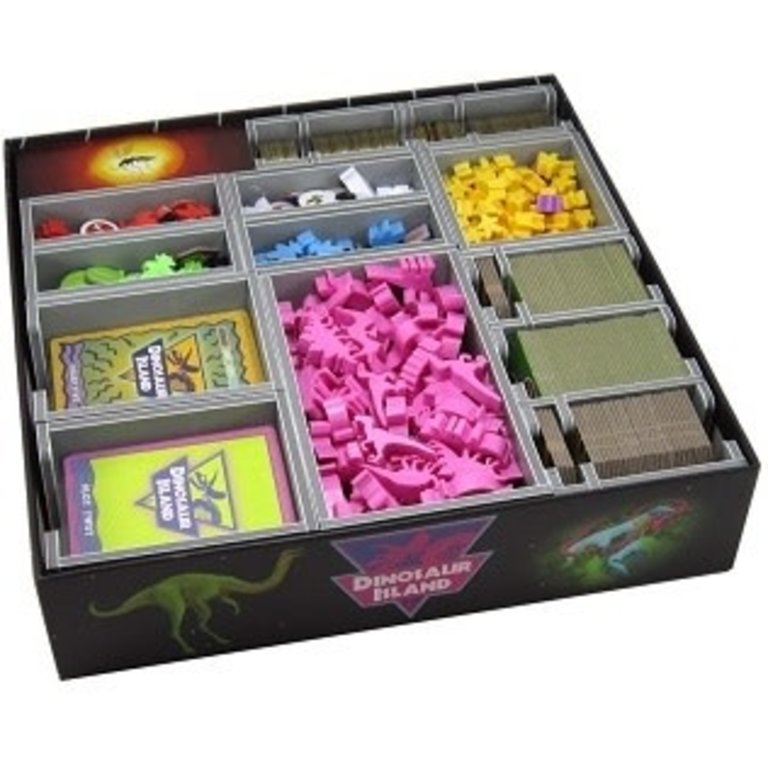 Insert compatible with Dinosaur Island Extreme Edition®. The design provides both efficient storage and improved game play. Many of the trays can be utilised during the game, and they greatly aid set-up and clear-away times. The rules and boards act as a lid on top of the trays.

This same insert also works with the Totally Liquid Extreme Edition® expansion, for which we have created a separate product page. If you own both sets you will need two inserts to store them.

The insert is in two layers just in one corner, you can see in the top right the bottom layer tray. Also note here how the dino recipe tiles are stacked in the other top corner, and that the player and game boards are on top of each other in the bottom of the box.

The two coin trays can be assembled in one of two ways: either for vertical storage of the metal coins or as a simple box for storing the card coins from the game. Note that if the metal coins are used there is not then another storage space for the card ones, and these would need to be kept elsewhere.

For this insert the game boards go on the bottom and the insert trays on top, as noted above. Once all trays are placed inside, next goes the rulebook. After this should go the visitor bag, with the knots from the string tucked into the spaces as shown. Lastly the fast pass wrist band is placed over the string. The box is then fully loaded, and the lid will close flush and the game can be stored vertically.

Back to home
Pandasaurus

C$69.95
In stock
Article code 854382007047
In Dinosaur Island, players will have to collect DNA, research the DNA sequences of extinct dinosaur species, and then combine the ancient DNA in the correct sequence to bring these prehistoric creatures back to life. Dino cooking! All players will compet

Quickview
Pandasaurus
Dinosaur Island
In Dinosaur Island, players will have to collect DNA, research the DNA sequences of extinct dinosaur species, and then combine the ancient DNA in the correct sequence to bring these prehistoric creatures back to life. Dino cooking! All players will compet
C$69.95
Pandasaurus

Quickview
Pandasaurus
Dinosaur Island: Totally Liquid! Expansion
Strap in and hold tight: Dinosaur Island is about to get radically wilder!
C$52.95
By using our website, you agree to the use of cookies. These cookies help us understand how customers arrive at and use our site and help us make improvements. Hide this message More on cookies »