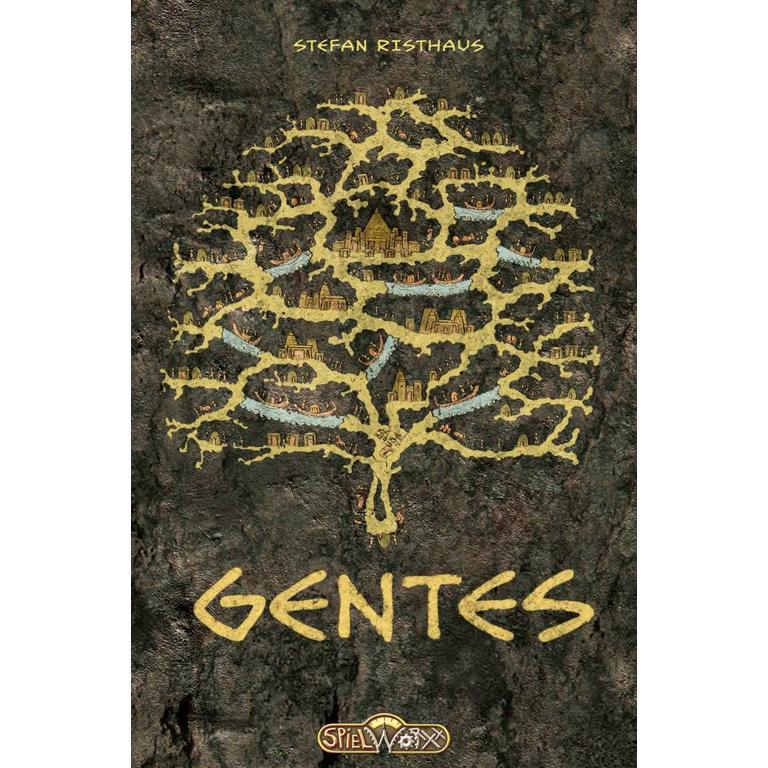 C$43.47
TMG
Out of stock
Article code TMG2028
Take on the role of an ancient people in the Mediterranean sea.
Share this product:

Gentes is an interesting civilization game with an innovative timing mechanism.

"Gentes" is the Latin plural word for greater groups of human beings (e.g., tribes, nations, people; singular: "gens"). In this game, players take the role of an ancient people who are attempting to develop by building monuments and colonizing or founding new cities in the Mediterranean sea.

The game is played in six rounds, each consisting of two phases: action phase, and tidying up. There are three eras — rounds 1-2, 3-4, 5-6 — with new monument cards entering the game at the beginning of rounds 1, 3 and 5. Each player has a personal player mat with a time track for action markers and sand timer markers. In the action phase of a round, the players take their turns in clockwise order, conducting one action per turn. Each action requires an action marker from the main board that is placed on the time track. Depending on the information on the action marker, you have to also pay some money or take sand timers that are placed on the time track. When you have no free spaces on your time track, you must pass for the remainder of the round. Therefore, the number of actions per player in a single round may vary significantly if, for example, you choose double sand timers instead of two single ones or take action markers that require more money but fewer sand timers. Single sand timers are dropped in the tidying up phase, while double sand timers are flipped to become single sand timer markers and stay for another round. The actions are:

To play a card, you must meet the requirements printed on that card, such as having specific persons on your personal board (e.g., two priests and four soldiers). These requirements are why training — i.e., getting specific people — is important, but that is not that easy because there are six different types of people — three on the left and three on the right side of your personal player board — and you have only six spaces in total for the two types in the same line. If you have three merchants, for example, you move your marker for counting merchants three spaces toward the side of the soldiers and thus you have only three spaces left for soldiers. By educating a fourth soldier and moving your soldier marker forward to its fourth space, you automatically lose one merchant because that marker is pushed back to its second space.

It is crucial to generate additional actions by using the specific functions of monuments in your display and cities you have built. Cities are expensive, but they create benefits at the end of each round or provide new options for taking an action without acquiring an action marker, gaining only a sand timer marker instead.

Try to have a steady income to avoid wasting actions to take money. Pay attention to the display of common cards, which is new in every single game, because the monument cards are shuffled randomly wihin the decks of eras I, II and III. Collect identical achievement symbols on the cards to benefit from the increasing victory points for a series of symbols. Build cities to enlarge your options!