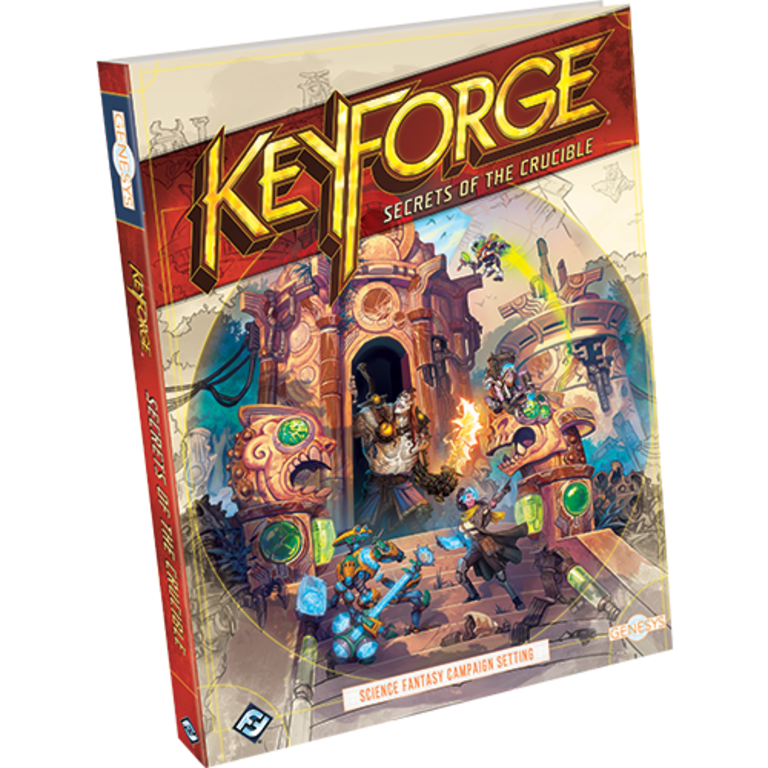 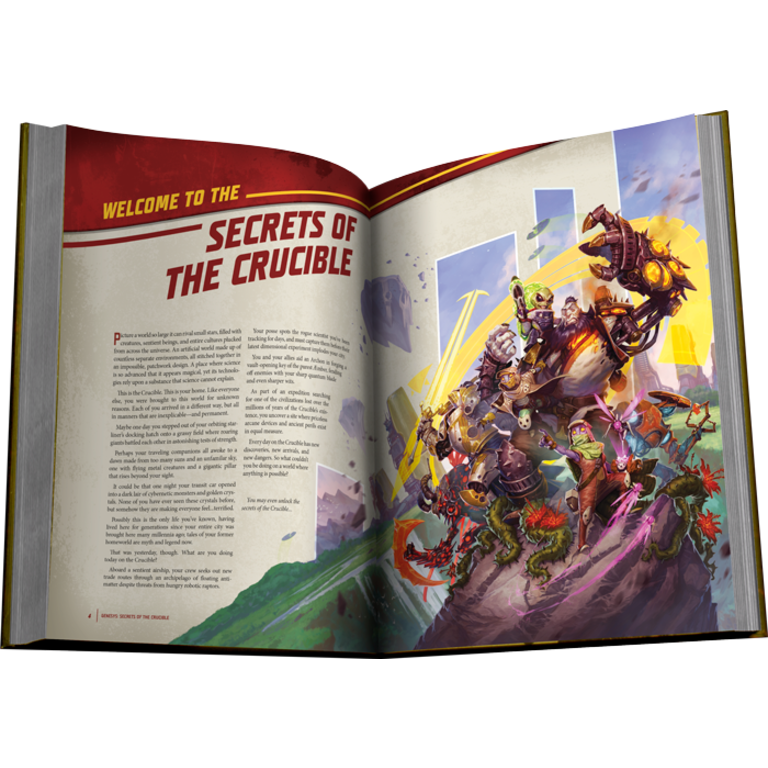 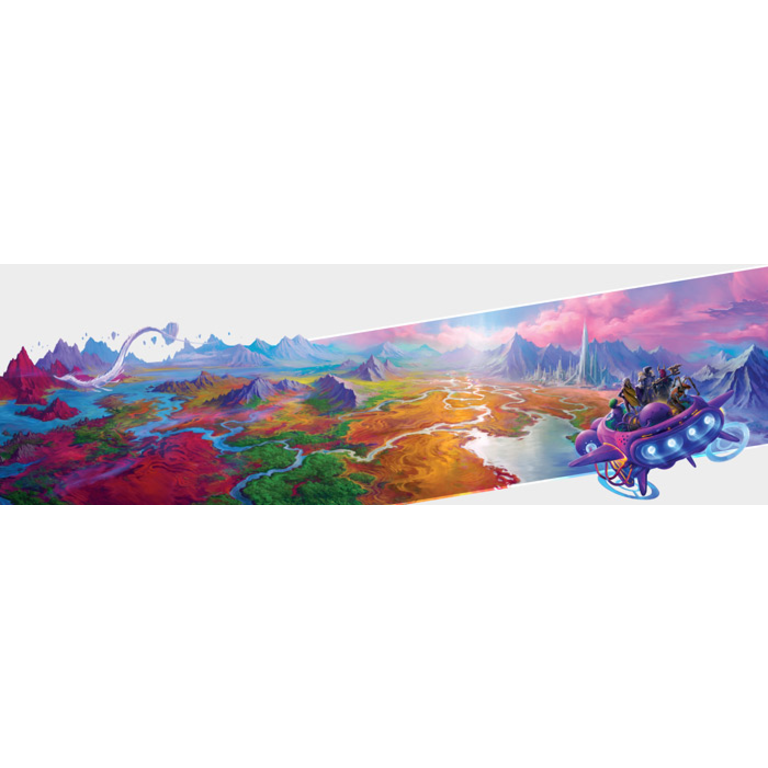 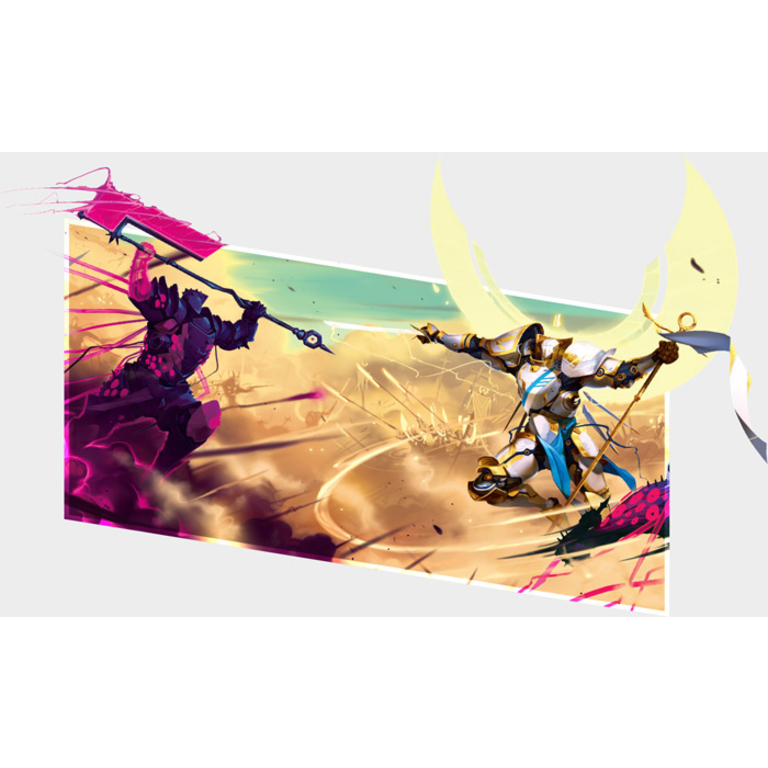 In the center of the universe hangs the Crucible, an enormous artificial world created by the enigmatic Architects and home to countless beings and cultures. Here, impossibly advanced technologies mix with arcane powers to make for a setting unlike any other. Uncovering the secrets of this mysterious, artificial world will take all your skills—but the possible rewards are boundless...

Fantasy Flight Games is proud to announce Secrets of the Crucible, a new sourcebook for the Genesys Roleplaying System set in the KeyForge Universe!

Secrets of the Crucible contains new character creation options, unique weapons and armor, new skills revolving around the mysterious Æmber permeating the world, bizzare adversaries, and a new adventure builder that puts all these aspects together!

Are you ready to discover a world where anything is possible?

The Keys of Discovery
The first portion of Secrets of the Crucible introduces new character creation options. The Crucible is a diverse landscape full of uncountable species. This book contains 11 of these species to choose from when creating a character, including Giants, Martians, and Robots. But Secrets of the Crucible also features a full set of rules for creating your own species, making your character creation options truly limitless! Traverse the land as an aquatic horse-type species or roll through the Crucible as a giant rock; the choice is always yours!

Of course, selecting a species is just the beginning, Secrets of the Crucible also contains a set of fresh new careers for players to explore. Battle for æmber and glory as a mighty VaultWarrior, or acquire wealth and fortune as a mercurial Trader! Each of these careers has access to a wide variety of new skills and talents introduced in Secrets of the Crucible, including the powerful new Æmbercraft skill, which invites you to learn the secrets of the mysterious substance permeating the Crucible.

Of course, you're characters history and future will inevitably be intertwined with the various factions of the Crucible. Given the enormous number of beings on the Crucible, it is no wonder there are untold millions of groups, factions, houses, associations, and other ways for them to band together. Referred to as organizations, these groups range from congregations of belief systems followed by thousands of species to a singularly immortal hive mind linking a multitude of small protoplasmic blobs. Wherever there are beings who share beliefs or desires, organizations are formed. Does your character hail from the fierce legions of Brobnar, or from the scientific minds of Logos? As always, your character is yours to craft.

Master of the Vault
But Secrets of the Crucible isn’t for players alone. Game Masters are offered plenty of advice for running adventures in the world of KeyForge! Games set on the Crucible can be as divergent and expansive as the world itself, and it may feel a bit daunting to craft adventures. The wild mix of species, super-science, and fantastical technologies may seem too large to handle, but its beings have motivations and needs that everyone can understand—and thus adventures on this world can be both fun and familiar for players as they explore the Crucible with their characters.

Much of the chapter focusing on the Game Master is devoted to exploring the Science Fantasy genre, depicting life on the Crucible, Introducing NPC templates, and working Æmber into your adventures. The rest of the chapter offers a way for you to quickly create adventures featuring prominent or common elements of the Crucible with an adventure builder template. The adventure builder uses a modular format, allowing segments of the adventure types to be reused to create different combinations each time. The resulting framework may include unexpected twists, moral quandaries, and some of the general weirdness inherent to the Crucible.

These modular adventures are similar to the encounters found in Shadow of the Beanstalk, but with a Crucible twist. The adventure builder contains three categories: Hooks, Escalations, and Climaxes. By combining one of each, you can create your own story full of adventure, twists, and a satisfying conclusion.

Hooks are the initial enticement and incentive for your players to get involved in the adventure. These work best when they are clearly presented, so the players don’t spend a lot of time wondering what the possibilities are. Hooks can be quite cliché, which is great for telegraphing the basic intent of the adventure and can help set up unexpected events later on. Perhaps an Æmber Hunter needs you to fight off a Martian scouting party, or the PCs find a hot lead on a valuable artifact.

An escalation raises the stakes or difficulty of the adventure. Sometimes it challenges the morality of the situation as the PCs decide how far to go in their pursuit of their ultimate goal in changing conditions.

Climaxes are more open and nebulous compared to the hooks and escalations. They represent broad categories of possible resolutions that can always be greatly impacted and even circumvented by PC actions.