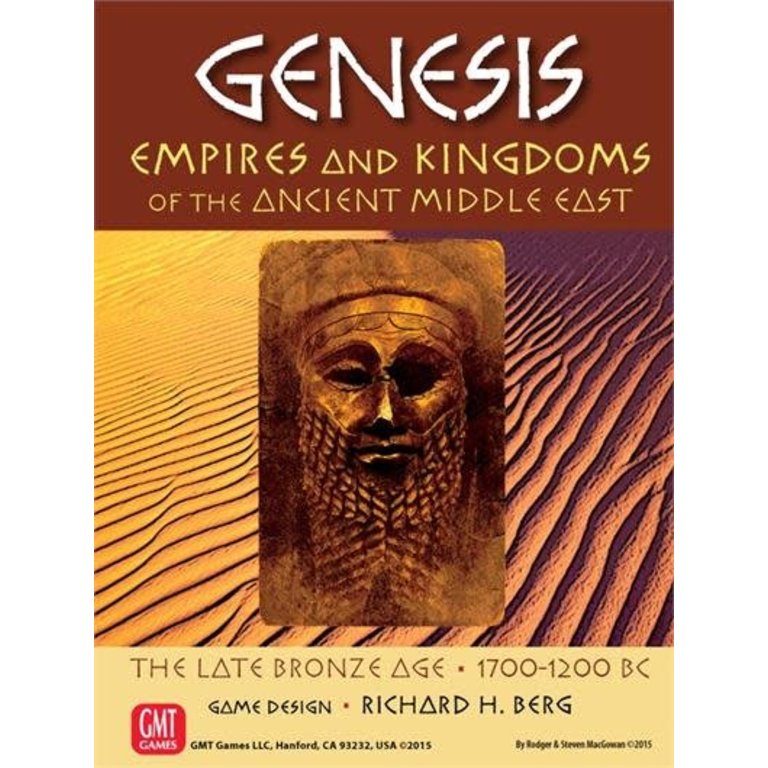 Genesis: Empires and Kingdoms of the Ancient Middle East

This is a special order item please inquire by email if you are interested.

Genesis is a campaign-level game covering the turbulent Late Bronze Age in the Middle East, where kingdoms rose and fell while establishing many of the systems and ways of life that underwrite Western Civilization. Much like its ancestor game, Pax Romana, Genesis is a game that provides the players with the historical dramatis personae and allows them to forge their own empires. It also has a great emphasis on the control of the important trade routes and commercial centers and the building of the spectacular monuments these civilizations left for posterity and wonder.

All the high-points of this era are included: lots of gods that have major effect on play (Astarte, Baal, Dagon, Marduk, et al), the rise of chariot warfare, pasants, slaves, and a host of historical kings: Thutmose, Akhenaten, Suppiluliuma, Mullatawi, Tushratta, Hammurabi, Agum III, Shalmanaser, Shamsi-Adad , and many more. . . even Sargon the Great (the worlds first great conqueror (2270-2215 BCE) along with Sea Peoples, independent kingdoms (Canaanites, Arzawans), pirates, and guys with great beards

There are several two-player scenarios for short-time play, an introductory scenario to get you into the system (featuring Sargon), and the big, 5-player multi, included all the major players Egypt, The Hittites, the Mitanni, Assyria and Babylon - more color than a Crayola Factory and more fun chrome than a 57 Chevy. The main scenario can also be played with 3 or 4 players.

Of course, there are the cards (the game is not card-driven but card-augmented), such as:

The Begat Effect: Independent Expansion (2): The card player may move a Peasant unit from a friendly City space to any unoccupied independent City space within 4 spaces of where that Peasant starts. This card may be held in Hand until played.

Baal (2): Its Time to Pay Baal and all those priests running those temples. For every Monument he has in a Home Kingdom City, the card player must pay 2$. If he cannot pay, the player must remove the Monuments that he cannot pay for.

The Akhenaten Effect: If you are Egypt and your Pharaoh/King is Akhenaten, you do not pay anything; you simply remove all Monuments in your Home Kingdom cities. This card must be played when drawn.