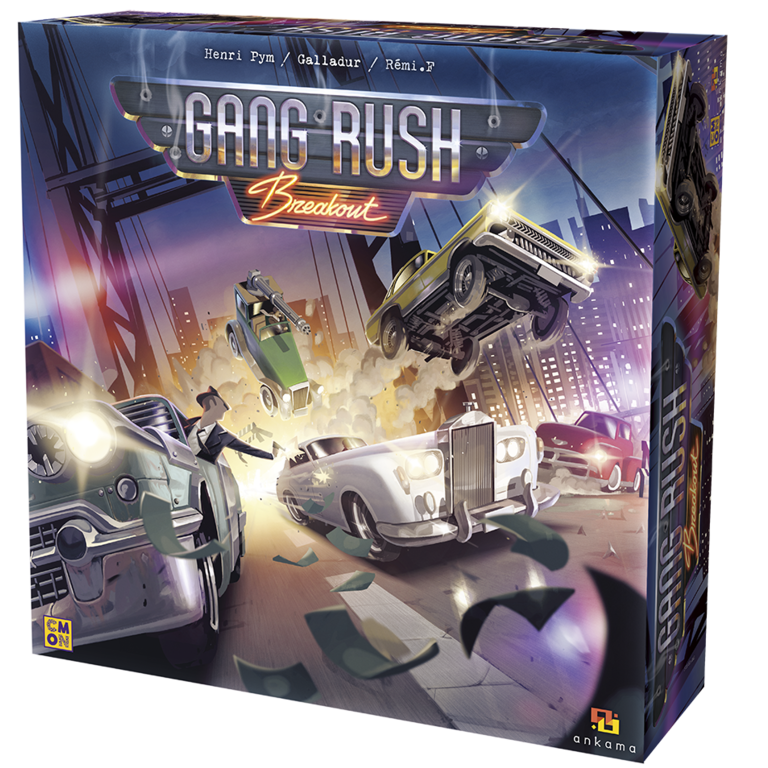 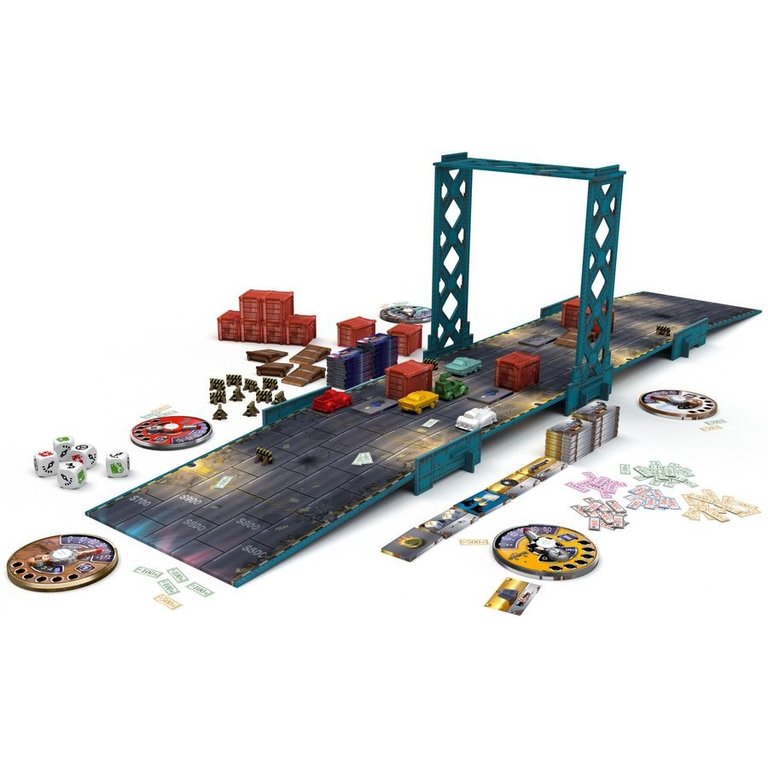 In Gang Rush: Breakout, you take on the role of organized crime members, speeding over a bridge in order to deliver money to the boss on the other side. Along the way, you attack your competition to try and get them to drop bundles of cash or to ram them into obstacles, slowing them down. The bridge is filled with barriers as well, giving plenty of opportunities to crash… unless you utilize a ramp to jump over them. As if that wasn't hectic enough, the cops are also out there, looking to haul you in. If you can make it to the other side of the bridge with the most money, you’re the winner, assuming you didn’t cross the finish line last.

All the action takes place on a unique 3D bridge game board. The raised surface, as well as the cross-beams create a realistic atmosphere, as though you’re trying to get out of an industrial city to deliver the cash to the crime boss in his fancy home just outside of town. The containers, ramps, barriers, and cars are also 3D pieces, giving the game a visually captivating look.

On your turn, you roll your five dice to determine what actions you’re able to take. Dice can be re-rolled up to two times. Each face represents a different action, allowing you to steer your car into another lane, speed up or slow down, repair damage, or deal out damage to opponents’ cars. Getting the right rolls and making calculated, split-second decisions is the key to victory. Remember, going fast is great to get to the other side of the bridge, but it leaves less time to react to what might be coming down the road. The faster a car is going, the less maneuverable it’ll be when that obstacle starts racing towards you. To keep track of your speed and the condition of your car, you use special dashboards. They have gauges to indicate how fast your car is going, how maneuverable your car is at that speed, and how much damage you’ve taken.

Each car also has a different special ability that you can utilize over the course of the game. For example, Pupetta’s reinforced truck doesn’t suffer damage when she uses it to ram enemy cars, while Clyde Parker’s turret-mounted gun lets him shoot opponents in all directions. Dealing damage to enemy cars forces them to drop money, allowing you to swoop in and pick it up. And while you’re trying to collect cash, sometimes you have to spend money to make money. You can buy upgrades that can have a one-time bonus or permanent boost to their vehicle. Should a car run off the road and into the drink, they’ll have to pay the crane operator to get them back out again, costing them valuable time.

So grab your stacks of cash, load up your weapons, and put the pedal to the metal. It’s a rough and tumble world in organized crime, and the boss is still waiting for his money.