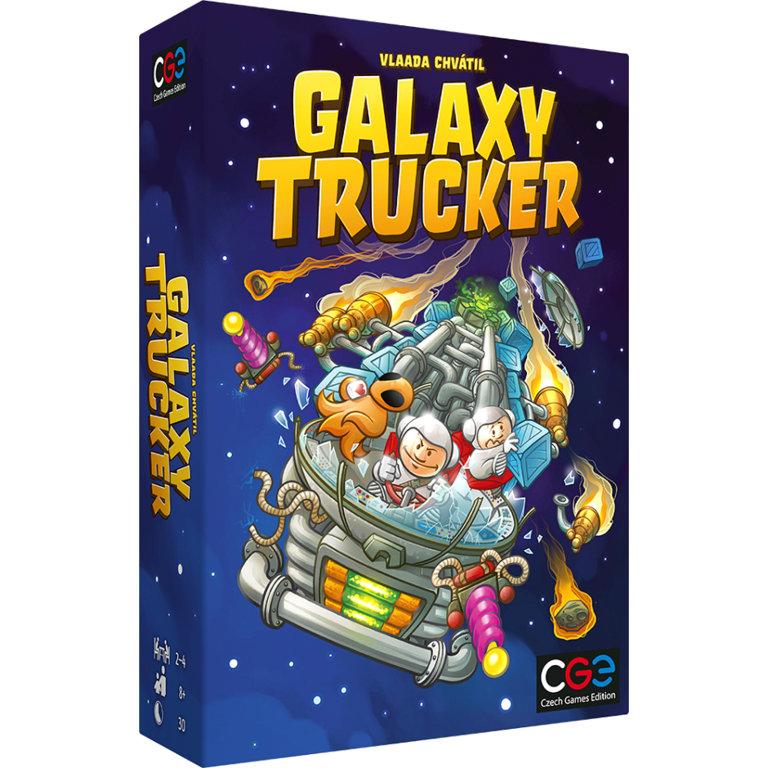 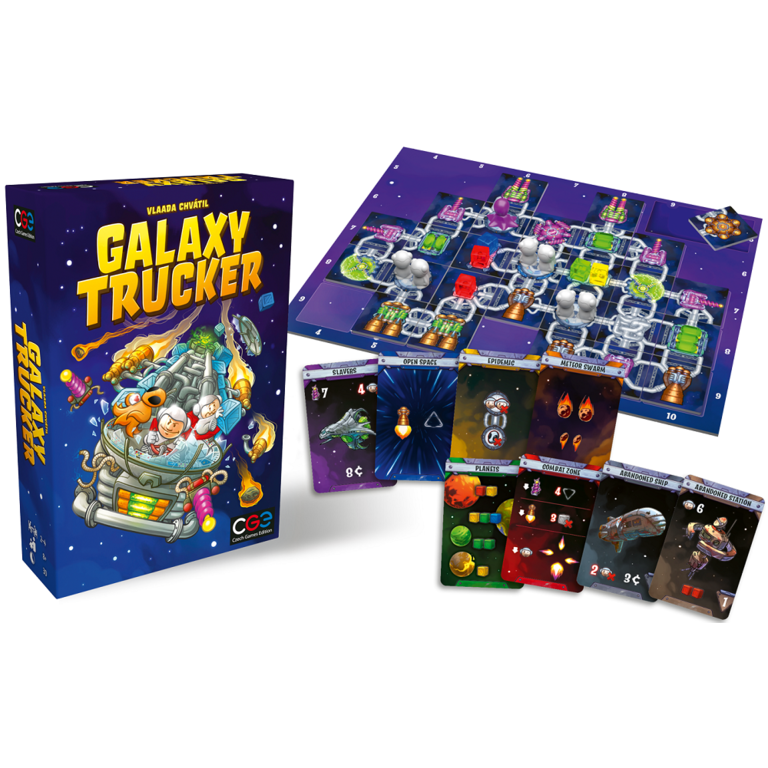 C$41.95
Czech Games Edition
In stock
Article code 8594156310615
The ageless classic has relaunched! It's modernized, faster, more accessible, and just as fun as ever!
Share this product:

Build a space ship and fly across the Galaxy. Transport goods. Fight pirates. Dodge meteors. Watch fellow players' ships explode as you fly on to victory! Load up for an intense, humor-filled haul with Galaxy Trucker. It's an absolute blast!

In this fast and goofy family game, 2 to 4 players begin by simultaneously rummaging through the common warehouse, frantically trying to grab the most useful component tiles for building their space ship—all in real-time.

Once the ships are launched, players will encounter dangerous situations, while vying for financial opportunities—each hoping to gain the most valuable cargo and finish with as much of their ship still intact as possible.

Of course, that's easier said than done, since many hazards will comically send pieces of your ship, your cargo, and your crew hurling into the depths of space.

The goal is to have the most credits at the end of the game. Players earn credits by delivering goods, defeating pirates, having the best looking ship, and reaching their destination before the others.

Back to home
Mayday Games

C$68.95
In stock
Article code DNR-8594156310011
Corporation Incorporated is looking for can-do guys and gals to haul materials to remote regions of the galaxy.

C$92.95
In stock
Article code 024144301311
Corporation Incorporated brought in The Broken Token to help with the official game crate for Galaxy Trucker by CGE.

C$63.95
In stock
Article code 8594156310592
On an uninhabited island in uncharted seas, explorers have found traces of a great civilization. Now you will lead an expedition to explore the island, find lost artifacts, and face fearsome guardians, all in a quest to learn the island's secrets.

Quickview
Czech Games Edition
Lost Ruins of Arnak
On an uninhabited island in uncharted seas, explorers have found traces of a great civilization. Now you will lead an expedition to explore the island, find lost artifacts, and face fearsome guardians, all in a quest to learn the island's secrets.
C$63.95
Czech Games Edition

Quickview
Czech Games Edition
**PRE-ORDER**Galaxy Trucker Keep On Trucking
Arriving September 15, 2022
C$21.97
By using our website, you agree to the use of cookies. These cookies help us understand how customers arrive at and use our site and help us make improvements. Hide this message More on cookies »