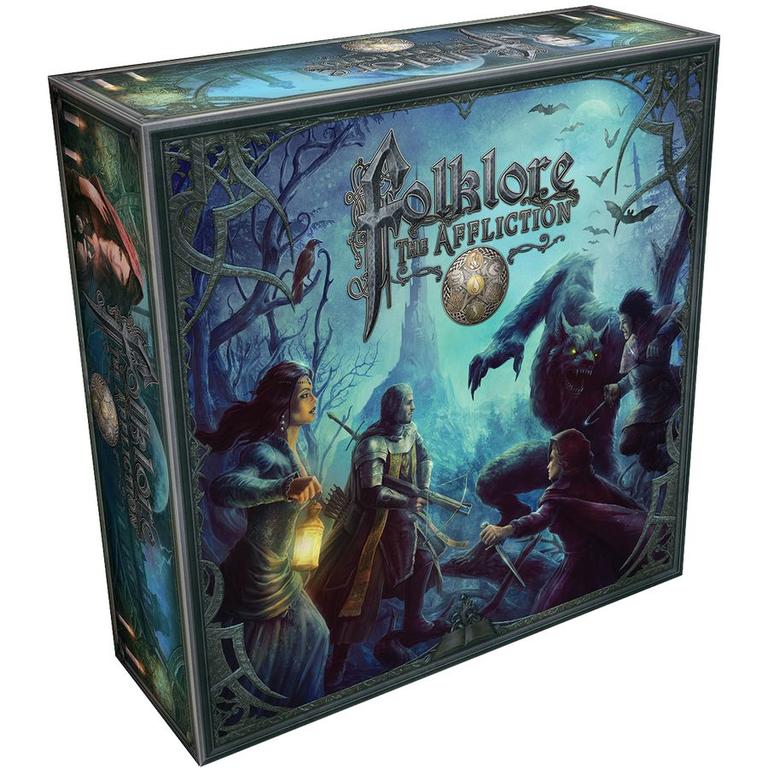 C$82.95
Greenbrier Games
In stock
Article code 602573040331
This is Folklore, an adventure board game like you’ve never seen before.
Share this product:

This is Folklore, an adventure board game like you’ve never seen before with over 5 years of development. Play one of 6 characters in a 1-5 player game that requires no game master. It is set in our own past, where characters acquire Lore as they face and defeat the malign and supernatural forces known as Afflictions. Explore the countryside amidst winding mountain passes and overgrown trails…down the halls of opulent manors and ancient castles and through dark and deep places, you are on a quest to uncover the Lore which binds the evils to our world and lets them pass unchallenged. You play one whose destiny is linked to hunting down those things which brought terror to our people, those things which led them to change their culture, spread salt on their doorsteps and hang garlic in their windowsills. Folklore: the Affliction is a highly immersive board game of epic scale and expandability. Multi-layer Character development and player interaction spearheads this collaborative ongoing adventure in a quest to drive the darkness back into the hell from which it came.

Travel the countryside of the old world. Move from towns and farms to objective locations in your hunt for Lore and your quest for liberation of the people from the plagues that haunt them. Gather up your Lore to acquire abilities and to power artifacts long forgotten. Travel to places in search of clues and combat your enemies in a struggle for the safety of man. Move into adventure locations and use your miniature to traverse the boards to explore, uncover mystery and stake a sleeping vampire in its coffin!

Intense story telling and combat action that pits you against your most frightening foes with strategy building both on and off the battlefield , resource management, power consumption and item creation that makes Folklore: the Affliction an experience you wont forget. You’ve never seen it like this…you’ve never played it like this—with top notch story design, attention to detail, art that brings you into the adventure and into your character. We haven’t spared any expense over the past 5 years on design and playtesting to bring you the game we always wanted to play. This is a game made by lifelong gamers who love the best of RPGs and adventure board games as well as strategy and player interaction. Continue to visit our website as the Kickstarter funds for source material and even more downloadable content as well as updates and a place to post your home-grown adventures, items and creatures for others to play with. We encourage fan creativity and would love to see your imaginations build the world of Folklore. Look for a contest to help us build our world with your ideas.

Each character has their own skills and sets of unique abilities to acquire and master in their rise towards dominance in the war against evil. Each has a distinctive depth and feel with nearly 100 abilities and endless re-playability. Folklore is as much about character development, storyline and immersion as it is exploration and combat. Engage in making your character more alive than any other board game as your choices guide your destiny and the path of your companions.

Each Affliction is known by name and is a paragon of power and a threat to the countryside. Every adventure focuses around the blight caused by types of Afflictions whether they be Mortal, Shapeshifter, Undead, Spirit, Occultist, Demonic or Nature foes. Many creatures plague the people and the land, those whose strengths are unique among them are called Afflictions.

Please note: this is the standard retail edition, and as such comes with cardboard standees, not miniatures.

Back to home
Greenbrier Games

out of stock
Quickview
Greenbrier Games
Folklore - The Affliction: World Events Card Pack
C$17.95
By using our website, you agree to the use of cookies. These cookies help us understand how customers arrive at and use our site and help us make improvements. Hide this message More on cookies »