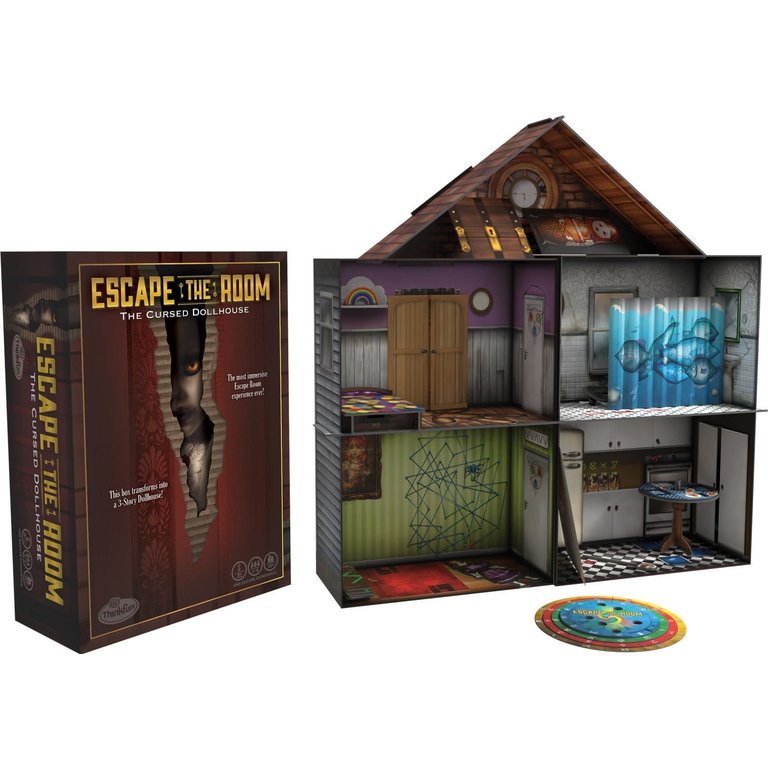 Escape The Room: The Cursed Dollhouse

C$59.95
Thinkfun Games
In stock
Article code 019275073534
Build and explore a mysterious three-dimensional dollhouse complete with 3D furniture, solving puzzles in search of a way to escape. Five rooms, each containing objects to investigate and multiple puzzles to solve, will keep players engaged through two ho
Share this product:
A Party Event for Gatherings of 1-4
The Mystery: Ever since his young daughter went missing, old Mr. Garrity has become a recluse. He boarded up his windows and doors, and refused to talk to anyone. Now the only time that anyone sees Mr. Garrity leave his house is when he crosses his overgrown yard going to and from his work shed. You don't know what he's doing out in that shed, but he spends a lot of time locked inside, sometimes working late into the night.

Recently there have been new disappearances; other local children have gone missing. And you've noticed strange lights in that shed of Mr.Garrity's; you know he must have something to do with it.

One night you decide to break in. Inside you find a dollhouse glowing eerily from the middle of the shed. It calls to you, and ignoring your instincts, you move toward it....

The Objective: Build and explore a mysterious three-dimensional dollhouse complete with 3D furniture, solving puzzles in search of a way to escape. Five rooms, each containing objects to investigate and multiple puzzles to solve, will keep players engaged through two hours of play.

Exit: The Catacombs of Horror (Double-Sized Exit Game) **In-Store Only**

Exit: The House of Riddles **In-Store Only**

Quickview
Thames and Kosmos
Exit: The Haunted Roller Coaster
Fancy a ride at the fair on the ghost train? Of course — but what if this ride suddenly stops and you become trapped in the scenery?
C$10.87
Thames and Kosmos

Exit: The Enchanted Forest **In-Store Only**

Exit: The Cemetery of the Knight **In-Store Only**

Exit: The Stormy Flight **In-Store Only**

Exit: Theft on the Mississippi **In-Store Only**

Quickview
Thames and Kosmos
Exit: Theft on the Mississippi **In-Store Only**
You’re a team of investigators, traveling the Mississippi on a paddle-wheel steamboat in 1872.  Last night there was a robbery
C$10.87
By using our website, you agree to the use of cookies. These cookies help us understand how customers arrive at and use our site and help us make improvements. Hide this message More on cookies »