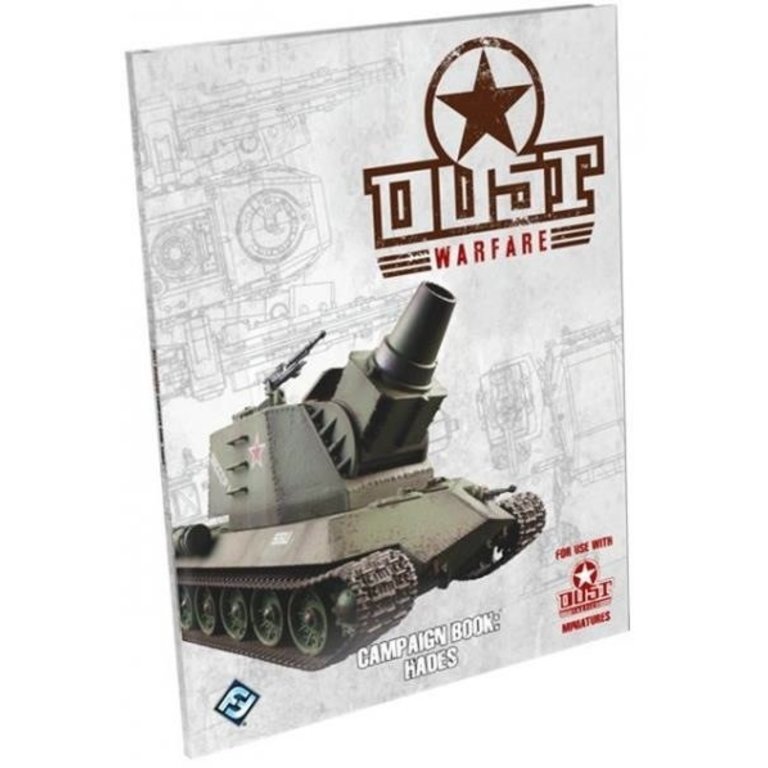 In a frozen urban wasteland, the great powers fight on!

As 1947 rages on, the once-proud city of Zverograd has become a bloody cauldron of battle. Its buildings have become strongholds, its Metro a heavily-contested bomb shelter, and its streets firing lanes for the three armies struggling to control a long-buried secret. All three factions must marshal their troops carefully, for one misstep could tip the balance and cost them the war.

New advanced Axis walkers and heavy weapons teams arrive to buttress the invaders, as Allied commandos struggle to secure their tenuous beachhead. Meanwhile, the SSU musters a powerful armored force to relieve the besieged city, bolstered by peerless defenders of the Revolution - the elite Red Guards.

Dust Warfare is a miniatures game for two players set in Paolo Parente's alternate history of the Second World War. With this Campaign book, players can field new units, upgrade units with improved equipment and abilities, and experience a complete, multi-player campaign system that will determine Zverograd's fate.

This book provides additional rules for playing out battles with Dust miniatures. A copy of the Dust Warfare Core Rulebook is Required.

C$21.95 C$5.49
In stock
Article code DNR-9781616614447
Inside this book, commanders will find a description of the SSUs history, a platoon list to compose SSU armies, and rules for an exciting campaign

-75%
Quickview
Fantasy Flight Games
Dust Tactics Dust Warfare Zverograd Campaign Book
Inside this book, commanders will find a description of the SSUs history, a platoon list to compose SSU armies, and rules for an exciting campaign
C$21.95 C$5.49
By using our website, you agree to the use of cookies. These cookies help us understand how customers arrive at and use our site and help us make improvements. Hide this message More on cookies »