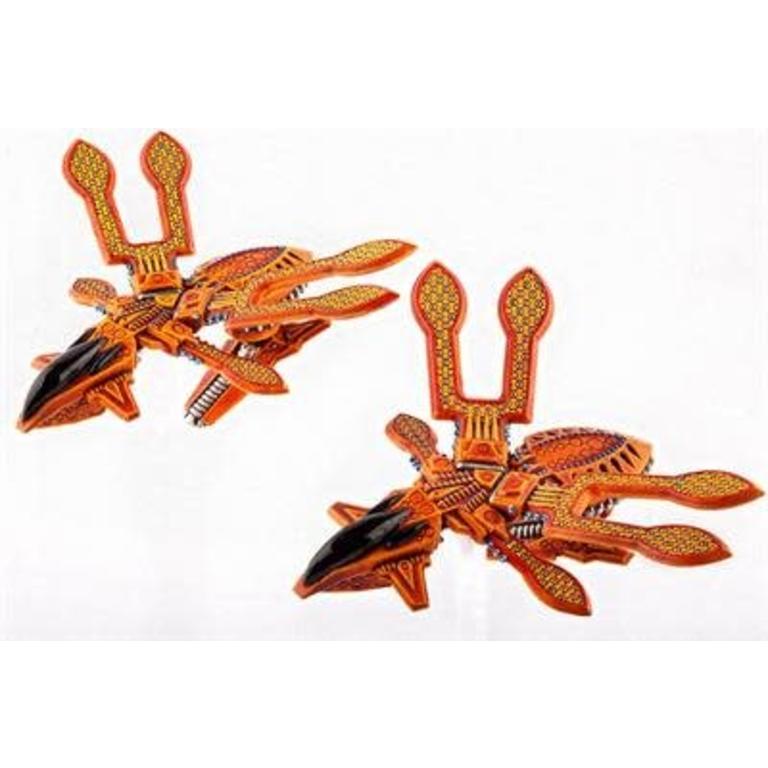 C$24.95
Dropzone Commander
In stock
Article code 740781772214
Share this product:
The Thunderbird is a lethal gunship, dedicated to the ground attack role. Its highly distinctive silhouette is reminiscent of stinging insects, an eminently suitable comparison. The Tunderbird features a deadly sting in the form of a short barrel Gauss Cannon, mounted beneath its abdomen. This weapon does not quite match the range of the standard version, but features the same excellent killing power.

The Thunderbird can loiter for extended periods over the combat zone, providing excellent close air support. Although it is thoroughly outclassed by fighters in terms of speed, this ability makes it more useful for protracted engagements. It is also more flexible in the confines of the urban jungle, where fighters have insufficient room to manoeuvre.

Since Gates are entirely unarmed, these talents are highly prized by Shaltari Warchiefs. Thunderbirds are routinely employed as escorts for Gates, clearing dropzones ahead of troop insertion. However, its light armour and low speed fight envelope makes it highly vulnerable to AA fire, and as such it is best deployed where the enemy has poor air defence.

Thunderbird Gunships shares blister with Firebird Gunships Two models per blister
10mm Scale
Length: 46mm
Wingspan: 53mm
4 Resin Components each
Supplied with 2x 30mm polished clear acrylic flying bases
Models supplied unassembled and unpainted
By using our website, you agree to the use of cookies. These cookies help us understand how customers arrive at and use our site and help us make improvements. Hide this message More on cookies »