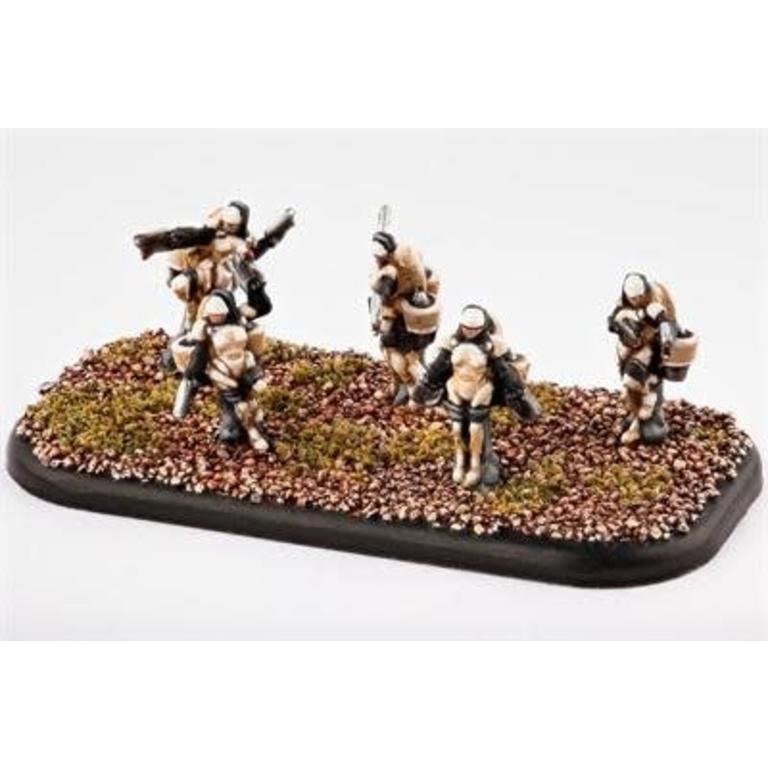 C$21.95
Dropzone Commander
Out of stock
Article code 740781772047
Share this product:
The Siren Corps is an elite group of women, capable of utilising the multiple viewpoints of their weapons and their superior training to deadly effect. The ability to make the grade is rare however, owing as much to genetic makeup as it does to personal ability and mind-set. Hundreds of PHR warrior women do not make the grade, yet are highly trained and implanted with top level military modifications. This enhanced dexterity and athleticism is used by PHR forces in the form of Valkyrie squads.

Valkyries use personal jump-jet booster packs to travel at speed across the battlefield, dodging and weaving through enemy fire before descending to unleash hails of submachine gun bullets on the foe. Retaining the mods and much of the training from Siren testing, they are nimble enough to escape all but the most masterful attacks, and the added manoeuvrability of their jump packs means that they can get to where the fighting is thickest quickly before cutting down the enemy with ruthless efficiency. Much like their mythical namesake, a Valkarie is often the thing the foe sees before they go to their afterlife.Rules for the unit can be found in Reconquest: Phase 2

Contents:
Four 5-figure stands per blister
10mm Scale
20 white metal figures
Supplied with four 45mm x 22mm bases
Models supplied unassembled and unpainted
By using our website, you agree to the use of cookies. These cookies help us understand how customers arrive at and use our site and help us make improvements. Hide this message More on cookies »