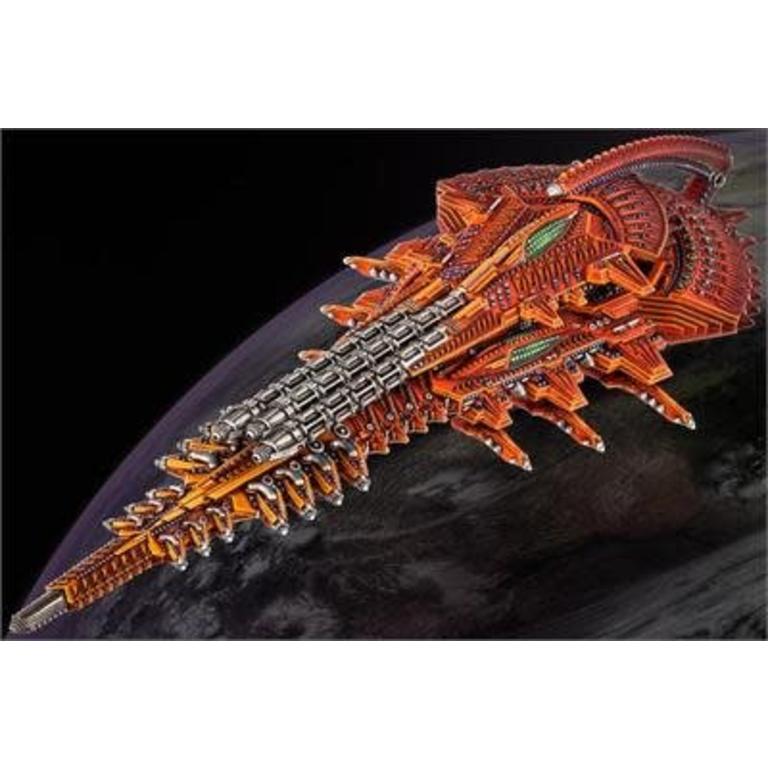 C$59.95
Dropfleet Commander
In stock
Article code 740781772368
Share this product:
This blister pack can be assembled as either a Diamond class battleship or Platinum class supercarrier. It features awesome interior detail of the flight deck, visible from the outside if assembled as the Platinum class. It is cast in exceptionally tough impact resistant resin and features extraordinary detail. 1:9150 (0.2mm) scale.

The Diamond Class battleship is a truly frightening spectacle. Stretching 1546 meters in length, this mighty vessel is one of the largest known battleships and an imposing figurehead for any fleet. Despite their rarity, more UCMF officers ranking Admiral or above have met their deaths at the hands of one of these leviathans than any other type of ship in the Reconquest. In addition to a pair of disintegrator banks, the Diamonds primary armament is a triad of super particle lances. These vast weapons extend through half the ships entire length and are fixed in the forward arc, such is their unknowable mass. These monstrosities have the ability to scythe through any armour like butter, their beams frequently passing right through a capital ship. While their damage dealing ability is potent, their real strength lies in reliability the certainty that the enemy will feel the Diamonds wrath, no matter how well protected it is.

The Platinum Class shares the same basic hull design as the Diamond class, but its internal space and vast upper levels are dominated by an enormous flight deck, making this vessel a supercarrier by UCM reckoning. The Platinum class can unleash swarms of fighters and bombers in an unstoppable tide of destruction, in volumes and quality that few other ships can match. In addition (and like its cousin the Diamond) it also serves the secondary function of mothership, carrying a small number of ground troops to supplement surface landings. Their continued survival over the millennia is due in part to their scale, but mostly to the extended combat range granted by its strike craft, ensuring that finally ending one of these behemoths is a challenging task in the extreme.