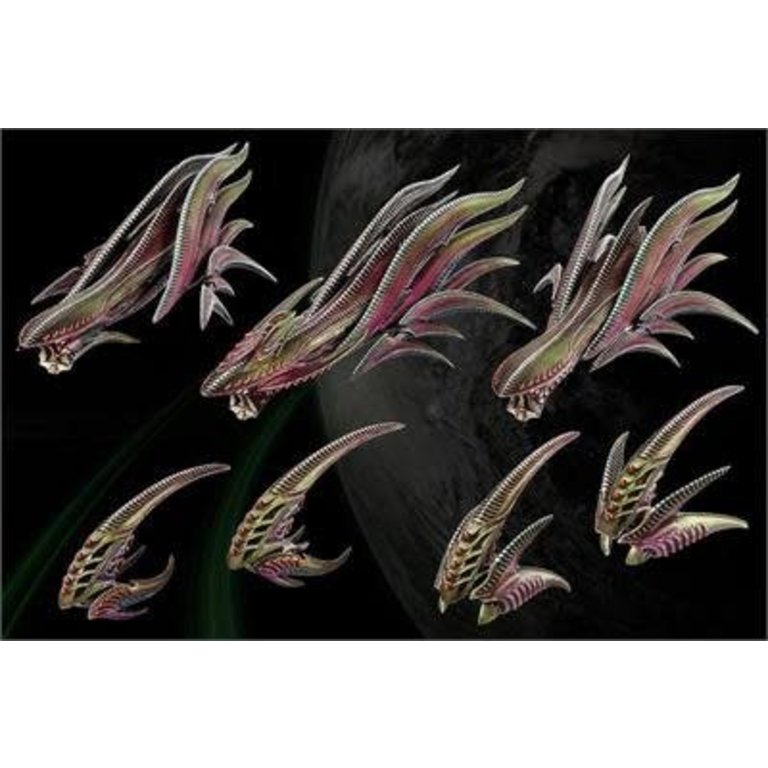 C$79.95
Dropfleet Commander
In stock
Article code 740781772290
Share this product:
The Scourge are foul, neuro-parasitic lifeforms which can utterly dominate an unfortunate host, bending its life to its will. They thrive on the conquest and absorption of other races, their very mode of existence as potent a threat as their formidable vessels. They are the galaxy's ultimate predators.

Their breathtaking assimilation of the central planets, including Earth itself, has made them the primary threat to the very existence of mankind. The sheer lethality of their biomechanical ships is abhorrent to witness, but violent death at the hand of their potent weaponry can be as nothing compared to the dread of being taken alive.

The Scourge fleet is a potent killing machine focused on raining brutal destruction, frequently at close range. Their ships offer superior speed at the expense of survivability, demanding aggression and cunning savagery from their admiral.

This boxed set is the perfect way to get started with a Scourge fleet or add to an existing one, since it can be configured to almost any requirement!

4x Scourge Frigates: These multi-part hard plastic lavishly detailed 1:9150 (0.2mm) scale miniatures can be assembled as up to five different classes, including frigates and strike carriers. Typical length 58mm. 24 Parts for all four ships (including optional ones).

NOTE: All ships are provided with a multi-part Dropfleet flight stand, designed to track in-game status without the use of tokens. Miniatures supplied unassembled and unpainted.