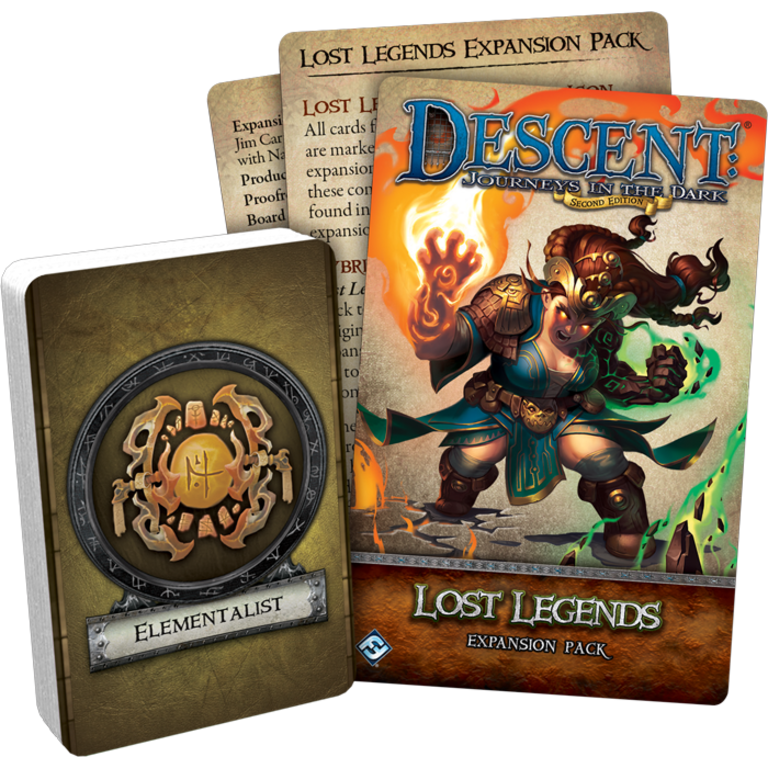 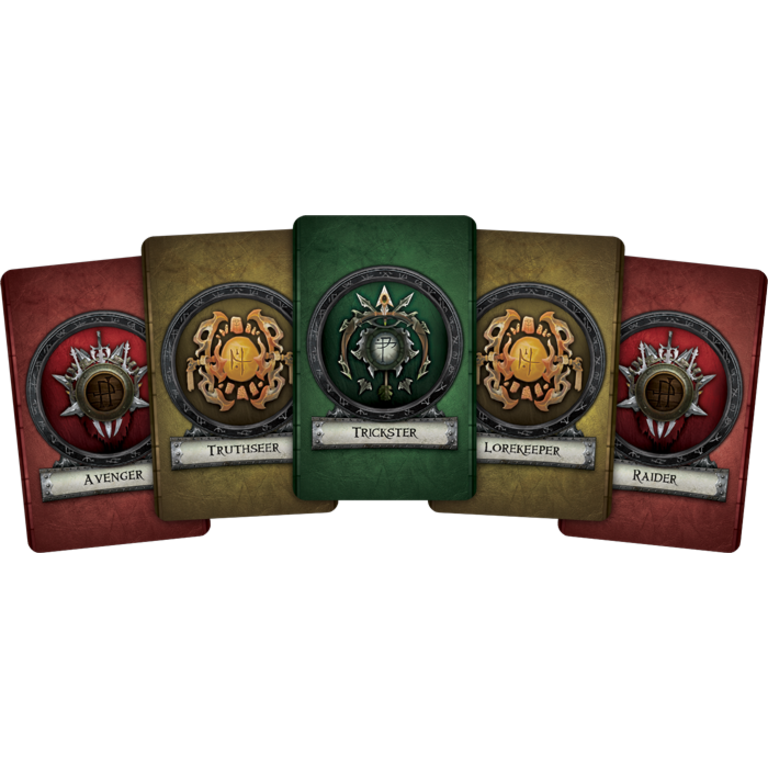 The heroes of Terrinoth take on many shapes and sizes. From stoic warriors leading the charge to powerful mages harnessing the power of rune shards to conjure powerful magics and defeat their foes. Your adventures in Descent: Journeys in the Dark have seen you embody a myriad of different classes, and now even more choices await!

Lost Legends includes new class options for players venturing into the dark, including two new standard classes and eight new hybrid classes, opening up hundreds of new hero and class combinations for you to discover as you continue your adventures in Terrinoth!

The Essence of Life and Death

Lost Legends adds ancient techniques, long forgotten in the realm of Terrinoth, to your hero's toolset. This includes the enigmatic new Healer class, the Soul Reaper.

The Soul Reaper is an expert at taking the essence of death and transforming it into a powerful ally. At the very beginning of your journey into the mysteries of this class, when any monster is defeated, you may place one damage token on  Essence Harvest,  representing the very lifeforce of that monster. The Soul Reaper can then use this essence as a powerful currency in your fight against the darkness.

For example, Stream of Life allows you to discard up to four essence from Essence Harvest to help a nearby hero recover that much health, transforming this life essence into a healing salve. As a part of the Healer archetype, many of the Soul Reaper’s class cards focus on trading essence for health.

But in order to gain this essence, a trade must be enacted, and the Soul Reaper must assist in slaying the monsters that fuel their magic. The Harvester Scythe is the starting weapon of the Soul Reaper, and it allows you to recover your own health whenever you defeat a monster with this weapon. Stocking up on health and essence is a powerful combination, and it  will behoove your heroes to let the Soul Reaper get the finishing blow on monsters that stand in your path.

Through hard-earned experience, you can even learn to harness the power of essence to snatch victory from the jaws of defeat. Spirit Link not only provides a boost of essence at the start of an encounter, it also gives you the opportunity to save an ally from being knocked out, potentially restoring the majority of their health. With a Spirit Link on the field, your team of heroes can turn certain defeat into a mighty victory through the power of essence.

As you grow in your role as a Soul Reaper, you may even find yourself mastering the Font of Vitality,  dramatically increasing your healing efficiency. As a passive ability, Font of Vitality gives a small boost to both Stream of Life and Spirit Link, but it also allows you to refill your essence whenever a hero within three spaces rests!

Mastering the power of essence can be a difficult task, but gaining the power of a Soul Reaper means holding the power of life and death in your hands. But this is just one of the two standard classes introduced in Lost Legends, this expansion also introduces the powerful Elementalist class of the Mage archetype, allowing you to bend the very elements to your will.

The Best of Both Worlds

Originally introduced in The Chains That Rust expansion, hybrid classes allow a hero belonging to one archetype to choose a second class, belonging to a different archetype, for use during an adventure. When a player chooses a hybrid class during Hero Setup, the basic skill card will tell you to choose one additional standard class deck belonging to a different archetype. You begin with the basic skills and starting equipment from that second class deck, and may spend your experience on either class deck, allowing you to create powerful combinations unseen in Terrinoth for ages!

For example, the Trickster hybrid class belongs to the Scout archetype, but it also allows you to choose a standard class from the Mage archetype, creating a crafty magic user who uses wits and trickery to outmaneuver their foes.

For example, Now You See Me is a two-experience class card that can get you out of a tight spot. When you are targeted by an attack, a hero within five spaces may choose to switch spaces with you, getting you out of trouble while strategically moving your pieces around the board!

Focusing your efforts on your Trickster spells could even lead to the secrets of Arcane Fusion , an expensive ability that allows you to fuse the abilities and traits of one weapon to another. It will take careful planning throughout your adventure, but forming one super weapon could prove to be overwhelming to any monster who stands in your way.

Of course, there aren’t the only tools you’ll have at your disposal. You’ll also have the powerful tools of the Mage class you choose. From the deceptive Conjurer to the conniving Necromancer, pairing the Trickster hybrid class with these tools can spell doom for the terrors of Terrinoth. And since that's just one of the hybrid classes included in Lost Legends, just imagine what secrets and synergies exist within the other combinations!

Legacy of the Lost

For ages, these ancient techniques have remained lost to the heroes of Terrinoth. Now, this fountain of knowledge has been rediscovered. Will you use it to venture into the dark and become a hero in the realm of Terrinoth?

C$10.95
Out of stock
Article code 9781616618308
With Lieutenant Packs for Descent: Journeys in the Dark Second Edition, you can replace the game’s lieutenant tokens

C$10.95
Out of stock
Article code 9781616618315
With Lieutenant Packs for Descent: Journeys in the Dark Second Edition, you can replace the game’s lieutenant tokens

C$19.95
Out of stock
Article code 9781616618322
With Lieutenant Packs for Descent: Journeys in the Dark Second Edition, you can replace the game’s lieutenant tokens

Descent - Journeys in the Dark Second Edition: Oath of the Outcast Expansion

C$42.95
Out of stock
Article code 9781616618339
Oath of the Outcast introduces four heroes and three monster groups previously only available in the first edition of Descent: Journeys in the Dark

C$42.95
Out of stock
Article code 9781616618346
Crown of Destiny offers four noble heroes, ready to stand between the overlord and the people of Terrinoth: Corbin, Lindel, Jaes the Exile, and Brother Gherinn

Descent - Journeys in the Dark Second Edition: Crusade of the Forgotten Expansion

C$42.95
Out of stock
Article code 9781616618360
You’ll find eager adventurers and deadly monster groups in Crusade of the Forgotten, the third Hero and Monster Collection expansion for Descent Journey in Dark

C$42.95
Out of stock
Article code 9781616618391
Visions of Dawn offers ten plastic figures previously only available through the first edition of Descent.

C$49.95
Out of stock
Article code 9781616618865
Manor of Ravens invites you to travel to a haunted manor house and battle the guardian that waits within.

C$16.07
Out of stock
Article code 9781616619282
In the Forgotten Souls expansion, the overlord is replaced by an overlord track and a deck of monster activation cards, which control monsters in the dungeon.

C$18.95
In stock
Article code 9781616619305
Dark Elements simulates a mini-campaign in one session, inviting up to four heroes to play against monsters and traps controlled by the game.

Quickview
Fantasy Flight Games
Descent - Journeys in the Dark Second Edition: Dark Elements Expansion
Dark Elements simulates a mini-campaign in one session, inviting up to four heroes to play against monsters and traps controlled by the game.
C$18.95
By using our website, you agree to the use of cookies. These cookies help us understand how customers arrive at and use our site and help us make improvements. Hide this message More on cookies »