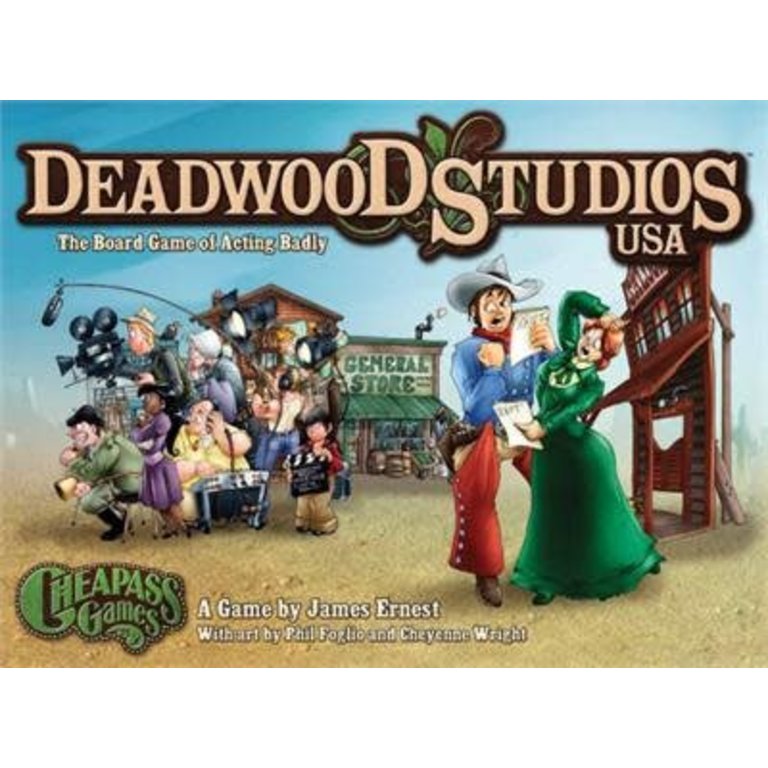 Deadwood Studios, USA is the board game of acting badly. You're an actor on a tiny Western backlot, trying to make a living in the bad movie business.

Deadwood was originally a black-and-white game, released in 1999, when it was nominated for an Origins Award for Best Board Game. The 2013 edition is a complete re-vamp, with updated rules, high-quality components, and all-new artwork from comic legend Phil Foglio.

The game takes place over four "days." Players use dice as pawns, with the number on the die representing the player's rank as an actor (this value goes up throughout the game). You move from set to set, taking acting roles and earning money and fame. At the Casting office, you can spend your loot to gain a higher rank, which in turn gives you better-paying roles.

Deadwood Studios, USA is a rip-roaring good time, filled with simple but interesting decisions, and lots of opportunities for play-acting. So what are you waiting for? Your line is "AAAIIIGGGHHH!"

Game Details:
Contents: 4 modular board sections, 6 player dice, 6 rolling dice, 60 cards, and 216 counters (money, fame, etc).
By using our website, you agree to the use of cookies. These cookies help us understand how customers arrive at and use our site and help us make improvements. Hide this message More on cookies »