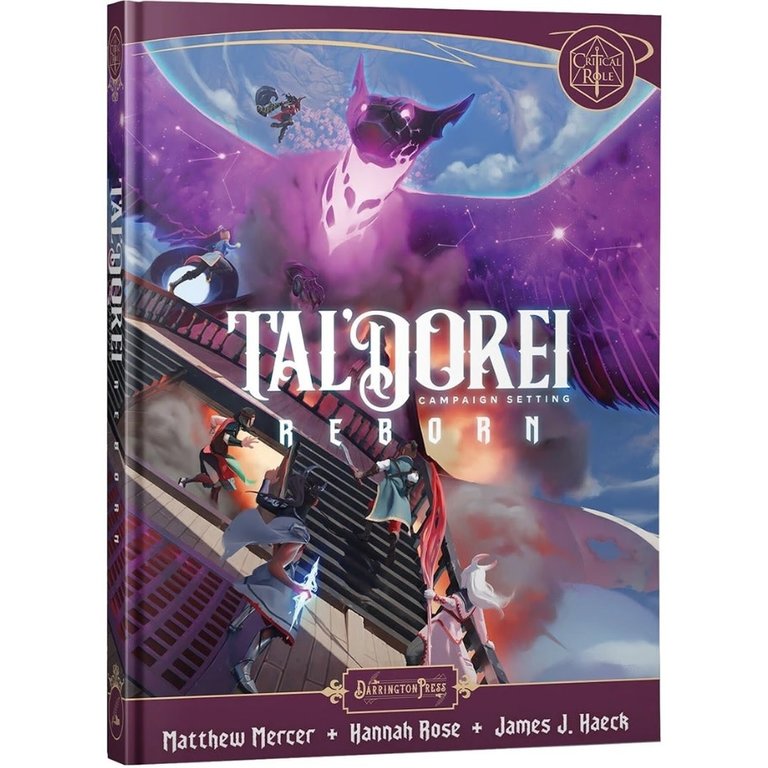 The hit series Critical Role first explored Tal’Dorei, a fantasy-filled land brimming with tales of heroes and wonder, through the epic adventures of Vox Machina. Now, players everywhere can live the magic and stories to rival the beloved show.

Soar on a skyship from the metropolis of Emon to the distant haven of Whitestone, venture into wilderness rife with terrifying monsters and wayward mages, and uncover magic items that range from simple trinkets to the legendary Vestiges of Divergence. Explore dazzling new subclasses and backgrounds in your epic adventures in the world of Exandria and beyond! Tal’Dorei Campaign Setting Reborn holds a wealth of playable content, lore, and artwork to inspire. The adventure begins here!

Tal’Dorei Campaign Setting Reborn contains everything needed to unlock the rich setting of Tal’Dorei and make it your own:

Back to home
Green Ronin Publishing

out of stock
Quickview
Green Ronin Publishing
Critical Role Tal'Dorei Campaign Setting (5e Compatible)
You can explore these realms in a tome from the pen of Game Master Matt Mercer himself!
C$43.95
Gale Force Nine

C$12.95
Out of stock
Article code 9420020242722
This representation shows Arkhan in the aftermath of this fateful battle with Vecna.

out of stock
Quickview
Gale Force Nine
D&D Collector's Series: Critical Role - Arkhan The Cruel
This representation shows Arkhan in the aftermath of this fateful battle with Vecna.
C$12.95
Wizards of the Coast

C$59.95
In stock
Article code 9780786966912
Explorer’s Guide to Wildemount provides everything you need to play Dungeons & Dragons on the continent of Wildemount (set within the world of Exandria)

Quickview
Wizards of the Coast
Dungeons & Dragons 5e Explorer's Guide to Wildemount
Explorer’s Guide to Wildemount provides everything you need to play Dungeons & Dragons on the continent of Wildemount (set within the world of Exandria)
C$59.95
By using our website, you agree to the use of cookies. These cookies help us understand how customers arrive at and use our site and help us make improvements. Hide this message More on cookies »